Plus, sustainability leaders should start talking more about solutions.

It may sound counter-intuitive, but British-schooled Helen Clarkson became an accountant so she could get into humanitarian work. It was a way to bide time until she was old enough to step forward into the field for Médecins Sans Frontières.

It was far abroad, working as a finance coordinator and project manager in places such as Pakistan, Nigeria and the Democratic Republic of Congo, that she had the epiphany that led her into the business world. There, Clarkson witnessed firsthand the irrefutable link between the human condition in emerging economies — including sexual violence toward women, systemic health problems, economic woes and other psychosocial issues — and climate-related phenomena such as water shortages, extreme weather and rising sea levels.

"You’ve got women who have economic problems that are manifesting as health problems," she told GreenBiz. "I realized, oh, your health isn’t just 'I picked up a bug'; it’s completely a facet of the system you’re in. And then it was easy to see that if the rains were good or bad, it would have an impact on the economy, which affects health. And so, suddenly, it was like that sustainability triangle just formed in my head." 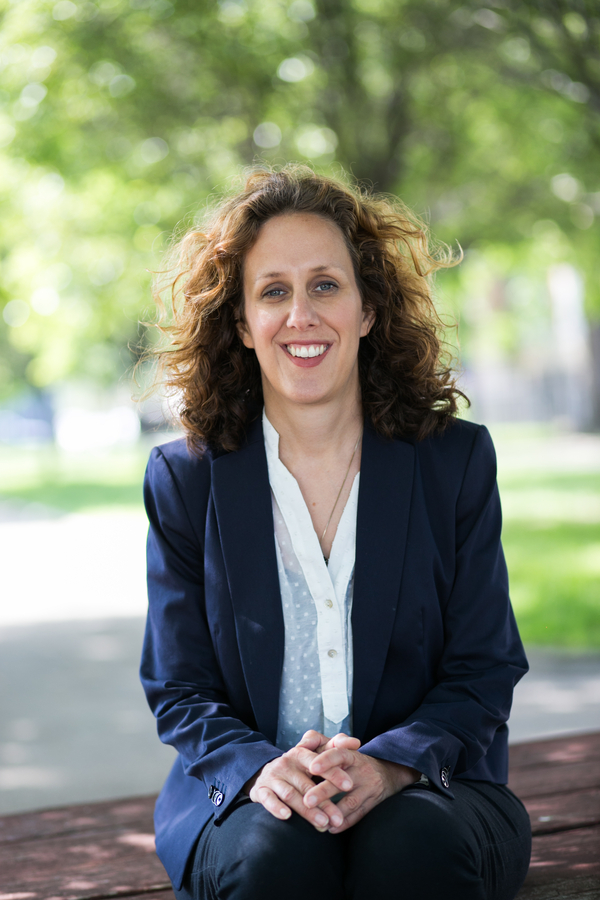 Today, that triangle is part of Clarkson’s leadership philosophy as CEO of the Climate Group, a position she has held since March 2017. She was brought in at a critical juncture for the 14-year-old organization, after leading the U.S. office for think tank and strategy non-governmental organization Forum for the Future. Originally founded to help communicate the business case for companies to focus on climate mitigation and other environmental issues, the Climate Group has a mission to help amplify and accelerate those efforts.

"What the Climate Group is good at is bringing together big networks, making them make very meaningful commitments and then helping them achieve those," Clarkson said.

The NGO’s closest allies include its five partners in the We Mean Business Coalition, all of which are positioned in some way to help companies turn addressing environmental and social issues into credible business strategies: B Team; BSR; CDP; Ceres; the Prince of Wales Corporate Leaders Group; and the World Business Council for Sustainable Development.

Much of its current work is aligned around three signature programs:

All three of these efforts share a common vision: encouraging corporate actors to commit to strategies that will help contribute to the cause of limiting global warming below 2 degrees Celsius, the goal trumpeted by the Paris Agreement.

Making such declarations is kind of like going on a diet and revealing that goal on Facebook versus keeping it to yourself, Clarkson joked. "We use communications to really amplify when people are doing well," she said. "So, we kind of reward the good behavior."

Why is that 100 percent commitment number so important? "You could make a 90 percent [commitment] within a company and everyone will think that what they are doing will fall within the 10 percent," she said. "So you think, ‘That doesn’t really apply to me.’ If a company makes a commitment to 100 percent, then everyone has to do something. And what we see then is that companies tend to move faster than they said they would."

So far, the campaign receiving the most praise (in part because it’s the most established) is the RE100. One-quarter of the members had reached their 100 percent renewable electricity goals by the end of 2016, according to a progress report (PDF) published by the Climate Group in late January.

On average, the participating companies are sourcing about one-third of their electricity from renewable sources. That’s actually lower than in previous years, reflecting the fact that some newer members are less mature in their corporate renewable energy strategy.

The proportion of procurement being sourcing through power purchase agreements grew fourfold during the year studied — representing 2.36 million megawatt-hours of consumption.

If a company makes a commitment to 100 percent, then everyone has to do something. And what we see then is that companies tend to move faster than they said they would.

"Our target date for 100 percent renewables is 2035," Vince Digneo, sustainability strategist, corporate responsibility for RE100 member Adobe, stated in the report. "This might seem a long way off, but Adobe is focusing on direct and open access renewable energy — this means that the energy we purchase is adding directly to the local power grid. This process will take us more time than using carbon offsets or unbundled renewable energy certificates (RECs), but we think it’s worth it."

The EV100 initiative, launched in fall 2016 during Climate Week with 10 members, had 16 companies on board at latest count, most of which are based outside the United States. The four newest members are airline Air New Zealand, electricity generator Mercury (also from New Zealand), Dutch engineering firm Royal HaskoningDHV and Japanese shopping center operator AEON Mall.

Mercury, which has converted 80 out of its 114-vehicle fleet to electric, is using its membership to help catalyze adoption in its country. "Around 90 percent of New Zealand’s electricity is produced from clean renewable sources, so it’s a winning formula for drivers, for business, to reduce greenhouse gas emissions, and to reduce dependence on imported fossil fuels," said Fraser Whineray, CEO of Mercury, in the press release announcing his company’s membership.

The EP100 is growing much more slowly, Clarkson acknowledged. According to the member list, 13 companies are involved — that’s just one more than in May, when the effort reached its one-year anniversary. The latest member is India company Dalmia Cement.

"I think one of the things we’re going to start doing is more exploration around is the notion of energy productivity," Clarkson said. "Because as you explain to people what it is, of course, that’s what companies want to do. And there’s a lot of work already happening, such as LED lighting programs."

Keep your eyes on work in China and India

If you look at the headquarters locations of the companies involved in the Climate Group’s core campaigns, you’ll see plenty of European and U.S. representation, although there are outliers from Asia. But the NGO is stepping up its presence in China, where last year it hired a new director, and India, where it expects to play a role in facilitating energy access.

"So really it's about the same sorts of priorities but adapted a bit for the different markets," Clarkson said. "In both places, central government sign-off is more important than maybe it is [in the United States or Europe], so we're doing more work probably in the national governments there, to try and get them lined up." 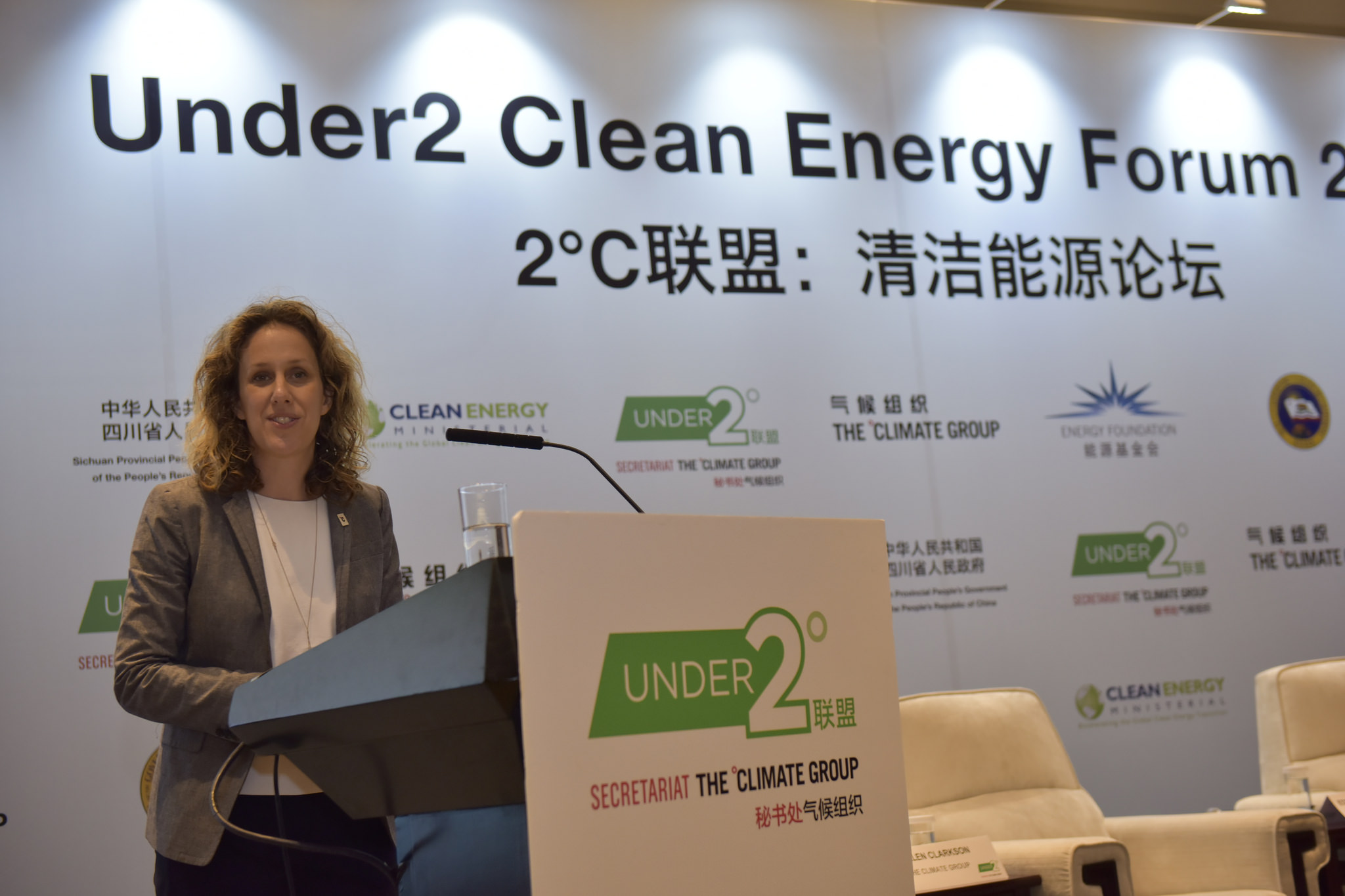 For one thing, you can expect a strong focus on electric vehicles in both countries, which entertain grand adoption ambitions when it comes to low-carbon transportation.

Aside from its work at the national level, the Climate Group is secretariat for the Under2 Coalition, which represents more than 200 sub-national governments that are working on strategies to reduce their emissions to net-zero levels (or near) by 2050.

The importance of clear-sighted optimism

One of Clarkson’s ongoing missions is to get companies talking more loudly and more often about their progress — and, if relevant, their mistakes — in meaningful business language and real-world scenarios. The climate community has done an extremely effective job communicating that climate change is happening, she observed, and it’s time to talk up the solutions.

"I wouldn’t sit down and endlessly point someone to the science," she said. "If there are doubts from business, it’s going to be around the business case. If they’re skeptical, it tends now not to be in the boardroom where people are skeptical about climate change. It feels like it’s really shifted there in the last few years. It’s much more, ‘Is this too expensive for my business?’ And there, it’s actually getting into the business case and actually showing what peers are doing. In that sense, I think that people are much more likely to listen to their peers than listen to an outsider. How do you make sure that those voices are getting across?"

That’s one reason the Climate Group is supporting Climate Optimist, an opt-in communications campaign spearheaded by marketing firm Futerra that encourages messages of hope rather than despair.

While the social media effort is focused primarily on consumers, not its traditional corporate audience, it speaks to the NGO’s broader desire to communicate what’s working instead of endlessly repeating what’s not.

"If you want to create social change, you have to believe that you can," Clarkson said.