Why climate-saving investments in cold chain technologies are hot

As the global population increases and rapidly urbanizes, the demand for vegetables, meat, seafood and other perishable food is exploding.

This demand can be met only by freezing fresh food as close to the source as possible, storing the perishable food until it can be shipped and delivering it safely to the consumer in refrigerated transportation by what is known as the cold chain. A second major driver of demand for refrigeration is the increased use of vaccines, hormone treatments, complex proteins and other heat-sensitive biopharmaceutical products that are growing at two times the growth of the pharmaceutical industry.

The cold chain to deliver these products involves huge refrigerated warehouses, massive numbers of cold containers for transport by sea or air, and fleets of refrigerated trucks. According to Stratistics MRC, the global cold chain market is projected to grow 400 percent from $152.7 billion in 2018 to $608.4 billion in 2027.

Unfortunately, the energy required to maintain these cold and cool environments and the negative impact on the climate is stunning. The refrigerants used to freeze food, hydrofluorocarbons (HFCs), have a negative impact on climate that is thousands of times greater than carbon dioxide.

According to Project Drawdown, the poor disposal and displacement of the chemicals used for refrigeration will be the No. 1 cause of an increase in greenhouse gas (GHG), with food waste as the third-largest contributor to GHG emissions, contributing 89.74 gigatons and 70.53 gigatons, respectively. The combined negative GHG contribution of refrigerant chemicals and food waste is more than three times the total carbon dioxide emissions of 49.5 gigatons estimated by the Intergovernmental Panel on Climate Change (IPCC).

Reducing the 40 percent of food loss that occurs post-harvesting and processing could increase the global food supply by 15 percent, according to the Food and Agriculture Organization (FAO). With more than 800 million people going to sleep at night hungry and as much as 80 percent of the food produced in developing countries rotting before it can reach the hungriest populations, we need to invest in innovative technologies and logistics to mitigate massive food loss, widespread hunger and the negative impact on the climate.

The combined negative GHG contribution of refrigerant chemicals and food waste is more than three times that of global carbon dioxide emissions.

The global cold chain is dominated by less than 20 companies; fortunately, they are investing heavily in finding and integrating innovative solutions into their infrastructure.

Two companies in particular, Lineage Logistics and Americold Logistics, have become the global leaders of cold storage in the last five years with aggressive roll-up strategies. These major incumbents, as well as end-users such as Walmart, are actively engaging with innovative technology companies seeking to optimize logistics.

Walmart uses blockchain to track and manage food recalls; airports and ports in the Middle East manage perishables with robotics and sensors to move perishable foods from ship-to-plane-to truck; supermarkets replace toxic refrigerant chemicals for their in-store coolers with organic solutions such as transcritical CO2.

Examples of early-stage technology companies leading improvement in the cold chain include Viking Cold, which lowers energy costs with a control system of eutectic plates; Axiom, which provides advanced sensors and control systems; and SmartSense, which uses the internet of things to monitor facilities and provide supply chain visibility.

Improved logistics certainly can help prevent food from rotting, but these solutions cannot chill the food using less energy or curb the negative impact of cold chain refrigerants. We also need to invest in breakthrough technologies to freeze and transport foods.

The dominant technology for freezing food, known as vapor compression, was invented more than 150 years ago. Vapor compression is an energy-intensive technology that creates cold by compressing a refrigerant such as freon or CO2 into a liquid phase and then expanding it into a gas phase in what is called a thermodynamic phase change cycle. When the liquid expands, it becomes colder and that cold is then blown into the refrigerator or air conditioner.

The cold chain industry has accepted the energy inefficiency of vapor compression primarily because the technology can scale from refrigerated warehouses to trucks, and because developing more energy-efficient phase change cycles is technically difficult.

However, there are some incredible innovators such as Rebound Technologies, which has developed a new phase-change cycle that creates cold by chilling a slurry mix of water and salt that can be as cold as minus-40 degrees Fahrenheit — that's 72 degrees colder than the freezing point of water. (Disclosure: Rebound Technologies is a portfolio company of Clean Energy Ventures, the author's firm.)

The systems from Rebound Technologies allow refrigerated warehouses to freeze food faster at a lower cost, without using any harmful hydrofluorocarbons. Other companies have developed disruptive technologies to transport food, including Dearman Technologies, which replaces a truck’s vapor compression system with liquid nitrogen system below minus-320 degrees F to maintain cool temperatures for long periods of travel; and Carnot Refrigeration, which replaces refrigeration systems that use environmentally unfriendly chemicals with CO2-based systems.

The negative impact of the cold chain has been grossly overlooked in discussions of how to mitigate climate change. One cause of this disregard is a perceived lack of agency to do anything about the technologies in the historical cold chain.

For the last 50 years, there has been virtually no innovation in cold chain technology, and a pall of complacency became embedded in the sector. As incomes rise and demand for protein increases in emerging markets, demand for cold chain infrastructure is exploding, with China and India experiencing 25 percent growth per year.

Fortunately, the urgent need for better, faster and cheaper cold chain solutions is dissipating the complacency, with new commitments to innovative solutions from industry players such as Lineage Logistics and Americold, as well as new mandates and subsidies by governments in India and China to support the innovators seeking solutions. 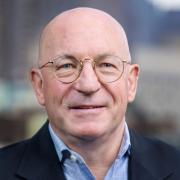 See all by Temple Fennell