Why a Coal Guy is Going Green

And yet…Jim Rogers, Duke’s longtime president, CEO and chairman, is pushing as hard as anyone in corporate America to get a climate-change bill passed by Congress. His company helped the U.S. Climate Action Partnership get going, and he was key in getting some (but not all) utility-company CEOs to support carbon regulation.

“We’re very focused on legislation getting done in the U.S. this year,” Rogers says.

"We’re in the most transformative period in the history of the power industry, Our mission is to decarbonize our entire fleet."

I sat down with Rogers recently after he spoke at the Society of Environmental Journalists conference in Madison, Wisconsin. He’s a pleasure to interview -- he answers questions, he’s direct and he’s charming. (He used to be a newspaper reporter so he knows how to tell a story, too. You can listen to excerpts of our talk in a podcast at The Energy Collective, where I’m a lead blogger. ) By the end of our conversation, I had a better understanding of why Rogers and Duke have become advocates of a cap-and-trade scheme to regulate global warming pollution.

Rogers, who is 62, has been a utility-company CEO since 1988. He’s also been a consumer advocate (as an assistant attorney general in Kentucky) and a federal regulator (at the FERC) so he sees issues from different perspectives.  More important, Duke Energy is, for the most part, a regulated utility -- meaning that its major investments and electricity rates must be approved by state public utility regulators. So if Rogers can convince those regulators that his investments in low-carbon power generation make sense, he should be able to make a good return. 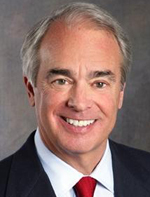 “Moving to a low carbon world is an earnings opportunity for me,” Rogers said. “If I have to retrofit my fleet, that’s earnings growth.” That’s assuming, of course, that state regulators will permit him to raise rates for customers to cover the costs of renewable power, cleaner coal or new nuclear plants.

This helps explain why Rogers doesn’t try to pretend that the transition to a low-carbon world will be easy or cost-free. He needs to set the stage for future price increases that he knows are an inevitable. He says:

Certainly Duke’s plans are ambitious. The company wants to spend about $20 billion to build two nuclear plants, whose ownership would be shared with other utilities and major customers. “Nuclear is key to our ability to produce baseload electricity with zero greenhouse gas emissions,” Rogers says.

Duke also plans to build two coal plants, at a cost of $5 billion, one in Indiana that would be designed so that it could capture and store carbon, the other a conventional but highly-efficient plant in North Carolina. The North Carolina plant, called Cliffside, has generated lots of opposition, but Rogers says it’s needed to enable him to shut older plants that generate more local pollutants.

“I have to balance affordability, reliability and clean,” he says.

Duke also would like to invest about $1.5 billion in gas combined-cycle plants, which have lower emissions than coal plants, another $1 billion on wind farms spread across 14 states, another $1 billion on so-called smart grid technology and smaller amounts on rooftop solar, biomass and landfill gas. The company is also aggressively promoting energy efficiency to homeowners and businesses.

Interestingly, Rogers confounds critics at both extremes of the energy and climate debate. Some other utility company CEOs think he has been too quick to embrace carbon regulation, while environmentalists fault him not only for wanting to build new coal plants but for his blunt talk about costs and skepticism about the claim that carbon regulation will create green jobs.

“I think it’s a mistake for us to talk about the green jobs that will be created from renewables,”  he says.  “We run the risk of misleading the America people.”

Rogers can’t afford to promise more than Duke can deliver, if only because he needs to prepare his regulators and customers for the shocks ahead. Indeed it’s striking the degree to which Duke’s business depends on elected officials and regulators in Washington and the state capitals who make energy and climate policy, set utility rates and determine his rate of return.

“I say to people that I’m in the power business,” Rogers observes.

“Electricity is only a byproduct.”