Why companies get their carbon footprints wrong

Why companies get their carbon footprints wrong

That is the stark warning contained in a new report (PDF) from consultancy WSP Parsons Brinckerhoff, which argues many businesses are failing to adequately account for the significant daily and seasonal fluctuations in energy-related carbon emissions.

The report argues using averages to calculate the carbon footprint of a business or building could result in a distorted picture for corporate and policy decision-makers, especially as smart grid technologies promise to make it easier for organizations take advantage of the periods when energy is at its cleanest.

The study details how the carbon intensity of grid power varies significantly on both a month-by-month basis and throughout the day.

According to the report, carbon intensity peaks at 400gCO2/Kwh for a few hours a day in January and can fall as low as 200gCO2/kWh in August. These fluctuations could become even more pronounced as more intermittent renewable energy comes on to the grid. 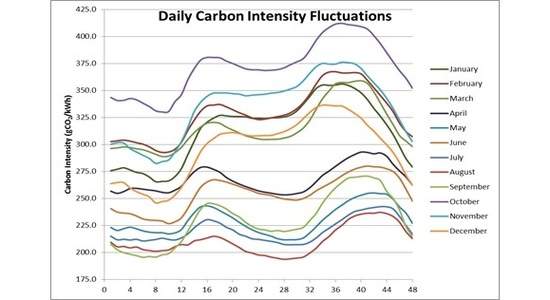 "In winter evenings, carbon-intensive energy (such as coal) is required to meet the demand for electricity in homes, which isn't as high in summer afternoons, when cleaner energy such as solar is more common," the report states. "Therefore turning on the television in the middle of the day in summer will have far lower carbon emissions than during the evening in winter."

The report also warns that the widespread use of daily and annual averages to calculate carbon emissions could result in policies that inadvertently undermine the roll out of energy storage and demand response technologies that are designed to better match supply and demand and make it easier for consumers to use the power generated by renewables.

WSP Parsons Brinckerhoff cites the example of the Climate Change Levy, which charged per kWh amount of electricity or gas we use, regardless of when the energy is used.

"The environmental implication is that two buildings or businesses using the same amount of energy could be unknowingly producing very different levels of carbon emissions whilst being charged the same amount through the climate change levy," the report explained.

"Further, companies that are trying to reduce CO2 emissions by using energy storage measures will be paying more in Climate Change Levy and reporting higher CO2 emissions than those that aren't, as calculations are based on how much energy is used, not when it is used."

Barny Evans, sustainability and energy expert at WSP Parsons Brinckerhoff, said businesses needed to be aware of how their carbon footprint could vary based on the time at which they consume power.

"Buildings and businesses are under increasing pressure to meet legal requirements to reduce emissions, but it's not as simple as counting a single number," he warned. "Organizations with specific goals such as carbon neutrality will find their current accounting is unknowingly leading them to take policies and actions that result in higher or lower carbon emissions than they realize."

He argued plans to deliver smarter energy grids would benefit from a better understanding of when energy has the highest levels of carbon intensity.

"As technology advances and the grid decarbonizes we need to move to a system that better recognizes the benefit of carbon reducing measures including energy storage and demand reduction," he said. "By taking into account when energy is being used we will have the opportunity to not only work out how to reduce carbon emissions but also our bills."

Are our cities about to get a lot smarter (and greener)?