Why fleet managers at Anheuser-Busch, KeHE Distributors are fueling up with renewable natural gas

Companies of all sectors and sizes seek ways to reduce emissions across the board and increasingly are taking a far closer look at the kind of fuel powering their vehicles. While much attention has shifted to the potential for battery-electric or hydrogen vehicles, another technology with a vast infrastructure — renewable natural gas — is gaining traction among fleet managers.

"I’ve personally worked on energy issues for 10 years, and I’ve been extremely excited about the progress that’s been made in renewable natural gas," said Sam Wade, director of state regulatory affairs with the Coalition for Renewable Natural Gas, during a recent GreenBiz webcast exploring this trend. The discussion focused on the growth of renewable natural gas for fleets of different sizes, the production of it and how it may continue to gain popularity.

Renewable natural gas (RNG) is natural gas made from methane, often from methane gas produced at landfills but also from farms. Methane that otherwise might be released into the air and produce more greenhouse gases is either stored or sent through a pipeline to be refined and made into fuel for vehicles. And it has an environmental aspect to it because the world still produces plenty of organic waste.

While renewable natural gas has environmental benefits, it has a significant edge over EVs and hydrogen in one key area: It’s available now with a vast infrastructure.

"The fact that all the infrastructure is already there for RNG makes a big difference when we consider it," said Angie Slaughter, vice president of sustainability, logistics, SVC and capabilities procurement for Anheuser-Busch, during the discussion.

The fact that all the infrastructure is already there for RNG makes a big difference when we consider it.

Anheuser-Busch has set a goal of reducing its supply chain emissions by 25 percent by 2025. The beverage maker has converted its truck fleets in Houston and St. Louis, Missouri, to run on renewable natural gas and sees positive results so far, Slaughter said.

Anheuser-Busch has announced a deal with Nikola to acquire 800 of its hydrogen-electric trucks and large companies including Walmart have agreed to bring on the battery-electric Tesla Semi unveiled in 2017. But neither vehicle has been seen in anything other than prototype form, so no deliveries have been made.

"A lot of things are advancing, but where I see the biggest benefit with RNG is on the infrastructure side it’s already there and exists," Slaughter said. "With some of these other technologies, we need to build it out and figure it as a country."

"We were able to secure the right grant funding to make these trucks economical," said Tom Harden, senior manager of Fleet Assets for KeHE Distributors. "As for the fuel benefit, we’re seeing reduced fuel usage and cost by partnering up with Clean Energy. It made it very easy to move forward with Clean Energy like this." (Clean Energy is a provider of renewable natural gas fuels.)

Harden said a learning curve was involved with transitioning to renewable natural gas, such as making mechanics comfortable with the vehicles and then teaching the drivers to do light maintenance. And then getting the drivers used to the quietness.

The issue of subsidies also will play a role, but Wade believes federal programs will stay in place no matter the political climate, and states are increasingly adopting incentives that California and Oregon have to bring renewable natural gas to the price of diesel today.

"From 2014 to 2019, we had very dramatic growth and over 400 million gallon equivalents in that period," he said. "In the last 12 months, the industry has added more RNG production facilities than it did in the last 31 years. Regardless of where you are, there’s probably an RNG facility near your fleet." 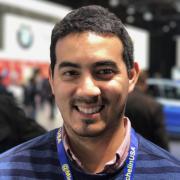 Could Bloom fuel cells be a solution for maritime emissions issues?

See all by Zac Estrada