This article was sponsored by the National Cattlemen's Beef Association, a contractor for the Beef Checkoff.

We have a grand challenge ahead in the next three decades. Our global population is projected to increase by 2 billion, yet we will not have an appreciable increase in agricultural land. Our challenge is to nourish a global population of increasing affluence without degrading the earth’s resources or compromising the success of future generations.

Key to this effort is doing more with less, or improving the productivity of agriculture. Over the past several decades, both plant and animal agriculture in the United States have made gains in improving outputs, such as beef production or corn yields, per animal and per acre. Many times, these improvements are beneficial to all or both commodities. For beef, improvements in the productivity of crops used as feeds for cattle, such as corn, have reduced the land requirements to produce beef.

The acres of harvested corn grain required to produce grain-finished beef cattle has declined 46 percent over the past 4 decades.

For example, the acres of harvested corn grain required to produce grain-finished beef cattle has declined 46 percent over the past four decades due to improvements in corn yields per acre (Table 1). Additionally, we’re able to produce 9 percent more beef with 29 percent fewer cattle due to improvements in cattle genetics, cattle nutrition and health, and the use of technologies from herd management software to vaccines. Productivity improvements in plant and animal agriculture work synergistically to reduce input requirements for producing food. As a result, U.S. beef’s carbon footprint is 10 to 50 times lower than beef produced in other regions of the world.

Table 1. Changes in U.S. agriculture and population from 1975 to 2017. All data are from the U.S. Department of Agriculture and the U.S. Census Bureau

This synergistic relationship is helpful to sustainability efforts because most environmental impacts for beef production and other agricultural commodities happen at the farm or ranch level. For example, most greenhouse gas (GHG) emissions associated with beef production occur from the animal themselves (the methane they naturally belch up), their manure and from feed production. Consequently, reducing cattle numbers required to meet beef demand is a key environmental sustainability metric.

In the U.S., per capita beef availability, our proxy for consumption, has declined. Beef consumption peaked at 3.0 ounces per person per day in 1976 and largely has declined since then to 1.8 ounces today. For a frame of reference, a serving size of beef is typically considered to be 3 ounces. Some argue the decline in beef consumption per capita is causing a decline in GHG emissions; however, this is incorrect. GHG emissions have declined from U.S. beef because of improvements in productivity at the farm or ranch level. For example, if we produced the 26 billion pounds of beef as we did in 2017, but did so with 1976 productivity, we’d need a U.S. cattle herd of 129 million — 45 percent larger than today’s herd (Figure 1). Relying on the production practices of yesteryear would mean more GHG emissions for the same beef, even though per capita beef consumption still would have declined due to a growing U.S. population. Essentially, spreading an equivalent amount of beef across more Americans’ plates does nothing for GHG emissions unless beef production practices improve.

Figure 1. Productivity has driven down U.S. beef’s environmental impacts over time, not declining per capita beef consumption per capita. If productivity remained unchanged from 1976, the U.S. would have required 129 million cattle to meet beef demand in 2017, despite a 40 percent drop in per capita beef consumption. Data and calculated herd size are from U.S. Department of Agriculture and U.S.  Census Bureau sources.

The power of productivity to improve sustainability holds at the global scale as well. Estimates vary, but the global population likely will reach between 9.5 and 10 billion people by 2050, and global meat demand likely will grow per person as average incomes rise around the world, especially in developing nations. That said, the growth in meat demand likely will not be the same across animal proteins. In the past five decades, global beef consumption per person has remained relatively flat, while pork and poultry consumption grew 100 percent and 420 percent, respectively, according to data from the U.N. Food and Agriculture Organization.

So, what does that mean for the 2050 challenge for beef — can we meet the demand of over 9.5 billion people and still cut the environmental impacts of beef? It’s possible, but we’ll need to improve beef’s productivity globally.

This is visualized in Figure 2. The scenarios depicted assume a 2050 population of 9.8 billion and an increase in per capita beef consumption of 10 percent, which may be higher than historical trends suggest, but for this thought experiment, we’ll assume increasing beef consumption to make our estimates of global cattle numbers more conservative (err of the side of "worst case"). If we keep our current pace of improving beef’s global productivity going, we’d need 18 percent more cattle in the world today (scenario 1). If we could achieve the rate of productivity improvements that the U.S. beef industry has accomplished historically, we could reduce the global cattle herd 20 percent relative to today’s herd (scenario 2). In this scenario, that means we’d have an annual increase of 2.2 pounds more beef produced per live animal per year, as compared to the current rate of 0.6. Scenario 3 is unlikely, but highlights the sustainability advantage of U.S. beef production compared to the rest of the world. The global cattle herd could decline 48 percent relative to today’s if we could universally produce beef around the world with current U.S. efficiency, and that’s considering 2 billion more people on the planet eating 10 percent more beef per person. 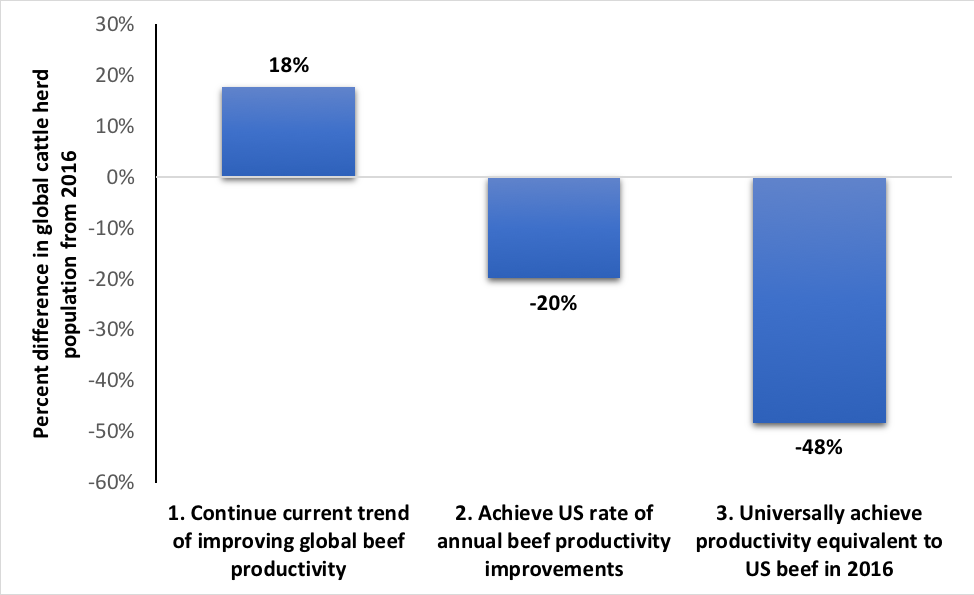 Of course, productivity advancements alone are not akin to sustainability. Productivity should be balanced with other components of sustainability that address social acceptability, economic viability and ecological health such as animal welfare, biodiversity and soil health. But productivity needs to be a part of how we sustainably nourish the U.S. and global population of the future. We can’t be sustainable in 2050 using the production practices and technology of 1950.

Sara Place, Ph.D., is senior director, sustainable beef production research, at NCBA, a contractor to the Beef Checkoff Program. She was previously assistant professor in the Department of Animal Science at Oklahoma State University. Raised on a dairy farm in Chenango County, N.Y., she received her Ph.D. in animal biology from the University of California, Davis, and her bachelor's degree in Animal Science from Cornell University