Why General Growth ranks among the top 10 solar buyers

The first thing worth noting about the sustainable business strategy of real estate investment trust General Growth Properties (GGP) is the title of the person leading it, executive vice president and chief operating officer Shobi Khan. That’s simply illustrative of the luxury-retail-store operator’s commitment to embedding environmental considerations into the management of its close to 128 properties across the United States, including the world’s largest outdoor mall in Hawaii.

"We think this makes economic and social sense," Khan told GreenBiz. "We wanted to establish a culture and really make sure that all 1,800 employees were on board."

Considering the size of GGP’s sites — typically more than 1 million square feet, although its Ala Moana Center in Honolulu is double that size — this philosophy is grounded in practical and social considerations. Utility bills represent the second biggest expense item in GGP’s operating budget, so energy efficiency, water conservation or clean energy investments are evaluated through that lens.

The impact so far is impressive. Since 2011, GGP has cut power consumption across its portfolio by about 215 million kilowatt-hours. That’s enough electricity to run the lights and appliances at all the homes in Coral Gables, Florida, for a year.

Solar where it makes sense

Just as noteworthy are the company’s investments in solar installations: as of mid-October, GGP’s generating capacity ranked it No. 9 among the Top 10 corporate owners of solar. (Another less-known company you should bone up on is Prologis, which ranks No. 3 behind Target and Walmart.) GGP currently owns about 30.2 megawatts, and the projects it still has under way eventually will push that total to more than 37 MW. That’s about one-fifth the capacity of either Target or Walmart.

Put another way: By the time GGP is done with its existing projects, it will control enough clean power to run 5,100 average American homes for one year. After this current phase, solar will blanket close to 30 properties in Arizona, California, Colorado, Connecticut, Delaware, Florida, Georgia, Hawaii, Maryland, Massachusetts, Nevada, New Jersey, New York and South Carolina.

We invest our own money, we buy the solar panels, and then own them in perpetuity.

GGP doesn’t have an explicit renewables target, Khan acknowledged. Rather, it evaluates its options on an ongoing basis, as anchor retail tenants decided to move on or redevelop, and as its buildings age, he said. It owns and manages the panels outright, just as it would other equipment acquired through capital investments.

Among the factors that will make or break an investment decision are the state or federal financial incentives in a particular region correlated against the utility rates. But as you can tell from the list above, it has been able to make the case in many states. "We invest our own money, we buy the solar panels, and then own them in perpetuity," Khan said.

As with most of its core business initiatives, GGP experimented before making a broader commitment. New Jersey and Hawaii were two of its earliest solar markets with four properties coming online in 2012 and 2013. Each of the installations in those states generate about 11 percent of the mall’s electricity needs, according to the company. So far.

Visibility down to the outlet

GGP’s not-so-secret weapon for guiding energy investments is a system that goes by the not-so-sexy moniker "Enterprise Operations Analytics" platform. Simply put, this is a software application that keeps tabs on energy consumption down to the individual outlet level, in near real time. "It sums things up for the property and the portfolio," Khan said. Anyone with a stake in managing those expenses can access the metrics.

The system has helped prioritize everything from the extensive LED lighting overhaul GGP has undertaken across inside its malls and across its parking lots (almost complete, according to Khan) to its methodical replacement of inefficient heating, ventilation and air-conditioning equipment.

We’re demonstrating to customers that we’re doing the right thing.

Pulling this off required an investment in the sensors and software used to keep tabs on that equipment. In fact, since 2012, GGP has upgraded almost 60 percent of the technology it uses for energy management, according to its most recent sustainability report. The net effect of that investment so far: GGP has replaced more than 500 inefficient systems, cutting its annual power consumption by 44.5 million kilowatt-hours. It uses guidelines outlined by Energy Star and ASHRAE (the American Society of Heating, Energy and Air-conditioning Engineers) to guide its decisions.

An obsession that extends to waste and water

Although its efforts might not have the same impact from a cost perspective, GGP is stepping up its attention to water conservation and consumption concerns. Two years ago, the company set a goal to reduce its usage portfolio-wide by 5.5 percent by the end of 2017. By last year, it was roughly halfway toward that goal, Khan said. In actual terms, it saved 64 million gallons in 2015 — the amount needed to fill 100 Olympic swimming pools.

One of the most effective tools in making this happen were the smart irrigation systems installed to handle landscaping at seven properties in California, Texas and Arizona. The technology includes controllers and keeps tabs on the zones in near real time. "They measure the weather and soil conditions and water the foliage only as necessary," Khan said.

Within the first four months of installation, the technology helped save about 10 million gallons of water at the locations where they were installed.

GGP is also using decidedly low-tech approaches to reduce its water footprint. One example comes from its Lynnhaven Mall in Virginia Beach, Virginia, where the company has been working on a multimillion-dollar redevelopment project.

The final phase involved an expansive overhaul of the parking facilities, and a new approach to stormwater management for that portion of the site, to offset the impact of land that was disturbed to make room for more cars.

GGP’s solution was to construct two bio retention ponds and landscaped islands that help water seep back into the soil more quickly. The ponds were populated with vegetation specifically selected for its ability to filter and clean the stormwater, removing substances including phosphorus. 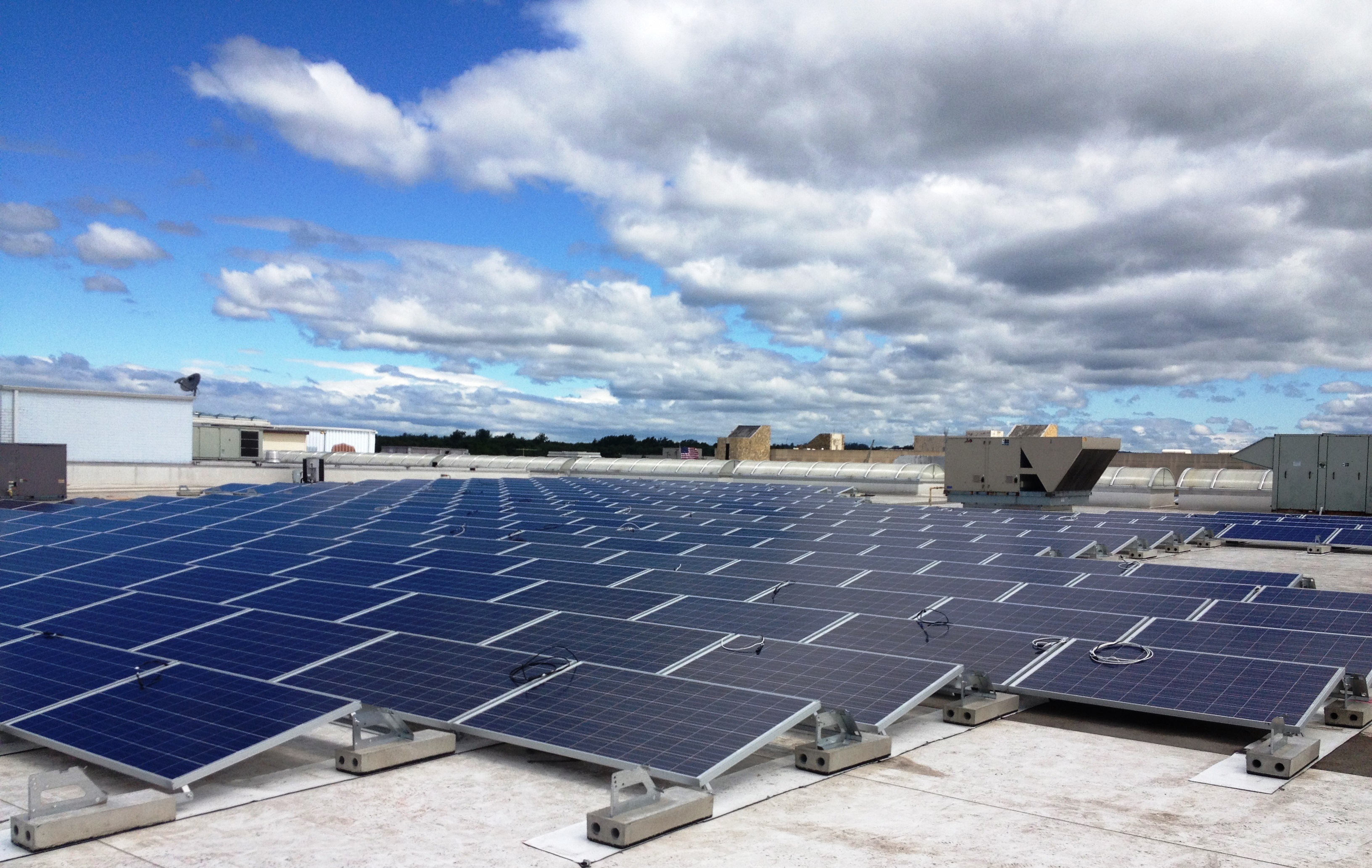 Fighting back against e-commerce

If you didn’t know about these initiatives, that’s partly a fault of GGP’s corporate culture. One of its core values is "humility," so its executives tend not to brag about achievements that believe should simply be part of business as usual. Taken together, its values create the acronym HAD TO!, which stands for Humility, Attitude, Do the right thing, Together, and Own it. "We haven’t been out there talking about what we’ve done," Khan said.

You can expect that to change, as mall operators fight the perception that e-commerce activities are somehow greener than going to the mall. Another mall operator, Simon Properties, published a report in March suggesting that many consumers fail to consider the impact of shipping emissions, packaging and product returns when considering the environmental case for each style of shopping. Many automatically assume that cybershopping is better, although Simon makes a convincing case otherwise.

To counter this perception, GGP is testing signage at its properties that highlight its investments in solar, among other things. Another way its building visibility is through the installation of electric vehicle charging stations, which Khan sees as a way to get shoppers asking more questions about the environmental impact of the retail business. (Right now, it hosts about three dozen, which hosted about 22,000 charging hours during 2015.) "We’re demonstrating to customers that we’re doing the right thing," he said.