It took less than a century for the global population to explode from less than 2 billion people to 7 billion people today. It will take a great deal more coordination to ensure that the earth’s soils are able to provide for all those individuals' growing demand for food, fuel and fiber.

A 10-step plan for soil health, presented by the Nature Conservancy at the Business for Social Responsibility (BSR) 2016 conference last week, casts hope that by partnering with big food companies, U.S. farmers will steward soils to be more productive and resilient.

As this roadmap spanning research, economic and policy shows, we have a long way to go.

"It’s important to establish a time-bound, specific goal to restore soil health in the U.S.," said Michael Doane, director of Transforming Working Lands for the Nature Conservancy. "We must change the management paradigm to put soil health at the center of management practices, not at the side. We are at a BSR conference, not a farmer’s conference, because we need business leaders and policy leaders thinking about soil solutions."

The United Nations estimates that a 60 percent increase in food production will be required by 2050. Conversely, the carbon richness of U.S. agricultural soil has declined by about 60 percent since the Industrial Revolution. Since 1875, organic matter in soils declined from 6 percent concentration to 1.4 percent organic matter  today. 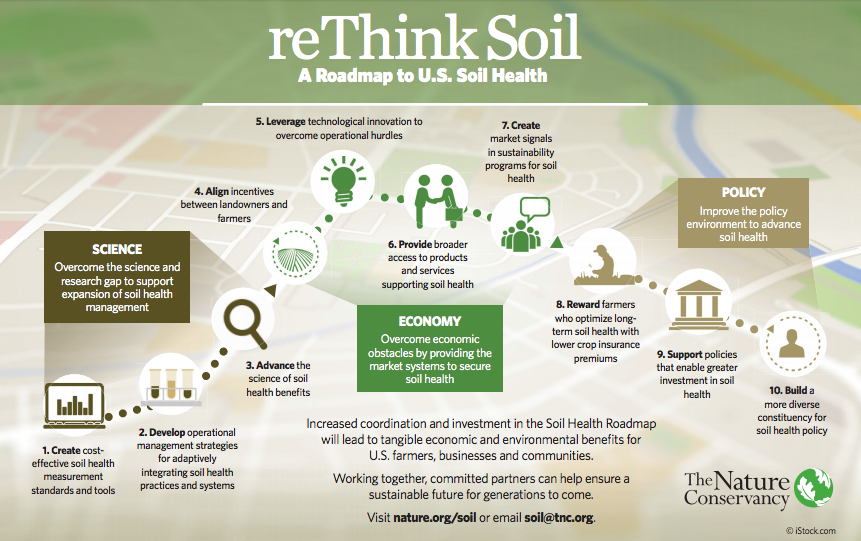 To show just how disconnected consumers have become from the earth that produces their food, the speakers placed a glass Mason jar filled with rich, earthy soil at every table at the event. Participants were invited to open the jars and smell, see and touch a substance we take for granted, but that promotes crop health and society's overall resilience.

The USDA’s Natural Resources Conservation Service defines soil health as "the continued capacity of the soil to function as a vital living ecosystem that sustains plants, animals, and humans." Components of healthy soil include carbon, calcium, nitrogen, manganese, potassium, phosphorous, sulfur and (optimally) up to 5 percent of organic matter. It also includes water, air and microorganisms like bacteria and fungi.

Poor soil management practices such as over-tilling, not planting cover crops and failing to rotate crops, lead to rapid degradation and imbalance of necessary nutrients.

And while soil degradation undermines farmer productivity and cropland resilience, it leads to other environmental impacts on a national level:

Meanwhile, the benefits of soil health are bountiful. By implementing just three management practices — reduced tillage, cover cropping and crop rotations — on half of U.S. farms by 2025, farmers can:

Together, these improvements could create a value of $7.4 billion annually for society and $37 million net annually for farmers. At full adaptation, soil health solutions can address up to $50 billion in social and environmental impacts across the U.S. Even a 1 percent increase in soil organic carbon drastically can increase topsoil’s ability to hold water by up to 12,000 gallons per acre and protect farms from drought, according to the nonprofit Soil Health Institute.

Rebalancing soil on a national level is a complex challenge that requires a "catalyst," said Doane, as many farmers don’t own their land. Instead, they are often bound by cash-lease terms for land that don’t set incentives to think about long-term soil health. This is where corporate buyers come in, as they set the heavy production demands on soil.

We may not see a significant increase in soil quality until well after the program's 2025 goal, but the economic benefits may come earlier.

General Mills, the main corporate sponsor of the soil health roadmap, is directly affected by the supply-chain risk of soil resilience. It works with a broad portfolio of suppliers who source directly from farmers — an opportunity to speak with suppliers about educating farmers about tools and services to improve soil health.

"As a global food company, it’s imperative to protect the natural resources and communities upon which our business depends. In our case, the foundation is soil health," said Jerry Lynch, chief sustainability officer at General Mills, in a statement. "The goal is to provide a thoughtful strategy, raise awareness about the critical role that soil health plays in environmental sustainability and to encourage transformation in agricultural supply chains. We cannot do this alone. But together, we can get on a path to healthier soil and more sustainable agriculture systems."

The roadmap to U.S. soil health starts with science to overcome the data and research gap to support expansion of soil health management. Among the aims:

It moves into overcoming economic obstacles to provide market systems to support long-term soil health. Among them:

Farmers do things for efficiency, but it’s not always the best for soil or water.

A significant increase in soil quality may not be evident until well after the program's 2025 goal, but the economic benefits may come earlier. Tim Smith, an Iowa farmer implementing TNC-promoted soil health practices, spoke at the presentation about long-term soil health benefits, likening it to a cultural shift.

"Farmers do things for efficiency, but it’s not always the best for soil or water," he said. Yet broader thinking about soil health has helped protect his soils from erosion, absorb rainfall to reduce flooding and reduce impact on water quality be reducing nitrate and phosphorus loss.

Managing U.S. croplands for soil health is a low-cost, high-value cause for society. The science, economic and policy structures to support soil health, however, require intense investment and collaboration. The roadmap to soil health and resilience may be long. The hope is that cooperation among farmers, suppliers, consumers and corporations will get us there.