Why W Hotels, GM and a craft brewer are swapping trash in Austin

Why W Hotels, GM and a craft brewer are swapping trash in Austin

Andrew Mangan has made a career out of trying to monetize the leftover materials cast off by businesses.

Mangan's U.S. Business Council for Sustainable Development grew out of a discovery in the 1990s by Chapparal Steel President Gordon Forward that an industrial byproduct, steel slag, actually could double as a base ingredient for cement.

It was a handy realization because Chapparal's parent company, Texas Industries, was also a huge cement manufacturer. 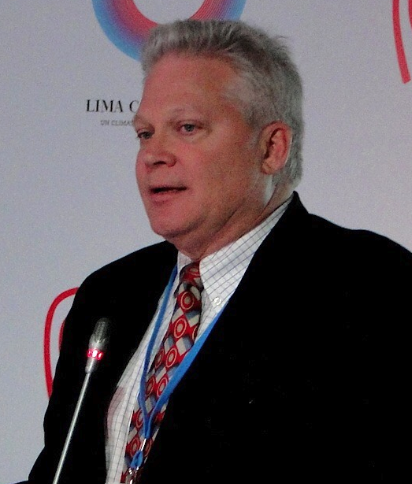 Andrew Mangan, executive director of the U.S. Business Council for Sustainable Development.
“The short story is they were successful,” Mangan told GreenBiz of the cross-industry material swapping that since has become a cultural touchstone in the realm of zero-waste business practices.

The organization now operates an online system for listing and requesting materials useful for businesses, most of which usually either would be discarded or purchased new. USBCSD then helps match participating organizations, hopefully driving down costs for all involved and inching the city closer to its 2040 zero-waste goal enacted in 2009.

New local opportunities for recycling, some befitting of the Austin's quirky reputation, are already emerging.

“We’ve got a lot of spent brewery grains that we’re trying to find a use for," said USBCSD's Daniel Kietzer, who has taken the lead on the Austin project.

512 Brewing Company is one of about 30 companies and organizations that have signed up for the marketplace since it first launched in August, among them big names such as General Motors, 3M and W Hotels.

Beer byproducts have been shipped in other instances to farmers in need of cattle grain, but Kietzer doesn't like the fact that cows actually produce more methane on a grain diet than a grass diet. So he's seeking local alternatives.

"Recently we’ve been talking to a guy who operates a cricket farm just outside of Austin," Kietzer said. "He’s growing crickets for human consumption — really innovative stuff — but we’re thinking we can use some of this brewery waste as a cricket substrate, or cricket feed."

Putting a price on trash

From Mexico to Southeast Asia to Detroit, Austin is far from the only market interested in catalyzing large-scale industrial recycling.

The jargon around business material reuse has changed over the years, from "industrial ecology" to "byproduct synergy" to the particularly wonky "industrial symbiosis."

More recently, however, trendy concepts related to the circular economy or closed-loop models have taken hold, thanks in part to branding efforts that appeal to increased consumer interest in supply chains and impacts on local economies — concepts that the Austin Materials Marketplace hopes to use to drive participation: 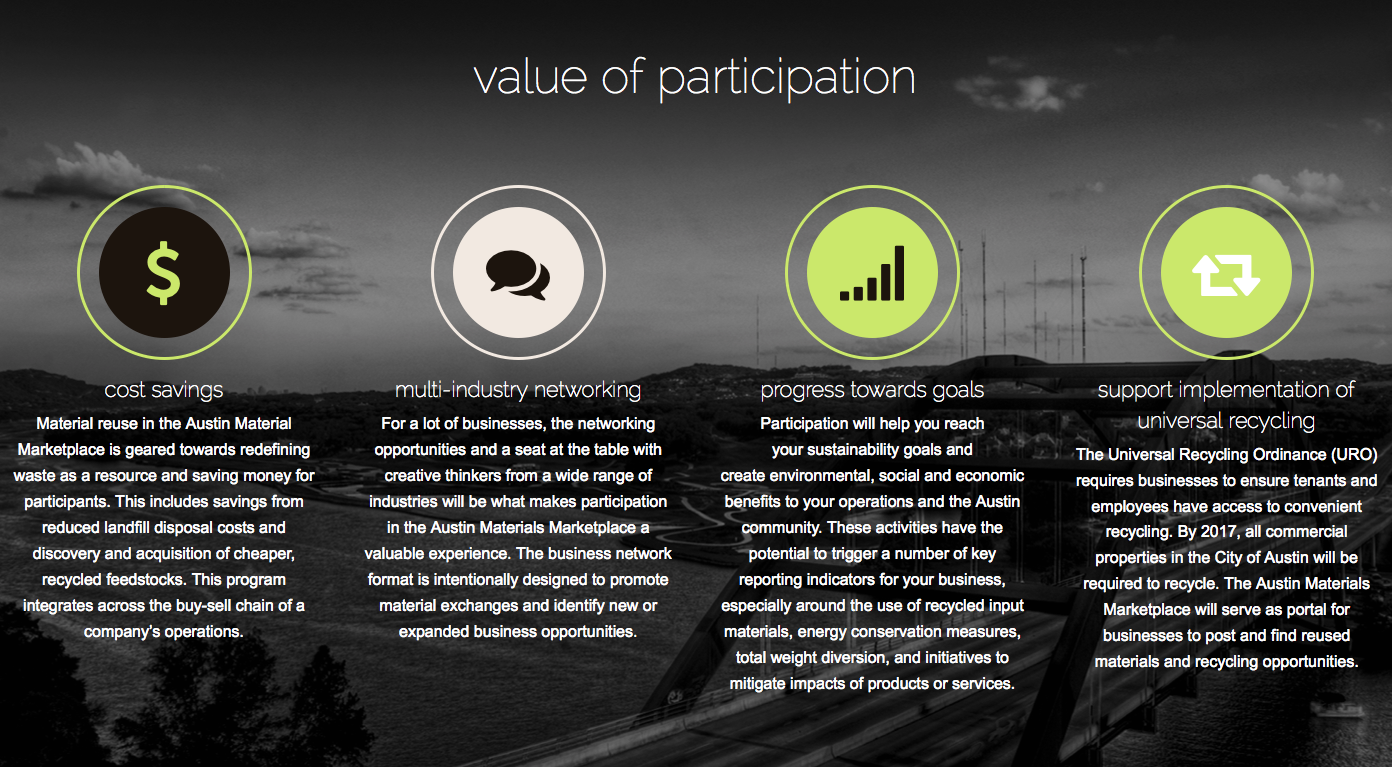 While that rationale so far has attracted more than two dozen participating organizations, the question moving forward is how the operation will scale.

Part of that is building critical mass among business participants, which is when financial imperatives might be helpful as a selling point for recycling.

"More and more companies are buying into the concept of efficiency and zero landfill," Mangan said, namechecking companies such as General Motors and Nike that publicly have stated achievement or a goal of reaching $1 billion in savings linked to material reuse.

There is also the possibility of turning a profit on materials sold to other businesses. Mangan cites an example of General Motors looking to sell build-up from a protective sealant that is sprayed on the bottom of cars to help minimize damage from rocks or road debris. The substance is also of interest to plumbing manufacturer Kohler, which might be able to use it to seal sinks or other products.

To illuminate those types of potential linkages for other companies, Mangan is intrigued by technologies that makes it easier to highlight opportuinities for cross-industry materials exchanges, like online marketplaces or Google hangouts focused on the topic.

“If you can get companies in a region to see one another’s material flows in an efficient, easy way, they would begin to see the opportunities and connect the dots,” Mangan said. 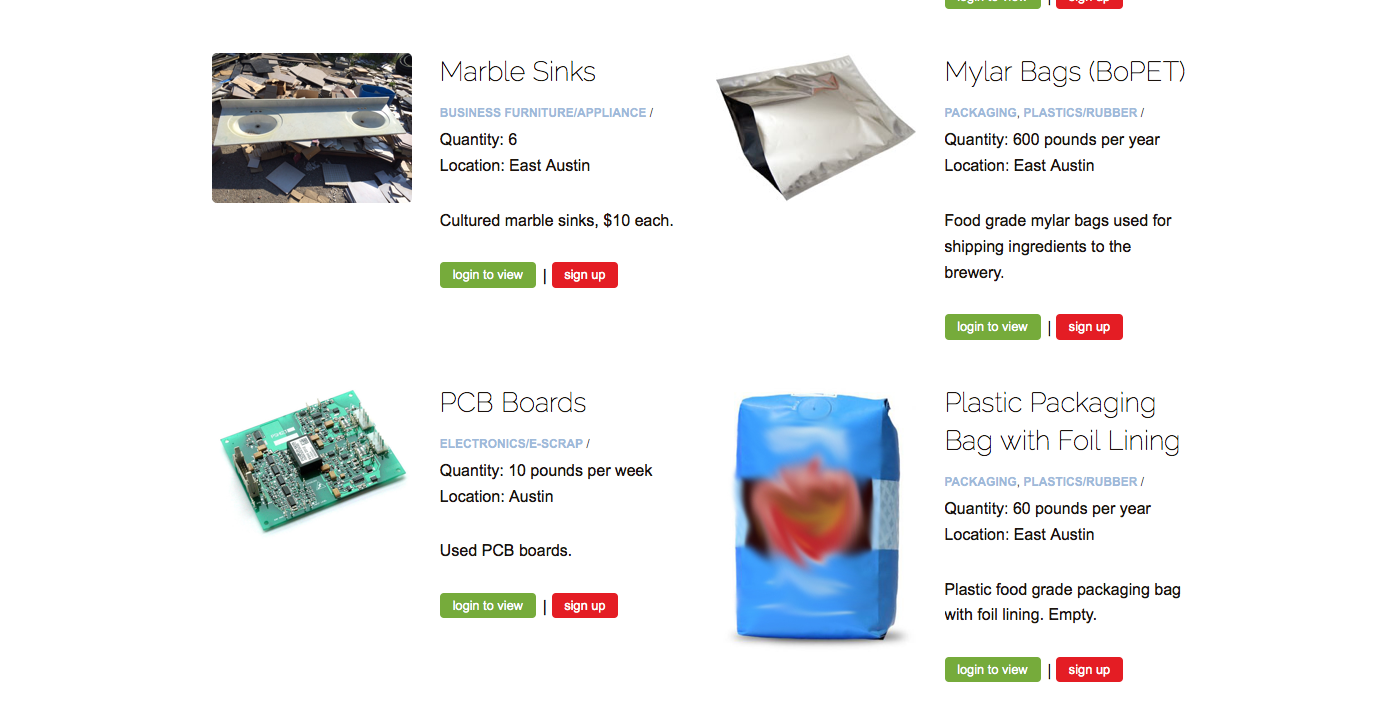 A glimpse of items up for grabs on the Austin Materials Marketplace. If participating businesses don't see an item they need, they can list it on a section of the organization's website that catalogs in-demand materials.

As the city of Austin's "recycling economic development liason," Natalie Betts has a unique job to do: Turning trash into an economic positive.

Though some of the city's most-hyped recent business activity has revolved around the growth of tech tenants such as Apple Inc., Betts and her colleagues in economic development are hoping that the city's goal of reaching 90 percent diversion from landfills by 2040 will contribute to more sustainable growth on multiple fronts.

On top of the environmental implications of increased recycling rates and reduced city costs for trash pickup or landfill contributions, Austin is eying material processing as a way to provide job opportunities for workers lacking the degrees or technical training required for white collar tech jobs.

"Our economic development team is really focused on trying to bring in middle-wage jobs and workers,” she said.

One way the city hopes to merge its sustainability and workforce goals is the Austin [re]Manufacturing Hub currently being developed — a 100-acre, city-owned former landfill that in 2016 is expected to start leasing to tenants who fit into the vision of cultivating “a hub for processors and recycling manufacturers.”

The hope is that attracting business tenants who in some way can help cut down on waste or contribute to recycling efforts — a glass processor, for instance — will add jobs, bolster programs such as the business materials marketplace and cut down on the carbon footprint for transporting recyclables long distances.

In the interim, the city seeks to recruit participants in the Austin Materials Marketplace and invest in marketing initiatives such as "Shop Zero Waste," which promotes businesses selling reused goods or repairing existing products as an alternative to buying new things that might not be necessary.

One big universal concern for governments, much like businesses, is how such activities will be financed. The materials marketplace is one example of a program where some costs were offset by savings on garbage pick-up trips and landfill expenditures.

"I think it’s a whole kind of culture and mindshift," she said. "The stuff that you throw away has value. It also has costs when you throw it away."

First Steps for the U.S. Business Council for Sustainable Development