Why the Government Needs to Play a Role in Innovation

These are the prepared remarks from David Sandalow, Assistant Secretary for Policy & International Affairs at the U.S. Department of Energy, presented at Yale University on October 21, 2011.

My topic today is government's role in innovation. Let's start with three stories.

In 1965, a U.S. government employee named Bob Taylor had an idea about how computers could communicate. He took the idea to his boss Charles Herzfeld, head of the Defense Advanced Research Projects Agency (DARPA), who invested government funds in exploring it. That led to the ARPAnet and, in turn, to the Internet, changing the world.

In 1980, two U.S. government employees named Leo Schrider and Robert Wise published a paper in which they described work by the Department of Energy to extract natural gas from shale rock. Noting "declining gas reserves" in the U.S., the two argued that U.S. shale formations "contain a vast, essentially unexplored volume of natural gas" and highlighted a "DOE-industry partnership ... that will produce the technology required to stimulate commercial development" of shale gas.

Last year, shale provided roughly 23 percent of U.S. natural gas -- a figure that's expected to grow. A leading U.S. natural gas producer recently said: "Early DOE R&D in ... gas shales ... helped to catalyze the development of technologies that we are applying today. The Department of Energy was there with research funding when no one else was interested and today we are all reaping the benefits."

In 1998, two Stanford graduate students named Sergey Brin and Larry Page published a paper that begins: "In this paper, we present Google, a prototype of a large-scale search engine ... " The paper says that Google is "designed to crawl and index the Web efficiently and produce much more satisfying search results than existing systems."

The two students succeeded: yesterday there were more than a billion searches on the Google search engine. At page 16 of their paper, Brin and Page write that their research was "supported by the National Science Foundation," with funding "also provided by DARPA and NASA."

So the Internet, shale gas technologies and Google search engine all had their origins in research funded by the U.S. government. Are these isolated examples? Hardly. Among the other innovations that grew directly from U.S. government funding are GPS devices, DNA mapping and inexpensive mass data storage.

Today the U.S. government continues to invest in innovation. Among the most promising programs is the Advanced Research Projects Agency -- Energy (ARPA-E), established under the America COMPETES Act of 2007. In the words of ARPA-E Director Arun Majumdar, the program helps "the nation's pioneers and entrepreneurs to innovate breakthrough technologies that do not exist yet today -- but if they did, would make today's technologies obsolete and create large commercial markets."

Among the projects funded by ARPA-E are those to convert carbon dioxide into liquid fuels, create a new generation of rechargeable battery technologies and develop substitutes for rare earth metals. As Dr. Majumdar has said, "[t]he portfolio of ideas that ARPA-E funds are too risky for the private sector to invest in at this time. However, if one of the ARPA-E ideas is shown to be practical, it could indeed change the world."

Other Department of Energy investments in innovation include our 46 Energy Frontier Research Centers, a research hub for creating fuels from sunlight and much more.

Standing back a bit -- today we are in the midst of a national debate on the role of government. The debate reprises others since the birth of our nation. James Madison and Alexander Hamilton wrote eloquently about role of government in the Federalist Papers.

Thomas Jefferson and Alexander Hamilton then debated the topic vigorously as members of President George Washington's Cabinet. In the early part of the 20th century, social legislation was struck down by a Supreme Court that insisted the U.S. government had no right to dictate the length of a work week or regulate safety of working conditions. Social Security and Medicare were opposed by those who believed they exceed the proper role of our federal government.

Today I'd like to leave you with one small but important point related to this debate: Governments play an important role in innovation. As we debate the role of government in many domains, as we assess priorities in shaping public budgets, let us not forget the central role governments play in encouraging, supporting and promoting innovation in many fields.

Why does this matter? In part because a substantial body of economic literature demonstrates that innovation is correlated with economic growth. Indeed for his work on this topic, Robert Solow won the Nobel Prize. Solow's work suggests that innovation is more important to GDP growth than capital accumulation or increases in the labor market.

Why is government important to innovation? For at least five reasons:

First and most basic -- because government protects intellectual property, with patents and other tools. That protection helps ensure that innovators benefit from their hard work and creativity, inducing more innovation. In the United States, this role for government is deeply embedded in our Constitutional scheme. Article 1, Section 8 of the U.S Constitution provides:

The Congress shall have power ... To promote the progress of science and useful arts, by securing for limited times to authors and inventors the exclusive right to their respective writings and discoveries

In the academic literature on innovation, the number of patents issued in a country is often used as a proxy for the rate of innovation. At this most basic level, governments play a central role in innovation.

As Prof. Henry Chesbrough documents in his book Open Innovation, the big corporate research labs of decades past have given way to more distributed approaches to innovation. That gets many technologies to market faster, but at the expense of fundamental research. Without government support for such research, the seed corn for future generations would be at risk.

Primary and secondary education is a vital precursor to much innovation. That's a job for governments everywhere. And universities play a central role, with training of promising young innovators often made possible by government funding.

Fifth -- because government policies and standards can lay a strong foundation for innovation. Last century, the U.S. benefitted from government policies requiring near- universal access to electricity and telephone services, laying the groundwork for a vibrant consumer electronics industry.

This century, Finland and Korea (among others) are benefitting from government policies to promote broadband access, helping position each country for global leadership in a vast global market. New technologies often require standards that allow them to operate within larger systems. The NTSC television broadcast standard and 110V AC current, for example, each helped market actors coordinate, encouraging innovation.

Or consider Israel, which has a teeming innovation culture in which the Israeli government plays a central role, providing the foundation for startups that commercialize civilian uses of military technologies in materials, semiconductors, medical devices and communications.

Before closing, let me address one related topic. During the past month in Washington, D.C., lots of attention has been paid to a DOE program designed in part to promote innovation -- a loan guarantee program established in the Energy Policy Act of 2005 to help steer private capital toward clean energy technologies. Much of this attention is due to a single company that received a loan guarantee but later went bankrupt.

1. All loan programs involve risk. According to the Financial Dictionary: "Banks assume that a certain percentage of loans will default or become slow-paying." That's why banks have loan loss reserves.

2. Loans for innovative technologies involve extra risk. Many innovations are successful. Some change the world. But innovation is never a sure thing.

4. The DOE loan program that has received the most attention in the past month was signed into law by President George W. Bush in 2005, with broad bipartisan support. During the past several years, many Members of Congress from both parties have urged DOE to issue loan guarantees for specific companies under that program. A frequent theme -- from Members of Congress of both parties and others -- has been that DOE should move more quickly in doing so.

5. Other countries provide low-cost capital for innovative energy technologies. The most significant player is China, which last year, alone, provided more than $30 billion in credit to the country's largest solar manufacturers through the government-controlled China Development Bank. Germany and Canada, for example, operate government-backed clean energy lending programs. And, in the last several months, the UK, Australia, and India, have announced their intent to do the same. These programs lower the cost of capital for projects utilizing innovative energy technologies, so they will be more competitive and attractive to private investors.

Any failed loan should be reviewed. All government programs should regularly be reviewed as well. But as we undertake those reviews, let's remember that loan programs involve risk. Let's remember that Congress anticipated that DOE's loan programs for innovative technologies would involve risk and appropriated funds to help cover expected losses. And let's stay focused on our objectives: promoting innovation, creating jobs, building a better future for our children and grandchildren.

The question facing Washington decision makers is not whether government should play a role in promoting clean energy innovation or leave this to the "free market." Governments around the world are already central players in the clean energy industry and will continue to be so.

The question is whether the people of the United States -- through their government -- will help U.S. companies compete in the growing global market for clean energy. As we move forward, we should incorporate lessons learned, but not lose our resolve in this important mission.

Today we benefit from the creativity, dedication and resolve of generations past. From the Internet, to shale gas technologies, to the Google search engine and much more, U.S. government support for innovation has helped shape and improve the world. In the years ahead, it can and must do the same. 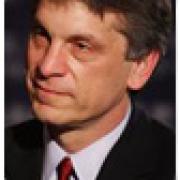 See all by David Sandalow