It’s one thing to read about huge plastic gyres in the middle of the Pacific. It’s another thing to stare the actual plastic in the face.

A container of plastic garbage pulled into Stockholm a couple of weeks ago. Then the garbage was dumped onto the floor of the National Museum of Science and Technology, in a big dusty pile. On purpose.

And a global crowdfunding campaign helped pay for it.

Before I tell you how we accomplished that, and why, let me quickly add that garbage was not the only thing in that container. There were also display cases, and a collection of nicer-looking everyday plastic objects — toys, lamps, bottles of face cream, even clothing — that fall into the category "not yet garbage," because they are technically still in use. Also, the physical container had been preceded by a massive "digital container" of texts, infographic posters and videos. All of these things are assembled to make up the 400-square-meter traveling exhibition called "Out to Sea."

The texts and visuals are arresting. But in "Out to Sea" — also known as the Plastic Garbage Project and created by the Museum für Gestaltung Zürich (Gestaltung is German for design) — the garbage is the main attraction. 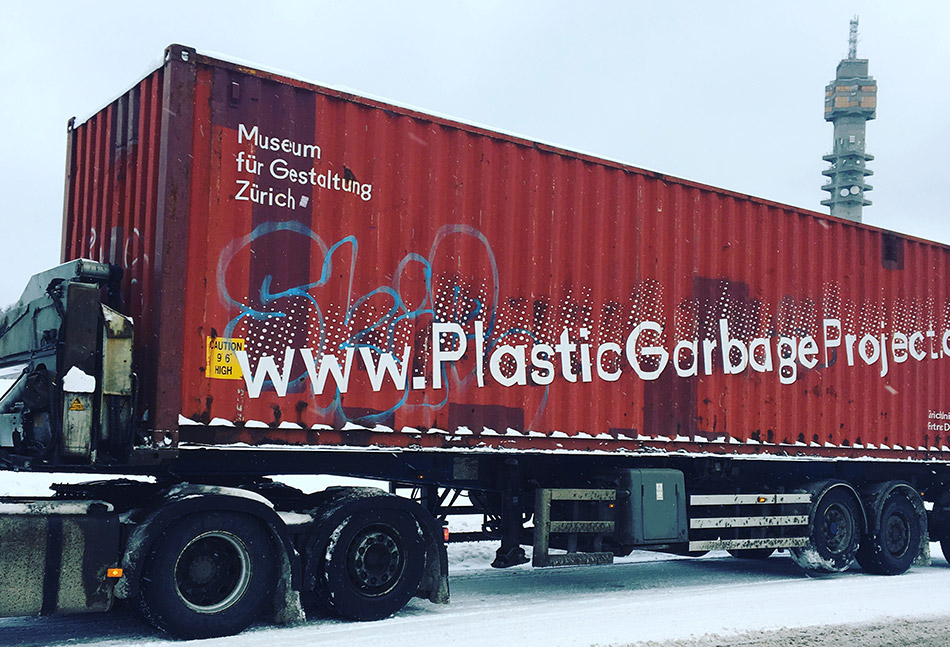 Ranging from countless tiny plastic chips smaller than your little fingernail, up to the large, crumpled remains of a pink two-seat pedal-boat, every piece of garbage in "Out to Sea" has come back from the sea to haunt us. It was all gathered by volunteer trash-collectors along island beaches around the world — and turned into a museum exhibition. The purpose is to raise awareness, build understanding and generate action on one of the most urgent environmental problems of our time.

All that sea-weathered plastic garbage is a bit shocking to look at, which is exactly the point.

All that sea-weathered plastic garbage is a bit shocking to look at, which is exactly the point. It’s one thing to read about huge plastic gyres in the middle of the Pacific, or watch videos on the web showing the plastic bits that fill the stomachs of seals and seabirds (and kill them). It’s another thing to stare the actual plastic — shampoo bottles, bottle caps, party balloons, laundry baskets, fishing gear; it all persists for decades or even centuries — in the face.

How I got into the garbage crowdfunding business

I am a trash-collector myself. Walking down a beach or around a lake, I feel compelled to clean. That’s why I was happy to meet with my friend Stina Axelsson and her colleague Gunilla Hedén about one year ago. Together, they have decades of art and exhibition experience behind them, much of it focused on water issues. They asked me to help in bringing Out to Sea to Stockholm.

I thought about it for 30 seconds, and said yes. But I had no idea what I was getting into.

So let’s skip over the months of effort to find a museum large enough and willing enough to mount this exhibition — until "Tekniska" (the aforementioned National Museum of Science and Technology) bravely said yes. Let’s pass over months of failed attempts to find corporate sponsors to pay for it: We approached more than 50 Swedish companies, including all the famous ones you can think of, and they all said no.

We approached more than 50 Swedish companies, including all the famous ones you can think of, and they all said no.

(Side note: I published a long Facebook post complaining about the unwillingness of any major Swedish business — supposedly world leaders in sustainability — to provide even a symbolic sum of money to support our initiative. The wave of sympathy and support I received on social media helped convince me that crowdfunding might work in this case.)

Let’s pause in a nice meeting room, at the end of January, overlooking some tour boats in Stockholm harbor. The mood is glum. Stina, Gunilla, myself and our friendly advisor Merci Olsson are drinking coffee and thinking about the fact that we have 12 days left to find the money we need if we are to keep our promise to Tekniska to deliver a fully funded exhibition.

"You mean, crowdfunding?" I said, incredulously, "for an exhibit on plastic garbage?"

How to crowdfund from scratch on short notice

In fact, there were several reasons why not. Crowdfunding is usually regulated by established digital businesses such as Kickstarter and Indiegogo. A good campaign, they tell you, takes months of preparation.

But we had no time to navigate these established crowdfunding platforms, with their rules and procedures, the need to make a fancy video and all that. We had 12 days to set up, launch and raise about $35,000. It seemed impossible, but we did it.

Here’s the recipe we used for home-made, "lightning challenge" crowdfunding. We assembled the following ingredients:

Those were the technical essentials. However, the two most important "ingredients" were a good story and a receptive audience — friends, family, colleagues, clients, readers of my books and a lot of very nice strangers as well.

Our story had three key components:

The answer to the last question proved to be yes. People stepped up, in a surprising way. After 10 days of incessant tweeting, posting and emailing, we crossed the goal line on Jan. 30, with hours to spare. What a relief it was to write to Tekniska — which had watched both our unfolding dilemma, with zero corporate sponsorship success, and our earnest effort to make good on our commitment via crowdfunding, with great patience — to tell them, "We made it; the exhibition is on."

Now, there were a few "tricks" to our crowdfunding success, which I will now reveal to you. 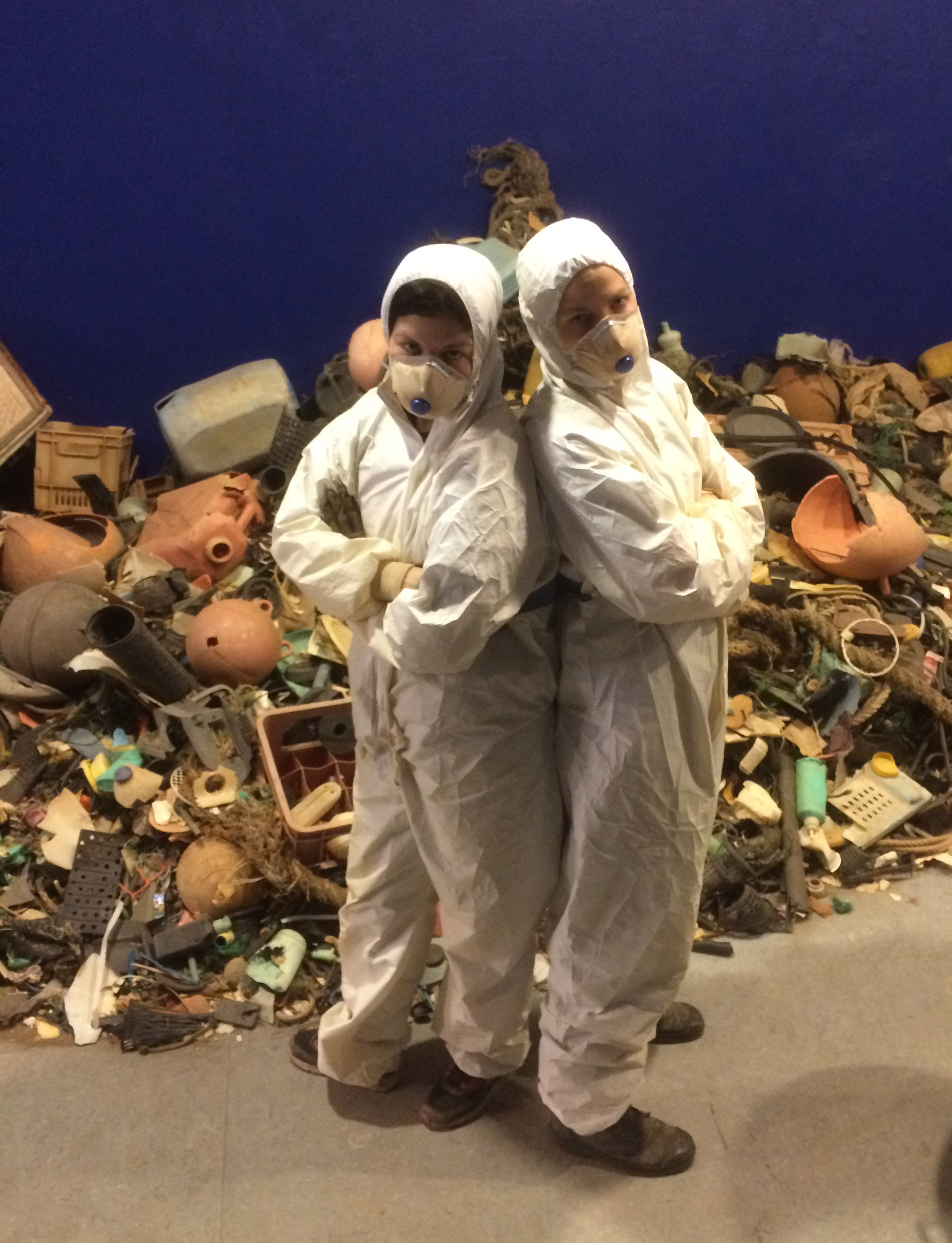 The first is this: we did not raise all the money from individuals. In fact, less than half the total came from individuals in classic, small-donation fashion. But the momentum created by crowdfunding — we called it a mixed "crowdfunding and sponsorship campaign," and we reported the daily totals — created a powerful signal that we were serious and committed.

This signal helped us finalize and secure a large sponsorship contribution from a Swedish government agency, in the middle of our campaign. We then used that good news to inspire more crowdfunders, and so on. The donation totals kept jumping up, and people felt more inspired to join.

Second, several donors made multiple donations. This was important because sometimes these were sizeable amounts ($1,000 and up). Lesson: never assume that your first-time contributor is finished. She or he might be happy to invest a bit more when they see that you are succeeding in your quest but need a little more help.

And finally, I kept one major sponsor in reserve, who was ready to make a sizeable donation at the very end and push the campaign over the goal line. That’s common practice in crowdfunding, and in this case, that sponsor was me.

I kept one major sponsor in reserve, who was ready to make a sizeable donation at the very end and push the campaign over the goal line.

My business is tiny; we don’t have a "budget" for sponsoring things like this. But I was fully committed, and I had given my word to Tekniska that we would find the money. Fortunately, the donations were so generous that I did not have to stretch to the very outer limits of financial possibility — but I still put in "major sponsor" levels of funding (which I financed by cutting back on other costs).

It’s a form of walking your talk. If you don’t believe in the value of the project enough to invest in it, who else will?

That’s my story. If you come to Stockholm, go see "Out to Sea" (through June 30). If you can’t come physically, then take a mental (or virtual) trip through the exhibition. Consider how the plastic garbage filling our seas is both a very real problem all by itself, but also a symbol of other urgent problems that are less visible: global warming, acidification, toxic chemicals, overfishing, undersea mining — it’s a long and worrying list. The sea, 70 percent of the planet, needs our serious attention.

So please use this global moment of attention, capped by this first U.N. summit on the oceans, to renew your own sense of commitment to help create a truly circular economy, indeed a fully sustainable society. We can clean up this marine mess, starting with transforming things on land — perhaps not completely in our lifetimes, but certainly in this century. But we must start doing more, now, together.

Why I am a stubborn optimist

Harder but not impossible: COVID-19 and the Sustainable Development Goals

See all by Alan AtKisson