Why it’s time for congestion pricing in New York City

Congestion pricing in New York City was first discussed in 2007, when it was introduced by Mayor Michael Bloomberg in PlanNYC (PDF) as a solution to the city’s traffic and congestion issues, as well as a source of revenue for transit improvements. While the proposal has faced myriad challenges in the past decade — such as suitable tariffs, equity concerns and political will — the uptake of electric vehicles (EVs) and urgency of MTA subway improvements could serve as decisive factors for successfully implementing congestion pricing in NYC.

What is congestion pricing?

Congestion pricing is a fee imposed on vehicles that enter a designated area, typically one of high activity such as a central business district.

Check out this short video about the history of congestion pricing, how it has been deployed in other cities and opportunities for New York.

There have been several iterations of the congestion pricing proposal released for NYC, most notably in 2007, 2015 and 2018. The most recent set of proposals, led by a panel appointed by Gov. Andrew Cuomo, is detailed in Fix NYC (PDF). The key recommendation is to levy a $11.52 toll on all private cars entering the central business district (defined as Manhattan below 60th Street), a $25.34 toll on every truck and a lower per-ride surcharge on taxis and ride-sharing vehicles. With multiple scenarios described in the report, the transit system could generate over $1.1 billion annually (without including revenues from for-hire vehicles); weekday traffic would move about 9 percent faster; and a congestion reduction of about 14 percent means that New Yorkers would spend much less time every day getting where they need to go. 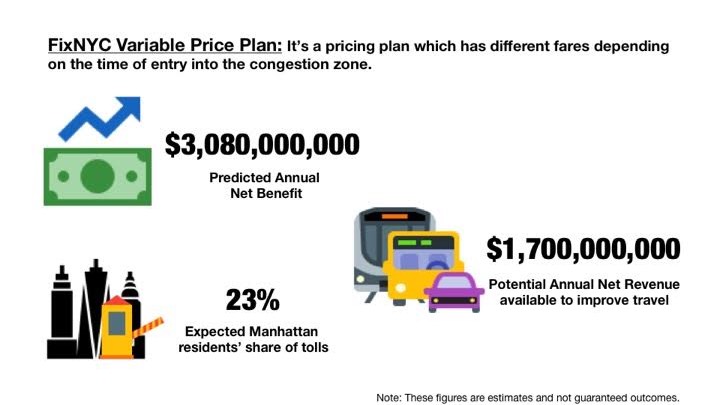 Despite forecasted benefits, NYC’s congestion pricing proposal faces other challenges, including return on investment and the effects of tolls on outer-borough and lower-income residents.

The first is a question of how long it will take for congestion pricing to produce reduced traffic. The Fix NYC panel used Charles Komanoff’s Balanced Transportation Analyzer, an interactive Excel-based tool that forecasts vehicular traffic reduction, factoring in selected variables and externalities. The tool offers a comprehensive insight into traffic pricing and helps forecast volume reductions. Using the Analyzer, Fix NYC found traffic would fall about 10 percent in the short term. Additionally, $1.7 billion would be raised each year in tolls, factoring in higher farebox revenues.

A second concern is that congestion pricing unfairly burdens outer-borough residents, many of them low-income, who have poor access to public transit and therefore have no option but to drive. However, under the Fix NYC plan, Manhattan residents would bear about a third of the cost, with the rest almost evenly split among the other four boroughs and the suburbs. Fewer than 5,000 low-income outer-borough residents (automatic download) commute to the central business district by car (compared to the 190,000 who use the subway), and the city could subsidize their costs.

Further questions about implementation will continue to emerge as the city considers deploying congestion pricing, but some answers can be found by looking to other cities that successfully have implemented a pricing model to reduce congestion.

Other cities with congestion pricing

Tri-State Transportation Campaign (TSTC), a non-profit policy advocacy organization dedicated to mobility, accessibility and livability in New York, New Jersey and Connecticut, has conducted a thorough analysis comparing congestion pricing in different cities. More details of these programs can be found in this report (PDF). Here are some key highlights from London, Stockholm and Singapore.

London’s congestion pricing system, which launched in 2003, covers an eight-square-mile area in London’s inner city. Vehicles pay a flat daily fee of approximately $15. The fee is payable from 7 a.m. to 6 p.m. weekdays. It is not charged on weekends, certain holidays or between Christmas and New Year’s Day, and never at night (that is, from 6 p.m. to 7a.m.). 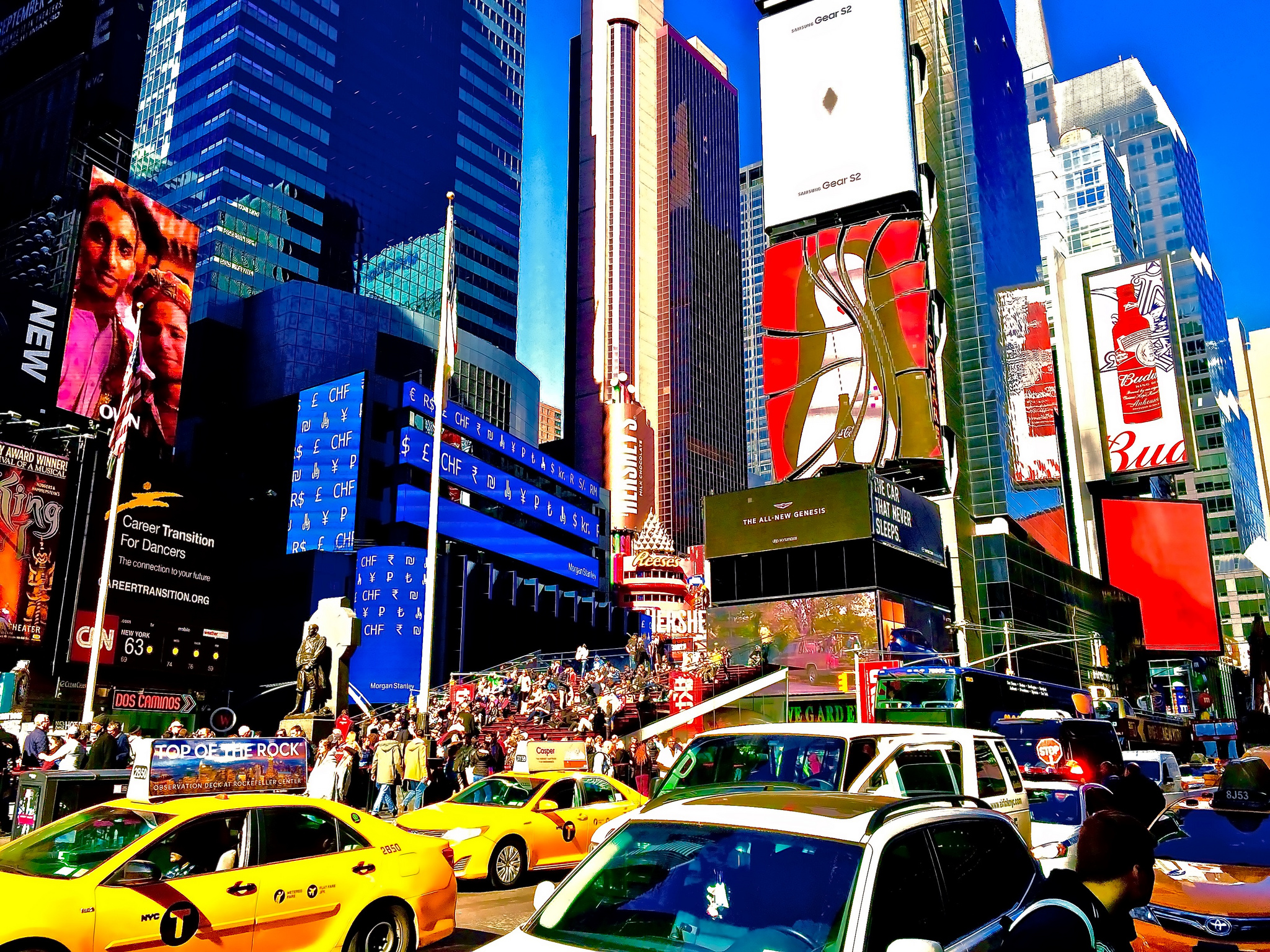 The program required an initial investment of $214 million. Its annual operating cost is $172 million while it generates annual revenue of $182 million. According to a case study published by C40 Cities, the pricing system has led to a 20 percent reduction in four-wheeled traffic within the charging zone during charging hours, cutting an estimated 40 million to 50 million liters of vehicle fuel consumption inside the zone and a total 100,000 tons CO2 emissions annually across London.

Stockholm’s system, which began in 2007, provides for variable pricing based on the time of day. The highest charge is 35 krona, or about $4. Charges are incurred only from 6:30 a.m. to 6:30 p.m. weekdays. There are no charges on public holidays or on the day before holidays, and no charges at all during July. The program in Stockholm required an initial investment of $236.7 million. Its annual operating cost is $11.8 million but it generates annual revenue of $155 million. A comprehensive cost-benefit analysis of Stockholm's system (PDF) can help understand the measured and assumed benefits for citizens.

Singapore adopted "electronic road pricing" (ERP) in 1998. Now drivers must purchase an in-vehicle unit (at a cost of about $100) for their dashboard, which has a smart card with fare stored on it. Fees are collected from the smart card at more than 50 places in and surrounding Singapore’s central business district from 7 a.m. to 8 p.m, Monday through Saturday. Rates differ (ranging from free to $3) depending on the road, the time and the amount of traffic. Fees are not collected Sundays, holidays or after 1 p.m. the day before a holiday.

Overall weekday traffic entering the implemented zone in Singapore has dropped by 24 percent.

Overall weekday traffic entering the implemented zone in Singapore has dropped by 24 percent, according to this publication by the U.S. Department of Transportation. The ERP system required an initial investment of $110 million. Its annual operating cost is $18.5 million while it generates annual revenue of $100 million.

Most important, the TSTC report found significant benefits to the cities and their residents from their congestion pricing systems. Congestion pricing has encouraged more efficient travel decisions, sped up traffic flow, improved journey time reliability and — of special importance for New York — raised annual revenue streams of over $100 million. Each city also employed auxiliary improvements complementary to congestion pricing that enabled alternate transit modes to handle the overflow from the roads.

Beyond these principles, other local decarbonization goals can help propel the congestion pricing proposal through the New York State Assembly.

New York City and state have improvement plans for increased EV use while improving the city’s public transportation. Addressing both will improve and support the outcomes of congestion pricing deployment.

NYC’s goal is to reach 20 percent of cars sold for use in the city to be electric by 2025, up from less than 1 percent of cars sold today. To reach this goal, a number of consumer incentives are offered, including a rebate for new car purchases. There is also an increased volume of investments in charging infrastructure across the city and state, thanks to tax credits for infrastructural installation. (More details of these measures can be read about in Advanced Energy Group’s Q4 Blog on Mobility and Transportation.) A congestion pricing rebate for EVs would be a valuable incentive for quicker EV uptake, helping the city and state realize their decarbonization goals.

Additionally, there is an urgent need for revenue generation for the MTA, according to a recent report (PDF) released by New York State Comptroller Thomas DiNapoli. The report states that the MTA’s debt service is expected to reach $3.3 billion by 2022; outstanding debt could reach a dizzying $42 billion. While the implementation of congestion pricing itself won’t solve MTA’s financial problems, it can help reduce this burden while generating capital for long term improvements.

Cuomo has referred to congestion pricing as "an idea whose time has come." It’s time for NYC to have a solution that generates dollars for transit investment while prioritizing other transit options over single-occupancy vehicles. Although the political hurdle remains daunting, the environmental, social and economic case for congestion pricing in NYC never has been more clear. 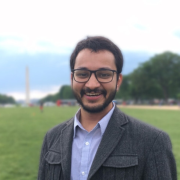 See all by Vishant Kothari