Why manufacturing will make or break the future of energy

From solar panels a decade ago to energy storage today, the history of clean tech is littered with capital-intensive concepts poised to radically alter the relationship between industrialized society and the environment.

But why do these widely heralded breakthroughs always seem to limp along so slowly when it comes to actually hitting the market? The dreaded "valley of death" between conception and commercialization is one increasingly recognized explanation, dooming novel technologies to relegation in never-ending pilot projects as follow-on investment lags.

For Mark Johnson, the Department of Energy's resident innovation expert, the real problem often boils down to production. That is, not just inventing a new energy-centric technologies, but making sure those new tools can be reliably made in a cost-effective manner. 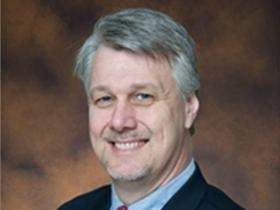 <p>Mark Johnson, director of the Advanced Manufacturing Office in the U.S. Department of Energy's Office of Energy Efficiency and Renewable Energy.</p>
"We can do a lot to invent new technologies relevant to energy," Johnson, director of the DOE's Advanced Manufacturing Office, told GreenBiz. "But where you get those real breakthrough adoption moments is when the technology drives to the point where it reaches cost parity because of manufacturing innovation."

The "maker" craze has gripped consumer imagination in the form of 3D-printed plastic trinkets. Meanwhile, government labs and corporate innovation clusters at automakers, electronics giants and all manner of other companies are focused on advanced manufacturing at scale.

It's a field that encompasses everything from additive manufacturing to high-tech materials to Internet of Things sensors to a range of robotics possibilities, with the latter poised to crack open a Pandora's box of labor automation anxiety.

Johnson's agency aims to help make sense of it all, particularly as the world grapples with fallout from fossil fuel-powered manufacturing and a shift toward renewable energy.

The Advanced Manufacturing Institute has embarked on a number of efforts aimed at not just inventing and patenting new technologies related to energy generation, grid integration and related areas, but also building better infrastructure for advanced manufacturing techniques that they hope will wring waste — and costs — out of the production process.

Those efforts include a network of 15 new U.S. "manufacturing innovation institutes" promised by President Barack Obama in his last State of the Union address. A separate Smart Manufacturing Institute based at the University of California, Los Angeles is one of

A separate Smart Manufacturing Institute based at the University of California, Los Angeles is one of multiple public-private efforts aimed at advancing nascent energy technologies with a potential manufacturing efficiency upside, such as applying Internet of Things connectivity and data analytics to factories.

The promise of advanced manufacturing doesn't stop with products explicitly associated with clean energy, though.

Where you get those real breakthrough adoption moments is when the technology drives to the point where it reaches cost parity because of manufacturing innovation.

That could mean finding ways to economically produce lighter-weight consumer vehicles, or, as the energy agency's new REMADE program hopes to do, encouraging more aggressive recycling or "circular economy" approaches to production.

Still, increasingly fragmented global supply chains complicate the production puzzle. It's not just businesses, but also their many suppliers wrestling with the financial and technical feasibility of major manufacturing upgrades.

“We don’t have vertically integrated companies any more," Johnson said. "Ford controlled everything from iron mines to dealerships they could get the value out of everything in that supply chain. Now they have tier 1, tier 2, tier 3 suppliers."

The challenge now is getting all those moving parts working together, particularly as the DOE and a range of consortia partners such as federal laboratories and universities blaze the trail on nascent clean technologies.

Moving the needle on manufacturing

Manufacturing is by no means a monolithic category.

From small-scale upcycled products to massive factories churning out cars, textiles or smartphones, the scope and environmental impact of manufacturing operations varies dramatically by scale and geography.

At a high level, however, federal data from recent years does show that the way we power production systems is beginning to change. As global energy intensity falls, the U.S. Energy Information Agency also documented a 17 percent decline in manufacturing energy consumption from 2002 to 2010, with the coal, oil and petrochemical industries remaining the biggest users in production. 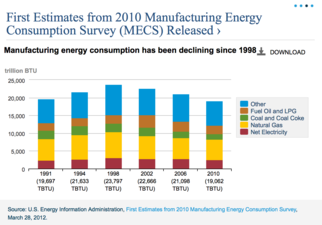 “If you look at the use of energy in the manufacturing sector, over half of that energy goes to just a limited set of energy-intensive industries," Johnson said.

Producing the ethylene that serves as the foundation of the myriad plastics used in different products is one of the most energy-intensive industrial processes, along with production of ammonia for use in fertilizer, he said. Pulp and paper and primary metals manufacturing are also both energy- and resource-intensive.

Advanced materials such as carbon fiber and graphene represent one field that could start changing the way a range of products are made — if it makes sense to make them in the first place.

"The challenge is that the cost is about three to four times higher than the cost of competing materials," Johnson said, noting that the process of making carbon fiber is both time- and capital-intensive.

Going in circles — in a good way

In addition to the emissions and ecological impacts that can result from heavy manufacturing, there's also the issue of waste to contend with.

"Up to 50 percent of the materials we produce wind up in a landfill within 12 months of their production," Johnson said. "The embodied energy — in other words, all the energy it took to make those things — is essentially being put into a landfill."

That's where he hopes some circular logic can come in handy.

Rather than trashing used products, their packaging and other manufacturing scraps, Johnson hopes to use them as "feedstocks" for new things — a core tenent of the circular economy push among sustainability advocates for production built on reuse rather than non-renewable virgin materials.

"Can you use those wasted materials, whether it’s at the end of life or used as some mid-stream product, and wind up actually using it again?" he said. "The limiting factors are cost and energy."

A range of companies are already experimenting in the space, although what's really a variation on recycling and what represents a truly circular model varies depending on who you ask.

Tech companies such as Apple are focused on cutting e-waste by investing in reverse logistics, in this case iPhone-dismantling robots, to break down — and ideally, to find and repurpose — electronics components. In an example from the world of weird materials, Ford is partnering with Jose Cuervo to evaluate ways to use agave left over from tequila production in bioplastic car parts.

While the possibilities are vast, Johnson said the breakthroughs for clean energy manufacturing ultimately will have to come from the supply chain.

"A lot of OEMs have sustainability programs, whether its automotive, aviation, textiles," he said. "What they need is a supply chain that can wind up applying those processes."

NRG, IDEO on 3 mega-forces that will shape the future of energy

4 myths about manufacturing in the fourth industrial revolution

What does energy productivity mean?