Why Method's co-founder wants you to drink your peas

Adam Lowry wants you to drink your peas. Not just any old peas, mind you, but peas processed into a protein-laden, plant-based milk alternative from his new startup Ripple Foods.

Lowry quietly left his previous venture Method Products last year, after a 15-year-run with the green cleaning products company he founded with his former San Francisco roommate. After spearheading the company’s expansion into a LEED Platinum manufacturing site in Chicago, Lowry was looking for a bigger challenge.

"I want to do as much good as I can from a career standpoint," he said.

That credo led Lowry to his Ripple co-founder and co-CEO, respected green chemist Neil Renninger. The two connected while researching various food technology startups emerging from the Silicon Valley venture scene. He was intrigued by two things: Evidence suggests that not only are Ripple’s products more nutritious than many other dairy alternatives but they are also kinder to the environment, at least in terms of water consumption.

"We are bringing something really unique to the market," he said.

I want to do as much good as I can from a career standpoint.

That’s a pretty bold statement, considering the huge impact Lowry already has made in raising visibility for products designed with the environment in mind. Method grew to well north of $100 million in revenue before selling out to Belgian company Ecover in September 2012.

Renninger may be less well known, but his credentials actually may be more impressive from a humanitarian point of view. He was the co-founder of biofuels company Amyris, where he led the team that developed an anti-malarial compound now used in almost 100 million treatments daily.

Lowry and Renninger raised $13.6 million in Series A venture funding from undisclosed investors to get off the ground. Plus, they already have found two major retailers willing to give Ripple’s product a try based on their past successes. Whole Foods will add Ripple’s first four products to its refrigerated aisles nationwide starting in early May. Target, meanwhile, plans to pick up Ripple’s plant-based dairy alternatives in July, according to Renninger.

"We have had a bunch of other retailers come to us asking for the product," he said.

What makes this peas pitch so pleasing

What’s piqued attention is the eyebrow-raising nutritional information touted by the two co-CEOs at every turn. There are 8 grams of protein in every serving of Ripple’s plant-based milk. That compares with 1 gram for milk alternatives made with almonds and none at all for products made with cashews or coconuts, according to the information that Ripple cites on its website.

The company doesn’t publish comparisons, but Ripple’s protein credentials are comparable to the protein content in either soy milk or 1-percent cow’s milk, as calculated by the Department of Agriculture. 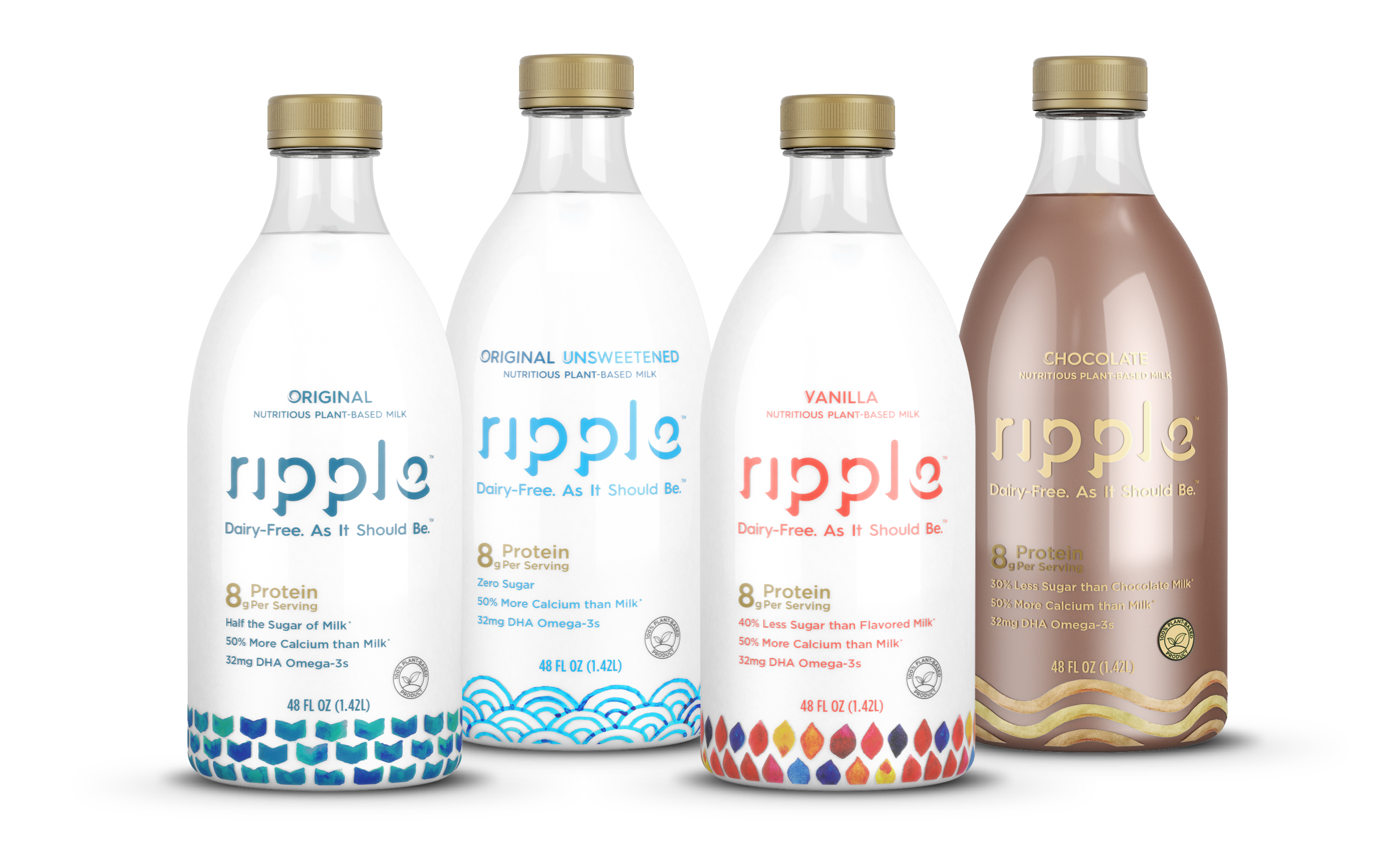 Renninger’s team tested hundreds of ways to separate fats and carbohydrate molecules from yellow peas to maximize Ripple’s protein content. (And yes, it has applied for patent based on this process.) About 25 percent of each Ripple serving is made up of the peas.

The other ingredients include sunflower oil, organic cane sugar (still half the sugar of dairy milk) and water. The process is basically the same as the one used to produce other types of milk, a factor that should help Ripple scale its manufacturing capacity relatively quickly, he said.

"The first step, separating out the protein, is where the innovation lies," Renninger said. "That takes a few hours, but our process was designed to keep the amount of novel equipment needed for the process to a minimum."

What’s piqued attention is the eyebrow-raising nutritional information: 8 grams of protein in every serving.

The initial base for Ripple’s operation is in Emeryville, California. The first product line — which comes in four flavors: original, unsweetened, vanilla and chocolate — uses peas sourced from France, although the intention moving forward is to buy from farmers in the Midwest and Canada, according to Lowry.

That will be important for building up Ripple’s environmental credentials, which the startup holds up as a major point of differentiation vis-à-vis dairy milk and alternatives made from cashews, almonds and coconuts.

"The impacts of our current food system are pretty clear and massive," Renninger said.

For example, growing peas requires 93 percent less water than dairy milk and 85 percent less than almonds. Specifically, it takes about 60 gallons to produce one glass of dairy milk versus a half-gallon for one glass of Ripple pea-derived milk, according to Ripple. It bases those figures on factors such as crop footprints.

Evidence suggests that not only are Ripple’s products more nutritious than many other dairy alternatives but they are also kinder to the environment.

Ripple called on Lowry’s extensive experience with recycled packaging at Method when designing the bottles for its first product line. Unlike other dairy alternatives, they are made entirely out of post-consumer recycled plastic designed to protect the milk for its 90-day shelf life.

Almond milk currently rates as the most popular dairy-free milk alternative in the United States, where it accounted for almost $895 million in sales during 2015. Soy milk was the next closest plant-based derivative, generating more than $297 million in revenue that year.