Why mobility tech could be $600 billion boon for cities

Ridesharing apps, autonomous vehicles, electric cars, bicycles. It's easy to feel your wheels are spinning when it comes to keeping up with the automakers, startups and cities racing to keep pace with a new wave of transportation technologies.

Now, however, consultants at McKinsey actually have put a number on how much "integrated mobility" stands to save cities money when it comes to pollution, safety and other transportation-related costs. Their prediction: That amount could swell up to $600 billion. That should help planners find new traction.

"These shifts could have profound economic and social effects," wrote the authors of the new report. "Because each city is unique, the transition to integrated mobility will also play out differently."

The new analysis, "The future(s) of mobility: How cities can benefit," focuses on 50 large cities that are home to a combined 500 million people.

Among the bigger takeaways is a roadmap of the factors most likely to directly determine how much a city stands to benefit from shared mobility services and technologies — characteristics such as population density, regulatory frameworks, the capacity of local energy systems for the transition to EVs, and public investment in roads and other transportation-related infrastructure.

Using these issues as the levers, the report models three potential scenarios.

In dense, developing cities, for example, the authors foresee significant cost savings that are most attributable to the potential for fewer serious traffic accidents. 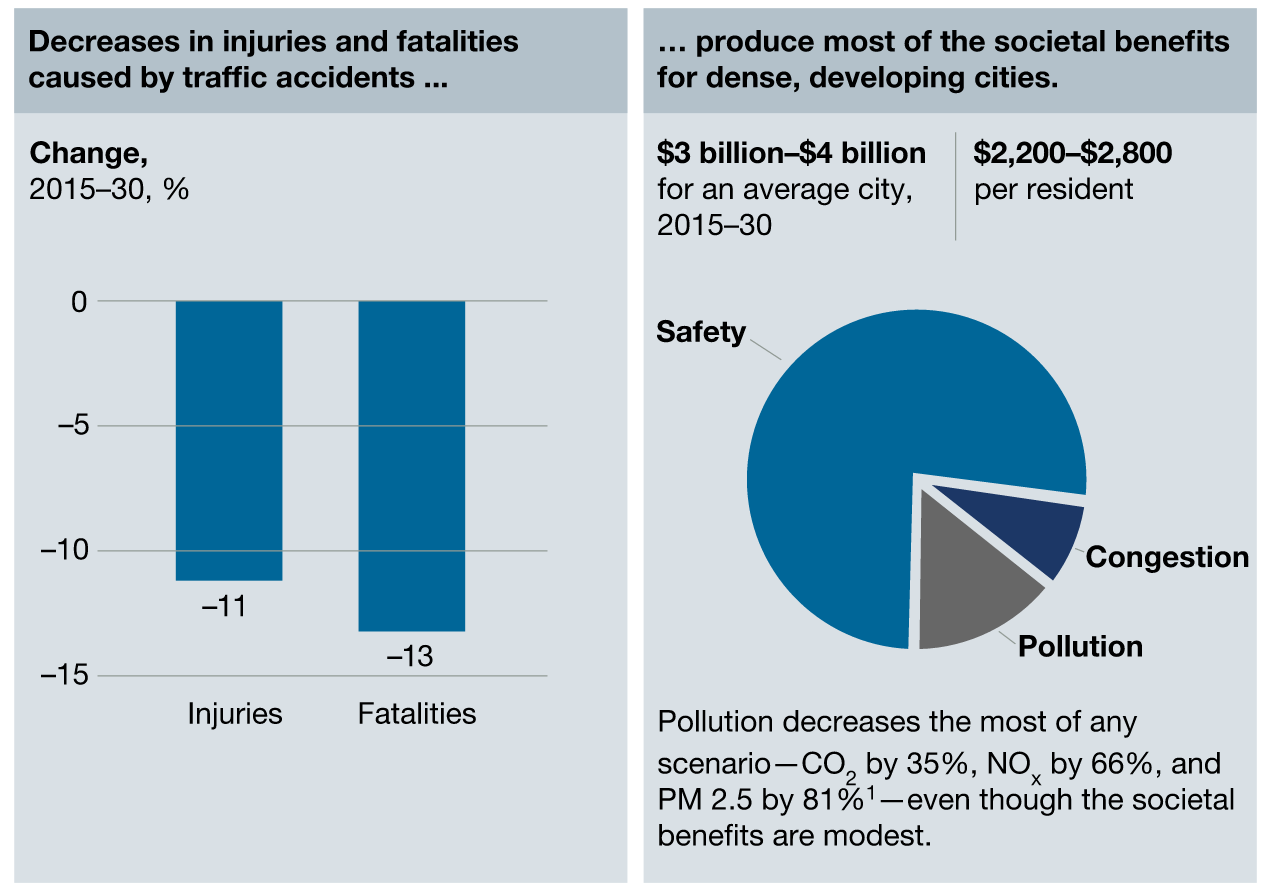 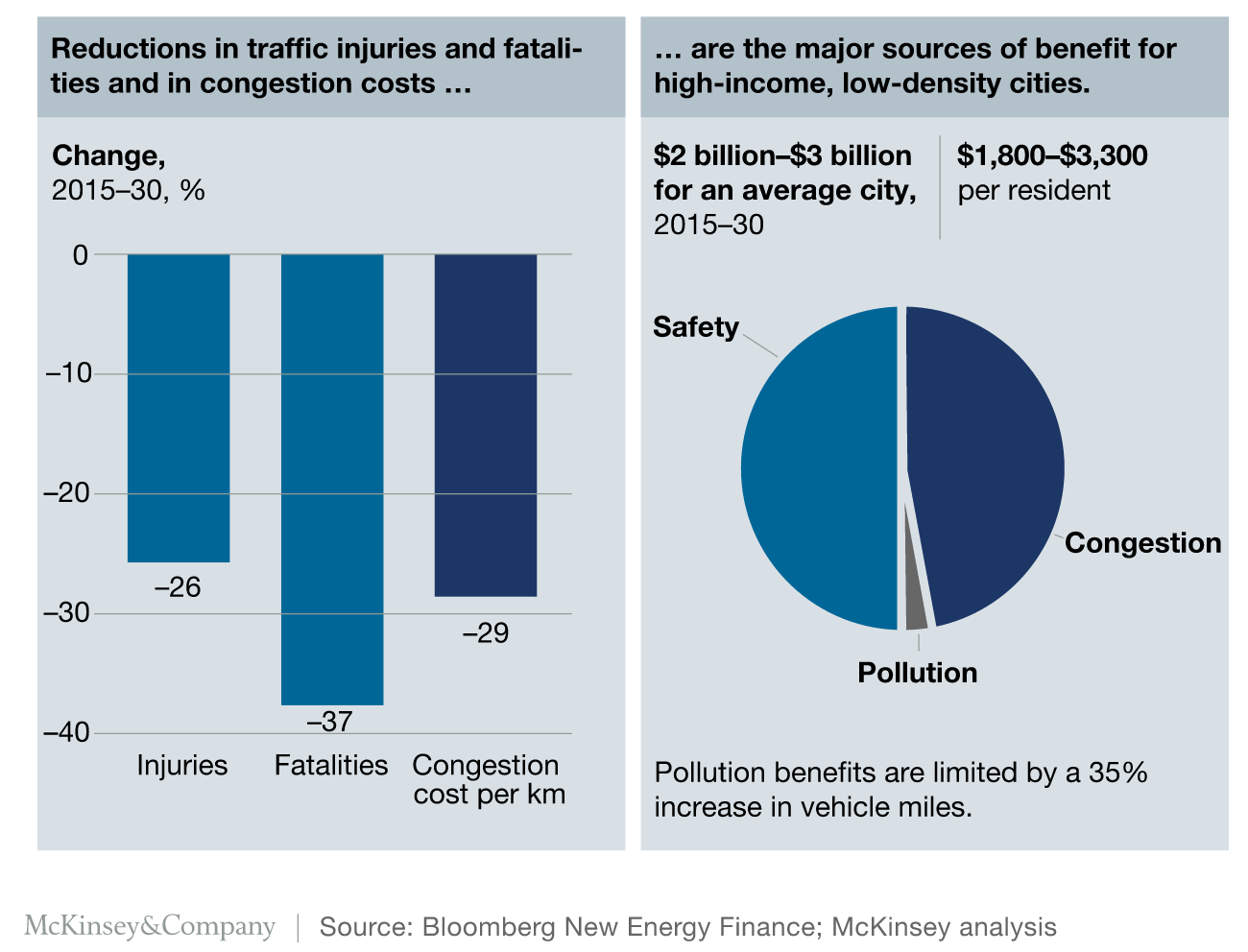 Finally, in dense and developed cities, cost savings related to less traffic look likely to be the most pronounced benefit of mobility technology investments. 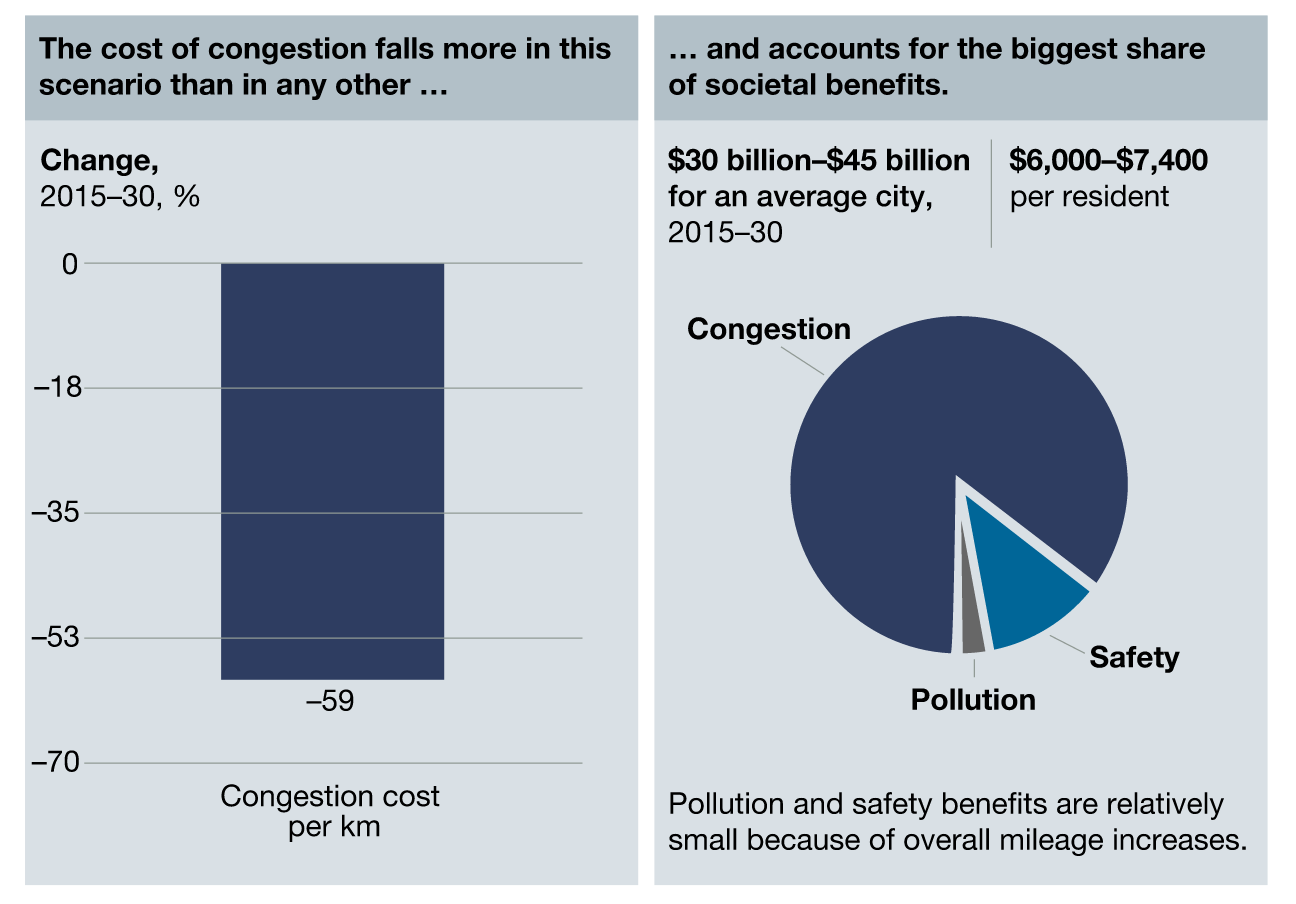 What exactly this all means for companies connected to the transportation industry likely will vary widely.

"The private sector will exert important influences, too, as companies adjust to new consumer behaviors," the report explained. "Utilities, for example, will need to manage possible increases in electricity demand. Automakers can expect the automotive revenue pool to grow and diversify as the mix of vehicles sold tilts toward electric and autonomous vehicles."

Despite the increased flexibility and potential to reduce single-driver trips with shared rides, personal cars used by Uber and Lyft drivers inherently don't have the capacity of public transit. In addition to the mass accessibility of transit systems, there are also environmental benefits to reducing congestion by moving larger groups of people with buses, trains or other public systems.

Of late, Lyft in particular has moved to experiment with larger on-demand shuttle buses and ratcheted up calls for cities to reconsider how public subsidies are allocated, making a case that governments in areas with limited transit could be better served by subsidizing shared rides.

2. More land for public use?

Much has been made of the potential to repurpose parking spaces and increase walkability in cities in the event of rapid uptake of self-driving cars.

Less certain, though, is how realistic this vision is. As McKinsey's analysts point out, views diverge on whether consumers are more likely to use autonomous vehicles as personal robo-assistants or more communal shared resources — a question that ultimately may determine how drastically the built environment will change as a result.

Who stands to gain financially from evolving transportation technology? Aside from venture capitalists bankrolling startups in the space, cities could move proactively to recoup decreased gasoline taxes with various dynamic pricing models, the report suggested.

"Extensive adoption of EVs could reduce revenues from fuel taxes by 20 to 65 percent unless taxation systems are reconfigured," the authors explained. "On the other hand, connectivity and the Internet of Things could be used to levy and collect new taxes for the use of infrastructure on a per-mile basis or for time spent driving in heavily traveled districts."

In addition to the potential of dynamic road pricing models to curb congestion, the report suggested that cities would be wise to think carefully about EV- or AV-only lanes, curbside pickup instead of on-street parking and other variations on traditional road expansions.

Here again, how much people are willing to share their rides looks likely to prove important. The authors project that up to a third or vehicle miles traveled in cities by 2030 may be done by shared light vehicles, making it imperative for planners to consider varying infrastructure needs now.