The following is an edited excerpt from "The Trillion Dollar Shift" by Marga Hoek (Business for Good, 2018).

There is a growing need for the world to mobilize capital in the direction of achieving the SDGs. The investment landscape shows a large gap between the amount of capital it will take to achieve the SDGs by 2030 and the financial resources from government and development aid that are currently available.

Therefore, private capital is urgently needed. By using development finance and philanthropic funds strategically to mobilize and leverage private capital, we can propel business and create market opportunities for a more sustainable world.

From billions to trillions

To meet the investment needs of the SDGs, the global community must change the discussion from billions to trillions. There needs to be a trillion dollar shift in investments of all kinds: public and private, national and global. The goals need an innovative capital mobilization with a global change of mindset, approach and accountability to create the transformation needed in both developing and developed countries. 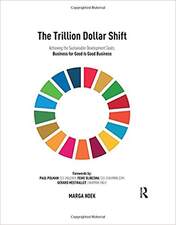 Traditionally, the majority of development spending comes from governments and public resources, yet the largest potential is from private-sector investments. This is precisely the trajectory from billions to trillions, which each country and the global community must support together to finance and achieve the vision of the SDGs. Private capital is becoming an increasingly important tool for global development as well as one of the biggest business opportunities.

The market opportunities in industries such as food and agriculture, cities, energy and materials, and health and well-being alone could create 380 million new jobs by 2030. Although this presents unprecedented business potential, we still have a long way to go.

Private capital investments can be a source of comprehensive societal profit and employment.

The allocation of capital in some areas, like infrastructure investments, currently only garners about 10 percent of its money from the private sector proving that there is ample room for growth in private sector involvement.

Traditionally, the majority of development spending comes from governments and public resources, yet the largest potential is from private sector investments. "Billions to trillions" signifies the realization that achieving the SDGs will require more than what is available in public money, it will demand that the private sector step in to fill the gaps. The financial system consists of tens of thousands of institutional participants — including regulators, banks, insurance companies, stock and bond exchanges — and billions of individual market participants — there is an immense opportunity to use this power of scale for profit and for good.

Private capital must fill most of the gap

Private capital is crucial to meeting the 2030 goals, even more so since the relative impact of Official Development Assistance (ODA) funding has diminished. A significant amount of capital is needed to achieve the SDGs. With the necessary global investment of $5 to $7 trillion, as reported by the United Nations Conference on Trade and Development (UNCTAD), to achieve the SDGs worldwide, we need all parties to participate.

Of this total amount needed in state spending, investment and aid for infrastructure, such as water and sanitation, agriculture, clean energy, transportation and telecommunications, as well as tens of billions each for such areas as health, food security and education, it will take about $3.9 trillion per year to achieve the SDGs in developing countries alone.

The funding available for this is estimated to fall short. Current levels of both public and private funding cover only $1.4 trillion. Taking the lower estimate of $5 trillion needed annually leaves a yearly investment gap of $3.6 trillion worldwide (see Figure 26). 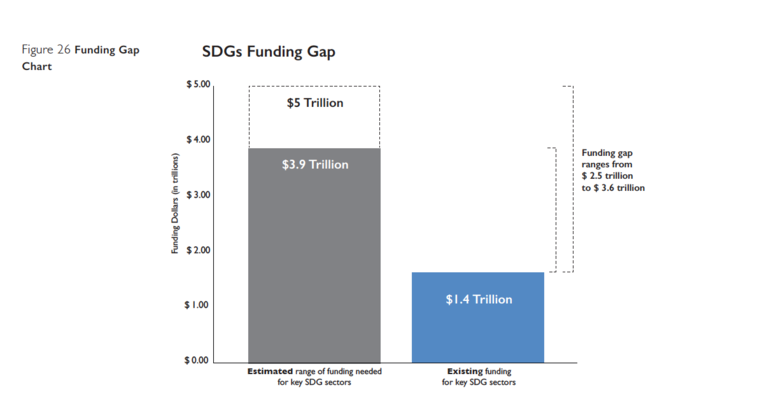 Although this amount may seem unreachable, it is small compared to the potential value that could be unlocked by investing in the SDGs. According to the Business and Sustainable Development Commission, there are opportunities worth $20 trillion or more.

The UNCTAD report shows that in 2016, the total ODA reached a peak of $142.6 billion, which is significantly smaller than the $3.9 needed for developing countries. Therefore, the estimated gap for key SDG sectors in developing regions is about $2.5 trillion.

A large part of this gap can be filled by private capital, as the amount of capital held by the private sector, both in business and finance, is larger than that of the public sector. Businesses and investors can seize this prime opportunity to shift course, reorienting themselves to invest in the SDGs.

Many of the leading attempts to reorient capital towards long-term value creation are motivated by concern about the world the next generations will live in. Aviva CEO Mark Wilson, for example, talks about "being a good ancestor." But not all business leaders and investors think like this yet, although the momentum is in the right direction.

A decade ago, the U.N. Principles for Responsible Investment (PRI) had just 200 signatories with $5 trillion of assets under management. Today, it has 1,750 signatories with a collective portfolio worth over $60 trillion. The PRI’s signatories represent around one-third of global private capital. To meet the challenge of achieving the SDGs, they would have to invest $2 trillion annually in companies and other investments that directly link to positive SDG outcomes.

By 2030, that should amount to cumulative 25 percent of assets under management having a direct positive contribution to the SDGs. As the movement accelerates, we need all capital throughout the entire finance spectrum to make the necessary shift. The breadth of private capital opportunities is already acutely evident, especially in developing countries accounting for 60 percent of GDP, 80 percent of capital flows and 90 percent of jobs.

The more we wait to address the SDGs with private capital, the more it will cost us and the larger the gap will grow.

Due to the sheer size of the capital markets — estimated to hold more than $200 trillion — they offer the ability to make the SDGs a reality in a way that public and philanthropic budgets simply cannot match.

Private capital investments can be a source of comprehensive societal profit and employment. If we take green growth, for example, and invest in businesses that combat climate change, investments which influence 13 of the 17 SDGs, they will enjoy 18 percent higher returns on the investment than companies that do not address climate impacts.

Up until recently, climate action was seen as a cost rather than an opportunity. Today, we see the significant cost of taking no action. According to some sources, inaction to combat climate change could cost $28 trillion globally by 2050. The more we wait to address the SDGs with private capital, the more it will cost us and the larger the gap will grow. Temperature rise due to climate change may also radically damage the global economy and hinder growth in the coming decades if nothing is done to manage it.

According to new research, temperature change due to unmitigated global warming will leave global GDP per capita 23 percent lower in 2100 than it would be without any warming. So how much capital is out there to help cover these costs and fill the gaps?

Moreover, many multinationals’ gross incomes outrank the national incomes of countries. There is clearly no shortage of capital in the global economy, so let’s direct it in the most efficient way for our long-term Sustainable Development Goals and fill the financing gap.

If private capital institutions and investors set a determined path to fund endeavors that drive sustainability, then those endeavors will thrive and stay on course.

According to the United Nations, it will cost about $1.4 trillion to end extreme poverty for 700 million people and meet the associated targets encompassed in SDG 1. This amount must be devoted to low and lower-middle-income countries. Further, to meet the other SDGs, investments will be required in all areas, including health, education, agriculture and food security, social protection systems, energy, infrastructure and ecosystem management.

Infrastructure, particularly energy and transport, are considered the most important investment areas. Historically, many of the relevant infrastructure-type investments consistent with the SDGs would have been made through bank lending, but this has been curtailed post-financial crisis. As a result, attention has shifted toward identifying how other large pools of capital, including institutional investors like insurance companies, sovereign wealth funds and public pension funds, could be blended to help mobilize the necessary financing.

Recent funding transactions have shown over $1.7 trillion moved across the globe as foreign direct investment (FDI) in 2015. Developed economies received the most inflows of $962 billion, while developing countries saw $764 billion and transition economies $35 billion. While it is encouraging to see FDI inflows to developing countries, the developed markets continue to dominate as the preferred investment destinations.

Developing countries require more funds than they are currently receiving and will need different amounts in various sectors. Examples of annual investments can be seen in figure 27.

When we consider the gap, it should be noted that 600 million jobs will be needed in the next 15 years to absorb the growing global workforce, mainly in Asia and sub-Saharan Africa.

In emerging markets, most formal jobs are generated by Small and Medium-sized Enterprises (SMEs), which also create four out of five new positions. However, access to finance is a key constraint to SME growth. Without access to capital, many SMEs either never get started or they stall. SMEs are less likely to be able to obtain bank loans than large firms; instead, they rely on internal funds, or cash from friends and family, to launch and initially run their enterprises.

About half of all formal SMEs do not have access to formal credit. The financing gap is even larger when micro and informal enterprises are taken into account. Overall, about 70 percent of all Micro, Small and Medium-sized Enterprises (MSMEs) in emerging markets lack access to credit.

Bridging the gap in financing, and providing the credit and employment opportunities needed for a sustainable future, is a considerable challenge. There has been, and remains, commitment from governments which is crucial since governments have the power to direct funds, instigate and enforce regulations, and steer public institutions.

In addition, they have the leverage and authority to collect and designate taxes. For example, Mexico collected $1.3 billion in the first year of its tax on sugary drinks, which not only steered the society towards healthier habits, but created income for the government to use to benefit society. But government intervention can be fickle. In democracies, when new leaders or political parties step into power, governmental aid programs can be cut or reduced.

In countries with differing political systems, or even worse, countries afflicted by political strife or corruption, governmental influence can also be unreliable. This is further confirmation of why private capital can be a steadying influence.

If private capital institutions and investors set a determined path to fund endeavors that drive sustainability, then those endeavors will thrive and stay on course.

Bridging the Gap in Biodiversity Finance