Why scallop purveyor Raw Seafoods got hooked on blockchain

Family-owned Raw Seafoods isn’t a particularly large company, but it has some pretty big-name customers for the fresh and frozen scallops, tuna, salmon and other fish processed in its 80,000-square-foot facility in Fall River, Massachusetts: regional locations for grocers from Wegman’s to Whole Foods Market. It also has invested seriously in sustainable harvesting practices that have been certified by the Marine Stewardship Council and Global Sustainable Seafood Alliance, among others.

So, I was intrigued last week when Raw Seafoods and one of its distributors trumpeted a new collaboration with the omnipresent blockchain team at tech giant IBM. The initiative, as of Nov. 1, will allow diners on the other side of the country to theoretically trace the origin of the scallops on their plates all the way back to an ocean floor in the North Atlantic ocean.

The project was born more than a year ago, after the Raw Seafoods executive team heard about Walmart’s efforts to use a digitized ledger from IBM to help monitor the provenance and quality of leafy greens — primarily for food safety reasons.

Given that an estimated 80 percent of the seafood sold in the United States is imported, the supply also is prone to many of the same concerns that Walmart hopes to address with its investment, Daniel McQuade, vice president of marketing for Raw Seafoods, told me. Specifically, it’s difficult to prove exactly where an item came from or the conditions in which it has been stored and shipped. "We are noted for our quality, standards and certifications," he said. But often, when there’s an issue with fraud or safety, the entire seafood industry gets a black eye. "Every time we have a fraud issue, it hurts all of us," McQuade said.

It’s difficult to prove exactly where an item came from or the conditions in which it has been stored and shipped.

The "a-ha" moment for Raw Seafoods' effort came when McQuade connected with a long-time scallop boat owner, and one of its most reliable and frequent suppliers in the profitable seaport of New Bedford, who already was digitizing the operations of his six-vessel fleet. The motivation was financial: By providing better data to potential buyers back in port earlier, the well-respected fleet owner, Danny Eilertsen, hoped to command a better price at auction.

Raw Seafoods took a leap of faith: it convinced Eilertsen to invest in tagging his fleet’s catch using blockchain technology in exchange for paying a premium for the scallops harvested and tagged by his crew with information such as the exact GPS location, size, the grade, weight, the name of the boat, the captain and so forth. (Because Eilertsen pays his crew a percentage of the haul, that extra profit is shared.) 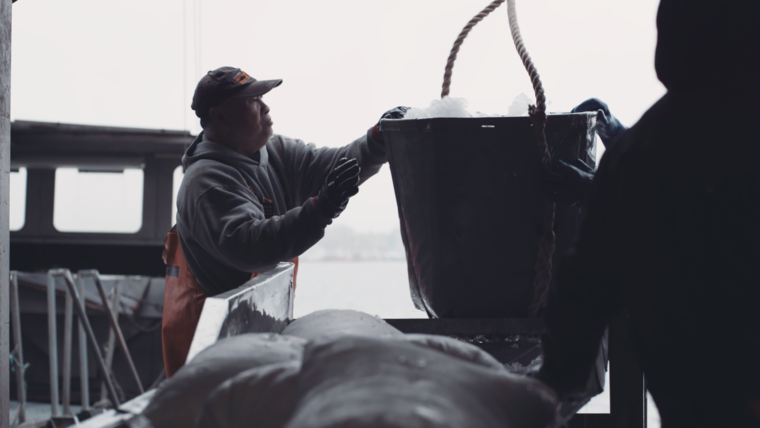 Why is that important? The nature of blockchain projects, of course, is that they work best when distributed across an ecosystem of suppliers and distributors and buyers and sellers — you need every member to participate for the information that’s shared to become really valuable.

All of the data contributed by Eilertsen's fleet, including images and video, is uploaded to the IBM Food Trust service in the cloud. That 50-pound bag keeps collecting data along the way. "He shares the data, he shares what he wants us to see," McQuade said. "We pack and inspect and add our own information."

It took an investment of at least $50,000 in the software, hardware — including scales where the scallops are cleaned, bagged and tagged — and satellite communications equipment to pull this off on the boat alone, McQuade estimated.

This data will help us forge a more direct and fruitful partnership with the captains and crew that are harvesting the seafood we serve.

The distributor that’s initially bringing these super-transparent scallops to the West Coast is Santa Monica Seafoods, which as of next week will be delivering the scallops to at least two local restaurants. "This data will help us forge a more direct and fruitful partnership with the captains and crew that are harvesting the seafood we serve," said Tom Hope, director of food and beverage at the TAPS Fish House & Brewery, one of the first restaurants that will receive the tagged scallops. "Not only will the data help us be more strategic as a business, we think customers are going to love it."

For its part, the information shared via the blockchain will help Raw Seafoods prioritize boat captains who use sustainable fishing practices and prove that its product does, indeed, come from U.S. waters as the company claims its marketing. The U.S. scallop industry is tightly controlled to 50 million pounds of harvest annually, and each fleet is limited in the amount it can catch (ranging from 17,000 to 18,000 pounds per boat depending on location and season).

Raw Seafoods is working on a consumer-facing app that eventually will allow consumers to view the data on menus or at the point of sale. "We want to share this," McQuade said. "This is not just about us — this is about enabling people to trust what the industry is saying."

The rise of seatech — a new world wide web

The need to digitize traceability is key to enabling circularity