Why Sinking Cleantech Investment Data Aren't the End of the World

That's just what happened last year. In 2011, venture capital investment in early-stage cleantech companies fell by 4.5 percent, to $4.9 billion, compared with the 2010 tally, according to a round-up of full-year data by Ernst & Young published Feb. 1, based on data from Dow Jones VentureSource.

Whether this downtick is cause for concern is open to argument. The question links to hot-button issues being debated in Congress, on the campaign trail, and in the media. I, for one, believe that given the headwinds facing cleantech, the numbers are cause for optimism. They're good news, but I wish they were better. 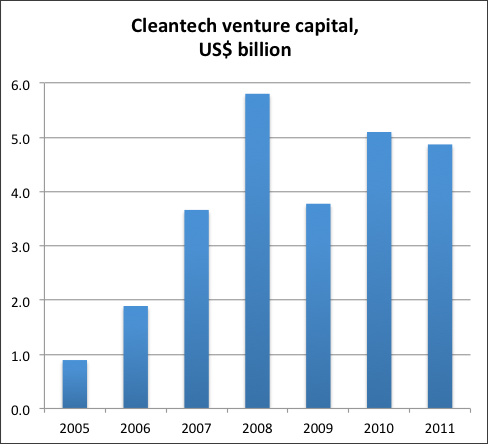 To make my half-full case, note that cleantech venture capital investment has been resilient despite both economic and political headwinds. Last year's funding remains 29 percent higher than its 2009 total, when overall venture flows crashed in the wake of the global financial crisis.

Still, I'm a worrier. And there are reasons to furrow my brow at these numbers.

However promising cleantech may be, venture capitalists are finding more alluring options in other sectors. Cleantech's decline comes despite a 10 percent rise of overall venture capital investment. Globally, for the year, investors placed $32.6 billion into 3,209 venture deals, according to Dow Jones Venture Source.

So while cleantech retreated, investment in healthcare and IT startups remained roughly steady. The big winner? Consumer information services -- think Twitter, LivingSocial and Zynga -- pulled in $5.2 billion, up 23 percent from the prior year.

But before I complain any further that clean technology shouldn’t be losing out to Twitter, let alone Facebook, here's a bit more on what went down in cleantech over the past year.

• Battery technology is hot. Energy storage continues to attract interest, and growing flows of money. Venture investment in batteries rocketed up by 253 percent. And this is bound to accelerate. Growing volumes of electric vehicles, plus the graduation of wind and solar from emerging-tech status to mature technology, are all driving demand for energy storage, in a dizzying array of niches.

And while some segments of battery manufacturing are mature -- increasingly subject to the sorts of commodity price dynamics driving down prices of solar PV -- there is arguably bigger potential for scientific discovery to upend today's batteries.

• Investment is tilting towards more mature plays. Cleantech companies already generating revenue garnered 69 percent of the funding, up from 50 percent in 2010.

• M&A exits dominate. Given the parlous state of IPO offerings, mergers & acquisitions continue to be the main path to maturity for cleantech players. In 2011, a total of $2.9 billion in M&A deals involved cleantech startups, some 79 deals, according to Ernst & Young's analysis.

• IPO drought lingers. Just five companies IPO'd in 2011, not many more than the three that listed a year prior. Biofuels dominated last year's public debuts, with Solazyme, Gevo, and KiOR. Intermolecular, a semiconductor R&D company focused on cleantech listed in the final quarter, as did Rentech, a clean energy solutions provider. The five raised a total of $688 million.

The low count of IPOs for cleantech is an indicator of a growing backlog and is one reason why new cleantech investment may be slowing. Without a clear line to exit, venture funders will steer their money to sectors where it's easier to cash out.

Thus, Facebook. Good things may yet come of Facebook's super-hyped IPO. Perhaps it will improve the atmospherics around cleantech IPOs?

But on balance I find the din disheartening. The very big IPOs by Twitter et al. smack of hype. To emphasize my point: Facebook's pending IPO is likely to raise around $5 billion, more than was invested by VCs in the entire cleantech sector last year. Indeed, Facebook's valuation is verging on speculation, maybe even magical thinking. The offering is slated to value the total company at $100 billion.

Compared with the foaming enthusiasm for all-things-Facebook, it can feel like cleantech has drifted into a period of backlash, however undeserved. Investment continues apace to be sure, but the narrative around cleantech is growing more polarized.

Blame domestic politics for the widening gap in cleantech prospects here compared with global markets. Leading the negative push—recklessly so—are House Republicans, who seem intent on vilifying federal support of renewable energy, using Solyndra's failure as a political bludgeon against President Obama. Likewise, the GOP presidential aspirants have retreated on cleantech: far-right opposition of climate change is so dogmatic, even discussions of cleantech have become off limits despite the fact that practically all the Republican candidates have championed renewable investment in the past.

Meanwhile, media find it hard to resist the counter-intuitive appeal of the "cleantech is failing" tale, and are amplifying the meme. Picking up on the GOP's talking points, the tally of stories of Solyndra's failure far outpaces coverage of the fact that it's been a record year for solar capacity growth in the U.S. Or that plummeting solar prices are a windfall for buyers of the technology, enabling even energy-poor regions such as India to light up. 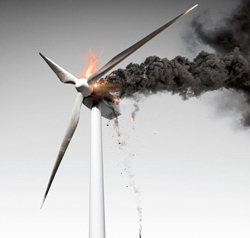 Witness Wired magazine's February story "Why the Clean Tech Boom Went Bust." While its author, Washington Post's Juliet Eilperin, actually offers a reasonably measured take on the impact of cheap natural gas and the Solyndra scandal, you'd have a hard time figuring that out from the headline or the explosive artwork illustrating the story (at right, by Dan Forbes).

Lurid pictures of exploding wind mills, fiery biodiesel canisters, and a shattering PV panel left me thinking that John Doerr must be on the verge of switching back coal heat for his mansion. Meanwhile, elsewhere on Wired.com, the breathless all-technology-is-pretty-much-cool coverage of green developments continues apace.

Wired's schizophrenic take on cleantech is not unique, but it deserves special attention because the magazine has been such a vocal, effective champion for innovation as a driver of economic growth. The editors' tabloid take on cleantech is sure to gather clicks: scores of contrary comments and irate tweets suggest the story has generated a lot of attention.

But in gunning for controversy, Wired goes off target, loosing sight of the bigger, better idea that cleantech is a near-ideal innovation catalyst for U.S. economic growth. That's why we should keep our fingers crossed that venture capitalists will keep steering more money into the sector too.