Why Sprint is dialed in to machine-to-machine communications

Most customers of wireless phone companies don’t know about “machine to machine” communications, or M2M, as it’s come to be known. But behind the pricing and quality-of-service wars waged in the United States by AT&T, Sprint and Verizon — and by their counterparts around the world — lies a fast-growing opportunity. Instead of just connecting people making calls, M2M allows machines to similarly converse — often without any human intervention.

M2M — and its collaborator, the Internet of Things — is shaping up to be a massive business opportunity: nearly a trillion-dollar market by 2020, according to one recent forecast. As the cellular calling market saturates — nearly everyone on the planet has a mobile phone these days — M2M will become a growing focus.

Where is the M2M biggest? Where is the untapped opportunity — and the opportunity after that? I recently spoke with Wayne Ward, VP for M2M at Sprint Nextel. Ward is a 23-year veteran of the company. In 2009, as the company began to invest in M2M, Ward was asked to create an Emerging Solutions Group. Today, that group has 4 million M2M subscribers, leading the company to rethink the business unit’s name. As Ward told me, “It’s really not emerging anymore. It’s here.”

Also, while in Kansas City last month, I visited Sprint’s Executive Briefing Center and got a show-and-tell tour about some of the company’s M2M technologies. You can view that video further down this story.

Here is an excerpt from my conversation with Ward, edited for clarity and length.

Joel Makower: How do you view the M2M opportunity at Sprint? Is this bigger than the wireless phone business?

Wayne Ward: It’s not bigger in terms of revenue than the smartphone business — people calling people, people texting people, people accessing the Internet from their smartphones. Let’s call that “P2P,” if we’re going to call this M2M. That business has been around almost 20 year now, and there’s still a lot more revenue there. So, I don’t think we’re going to catch up for a long, long time on the machine-to-machine side because there’s just so much money in our industry on the P2P side of the house.

Makower: We ran a story recently about a study that came out of the Carbon War Room. It looked at four M2M applications — energy, buildings, transportation, and precision agriculture — and basically said it was just shy of a trillion-dollar opportunity by 2020. So, does this become bigger than P2P at some point?

Ward: It could. My crystal ball’s not clear enough that far out, but I can tell you that we’ve been seeing significant doubling of the growth of subscribers over the last four years and pretty much every research study out there says that there’s going to be this hockey stock of year-over-year growth and CAGR growth associated with M2M.

Makower: Where is the market unfolding now and how do you expect it to shift over the next few years?

Ward: We refer to the market in two different segments — “things with wheels” and “things without wheels.” So if you take a look at wireless or connections in general, they are static connections. A house doesn’t move around, so a smart-grid meter can be served with a multitude of technology; cellular is one of them. That’s a static application that can be serviced with machine-to-machine, but it doesn’t have to be cellular.

Then there’s portable devices, and that would be things like a digital sign, an ATM machine, informational kiosk or vending machine. Those are things that can be lit up and put in a temporary location and moved across the building or put in a truck and sent across town, or put in a plane and shipped cross-country. You turn it on, it’s up and running, again. Those are portable devices where a cellular connection is a lot easier to manage. You don’t have to pull cables. You don’t have to find an outlet to plug into an Ethernet jack. You’ve got up-and-running connectivity built inside the box.

And then, of course, there’s the things on wheels: planes, trains, subway systems, transit systems, ambulances, fleets, consumer vehicles. All of those at some point will be connected.

Makower: There seems like a lot of potential here to make everything that uses energy more efficient. 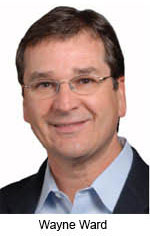 Ward: Consider energy management — something that would be in the category of “things without wheels”: being able to remotely monitor your power consumption and turn things on and off, monitor cooling systems and heating systems and make sure that they’re operationally efficient; being able to monitor any spikes in usage, even if it’s a non-demand facility.

That’s one very, very big segment. And Sprint just had an announcement regarding retail energy-management solutions we’re putting in all in all of our retail stores, so that if the store manager forgets to turn lights off or lock the doors, or left the heater running all night when it shouldn’t be, then we have the ability to turn things on and off.

The second segment is in the fleet-management category, where we’ve got lots of products that measure compliance with state laws around carbon emissions. They deliver intelligent dispatch solutions to owners of fleets that make sure that they get the closest vehicle to the pick-up as possible.

Field service applications are another one — you’re driving information off a machine, like an HVAC system, for parts replacement and field service so that you have the right inventory and parts on the truck before it ever is dispatched, and only have to make one trip. And the trips are as efficient as possible by designing in intelligent routing and dispatch applications.

We’re also seeing an uptick and interest in remote metering — water, heat, and energy usage and consumption. So, for example, at a park sprinkler system, if there’s a spike in the water bill, rather than getting the bill a month later and realizing that there was a problem, being able to monitor the use of water for a facility and, in real time, see a spike in usage so you know that you have a leak or a faulty sprinkler head.

Lastly, we’re seeing a lot of interest — and we’ve actually lit up quite a few of these — in electronic vehicle charging stations. So one of the problems for the uptake of electrical vehicles is the fact that there are gas stations on almost every street corner, but you may have to drive quite a bit to find a charging station. So a lot of those are being developed and deployed in public venue locations, and they need to be connected.

Next page: What’s so special about EV charging stations?

Makower: What’s so special about EV charging stations, from an M2M perspective?

Ward: They need to be connected so that they can do credit card authorization and transactions for the purchaser, but also be able to manage and monitor the energy flowing through those charging stations so they can charge accurately. You can dig through the streets and try to find cable, and engineer all kinds of different wireline solutions, or you can put a radio module in and put it in a public venue and you’re up and running. The use of cellular technology can help actually build out the EV charging station application. ECOtality, which operates the Blink Network on Sprint, is an example of that. And so that’s also providing a pretty big opportunity for machine-to-machine perspective.

Makower: What do you see coming up next, and maybe next after that?

Ward: More of what I just said, and that’s not a crass answer. It’s the truth. So, for example, connected vehicles. There’s still 250 million cars on the freeways today in the U.S. Five percent are connected. So while you hear a lot about connected vehicles, and a lot of automobile manufacturers building new cars with connected-vehicle solutions in them, the fact is every car since 1996 has a port in them where you can connect a wireless plug-and-play solution to participate in some of these applications. A lot of those vehicles are not yet connected, up to 95 percent. That is going to be a very large growth opportunity. Two hundred fifty million vehicles is roughly equal to the size of the number of subscribers that all the carriers have on smartphones today, which is roughly a little over 300 million.

Beyond that, there’s the concept of the smart home. A lot of folks that are buying new homes today are outfitted with smart-home technology. Their appliances are wirelessly connected. They can manage the audio systems and their heating systems and their security and alarm systems, all through a single console. Again, you have a lot of older homes out there today that don’t have that technology built into them from the get-go.

There are a lot of appliances and products and home-automation products that will be retrofitted into homes to turn, for lack of a better word, older dumb homes into smart homes. People joke about the connected toaster. I don’t ever see that happening, but I do see the major appliances that draw significant power, being connected.

After that, I would say the sky is the limit. I would almost think that anything in the future that draws power or requires power will probably have some type of cellular connection it. If nothing else, it will be able to manage the power consumption of that device.

Makower: It seems like this has gotten really competitive really fast. Every telecom company has some M2M offering, or seems to making a stand in the space. How does Sprint plan to differentiate itself? Is this going to be like P2P wars we’ve seen over the past few years around reliability? What’s going to happen?

Ward: I’ll tell you what our strategy is, which I think differentiates us relative to our competition. Number one, we’ve been in it for a long, long time. We’ve been selling fleet-management solutions before the word M2M was ever coined or uttered; we just didn’t call it M2M. And a lot of those are still in our base. So it’s one thing we differentiate on — that we’ve been doing this for about 12 years, and it’s been part of our core DNA and service offering for a long, long time.

Makower: But you’re in a technology space where disruptive newcomers come in all the time and upset the apple cart. So 12 years is great, but it’s kind of a “What have you done for me lately?” sort of thing, no?

Ward: It’s easier to build a business and grow a business if you have a base of customers that you can upsell, cross-sell, and base-manage to. So, one thing that gives us an advantage in the machine-to-machine space is that a lot of the applications I talked about  — connected appliances, metering, some of the charging stations, kiosks and couponing machines and vending machines — all they require is 2G technology, but they don’t want to engineer that thing three times over the next ten years.

So one advantage we have with our Network Vision platform is we can offer 2G, 3G, and 4G services for many, many years, so we can literally dedicate very specific bandwidth and protocols to the machine-to-machine space and keep them in our network for a long, long time.

Makower: Do you agree with my premise that this is going to get pretty cutthroat pretty quickly?

Ward: It already is. But the insurance business is about as cutthroat as you can imagine. Try selling automobiles — the industry has razor-thin margins. The grocery business operates on 1- to 2-percent margins. It’s all about volume.

Image by filip robert via Shutterstock

Why investors are betting on biodiversity

At last, corporate sustainability reporting is hitting its stride