Why sustainability should be America's 'grand strategy'

Here's a business plan for America, born at the Pentagon.

This story begins in the Pentagon.

In July 2009, two United States military officers, a Marine colonel and a Navy captain, were sequestered in Room 2E928, on the second floor of the building’s E-ring, the outermost of five concentric corridors, where the highest-profile work is done. There, just a few months into Barack Obama’s first term, Col. Mark "Puck" Mykleby and Capt. Wayne Porter were given an assignment by Adm. Mike Mullen: to create a grand strategy for America.

Not a military strategy. We already had one of those — several, in fact. Mullen was seeking a strategy for the next chapter of America’s future. 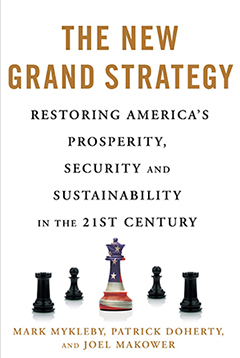 At the time, Mullen was the 17th Chairman of the Joint Chiefs of Staff, the highest-ranking officer in the United States Armed Forces, nominated to the post a year earlier by President George W. Bush. It was the culmination of a distinguished 40-year career, which also included assignments as commander, U.S. Naval Forces Europe; commander, Allied Joint Force Command Naples; and vice chief of naval operations.

As chairman, Mullen found himself frustrated. "I caught the Bush administration in the last 15 months, and they were beat to death," he recalled when we spoke with him in 2015. "Iraq hadn’t gone well, and I wanted to know what Obama was going to do when he came in. What’s the strategic approach?"

Up to that point, there was no strategy — at least, none that related to the 21st-century world Mullen and his troops were facing. America’s Cold War strategic architecture remained largely intact, designed for a world that no longer existed. Our once-prosperous economic engine, built in the 1940s and ’50s, had recently collapsed from too much debt — and the only way to keep the machine going was to feed it even more debt.

By the summer of 2009, it was clear that the Cold War-era global institutions and capabilities, designed to control and coerce through military force and technology, were ill-suited to the current era. Our national security mind-set was reactive, able to manage crises as they arose but with no ability to envision, much less define, a new strategic era.

This was no idle concern. Our threat-centric worldview had very real consequences for the United States. We had spent the first decade of the 21st century focused on al-Qaeda, Iraq and Afghanistan, running up trillions of dollars of debt fighting wars with little to show for it. Meanwhile, the rest of the world focused on the economic opportunity embedded in the resurgence of Asia, as well as the emerging threats from climate change and the opportunities for new technologies to help solve it. By early 2009, when Adm. Mullen met Barack Obama, his new commander-in-chief, America’s post-9/11 worldview inspired little, if any, enthusiasm beyond our shores.

Mullen wanted a new, more relevant narrative of where America stood in the world and where it wanted to go — in effect, what the million and a half or so men and women of America’s armed forces were fighting for.

So, Mullen wanted Porter and Mykleby to offer up a new, more relevant narrative of where America stood in the world and where it wanted to go — in effect, what the million and a half or so men and women of America’s armed forces were fighting for.

"I had this constant need for a strategy and an inability to get interest from anybody — quite frankly, right up through the White House,” Mullen recounted. "I wanted to know how I fit in. I had significant leadership responsibilities and I needed to know where to go. I needed something for the country."

He added, after a momentary pause, "Now, those are not words that come out of the chairman of Joint Chief of Staff's mouth because that’s what the president is supposed to do." But Mullen wasn’t getting what he needed from the White House or anyone else.

He charged Col. Mykleby and Capt. Porter with the mission of creating a vision of the future. "First of all," he told them, "it’s got to be different. And second, it’s a lot bigger than just the military."

Those, in effect, were their marching orders.

From narrative to strategy

A month later, in August 2009, Mykleby and Porter emerged with a document titled "A National Strategic Narrative." It outlined an approach "to achieve sustainable prosperity and security … through the application of credible influence and strength, the pursuit of fair competition, acknowledgment of interdependencies and converging interests, and adaptation to complex, dynamic systems — all bounded by our national values."

Substantively, the National Strategic Narrative argues for a grand strategy that focuses foreign and domestic policies toward the common goal of building our national strength and credible influence. And in doing so, that strategy would allow us to adapt, compete, grow and evolve in a manner commensurate with our values and sustain us over time.

In fact, the document cited sustainability as our No. 1 national strategic imperative for the 21st century.

Why should sustainability serve as the centerpiece of a new American grand strategy? The reason lies in its literal scientific definition. Sustainability describes the state in which biological systems are able to "remain diverse and productive over time." Porter and Mykleby believed this definition fit nicely into America’s purpose: diversity fosters resilience, and productivity leads to growth — resilience and growth being two critical aspects of America’s enduring national interests of security and prosperity. Equally important, "over time" reminds us that we must think and act in generational terms, not just in the here and now.

Mykleby and Porter delivered their narrative to Mullen, who liked what he saw but also recognized the political sensitivities of releasing the document, given what it said and that it was coming from the office of the military’s most senior officer. Porter and Mykleby began seeking feedback from individuals within the executive branch and among Washington’s many think tanks. Early on, they met Dr. Anne-Marie Slaughter, then director of policy planning at the State Department. Slaughter rapidly became a key advocate for Porter and Mykleby and their narrative, opening doors on their behalf within the Washington establishment.

Still, the National Strategic Narrative languished in the Pentagon for almost two years. It wasn’t until 2011 that the report was introduced to the public, when former California Congresswoman Jane Harman, in her capacity as the new head of the Woodrow Wilson International Center for Scholars, published the document and hosted a public debate on its merits, moderated by New York Times columnist Tom Friedman, who quickly became another key advocate for the narrative.

The document cited sustainability as our No. 1 national strategic imperative for the 21st century.

Yet even with this support, the narrative made little impact in Washington. In the end, the National Strategic Narrative was met with a big "So what?"

After a two-year push for an integrated strategic conversation, the situation became all too clear: Washington had allowed its strategic muscles to atrophy since the days of President Dwight D. Eisenhower, and there was, and remains, little will or capacity to actually do anything that resembles a grand strategy.

Fitting the piece together

In 2011, after 28 years in uniform, Mykleby retired from the Marine Corps and joined the only civilian policy program in Washington that was working on grand strategy. Housed at the think tank New America, the program was founded by Patrick Doherty, a foreign policy and macroeconomics expert who had seen the need for such a strategy while working in conflict zones from the Balkans to the Middle East to sub-Saharan Africa.

Mykleby and Doherty worked out a simple framework for developing a grand strategy: identify the broad contours of a sustainable economic engine that could do the nation’s heavy lifting and tailor the foreign policy to match. In 2014, certain that a Beltway-based effort was not possible, Mykleby and Doherty began that quest, launching the Strategic Innovation Lab at Case Western Reserve University in Cleveland.

Meanwhile, in 2013, Mykleby met GreenBiz chairman and executive editor Joel Makower, whose company is at the forefront of convening corporations, entrepreneurs, policy makers and others to explore the technologies, business strategies and new business models that align business objectives with sustainability and resilience. Makower signed on as a senior fellow at the Strategic Innovation Lab.

Suddenly, the pieces fit together: a military strategist, a policy strategist and a sustainable business strategist who arrived at a similar vision from different disciplines, perspectives, political leanings, even generations. That convergence led to "The New Grand Strategy: Restoring America’s Prosperity, Security and Sustainability in the 21st Century."

The book tells the story of a grand strategy, born within the Pentagon, to recapture America’s greatness at home and abroad by elevating sustainability as a strategic imperative. It aligns America’s enduring national interests of prosperity and security with a new framework that blurs the lines between domestic and foreign policy by addressing pressing economic, security, political, social and environmental issues at home, and looking at how those issues impact and connect with the global community.

It is an inspiring vision of what’s possible when Americans hold an optimistic and opportunity-centric view of the future and come together to bring it to reality.

This is no idealistic pipe dream or wonky policy prescription. The story that unfolds weaves together hardnosed economic analysis, a clear-eyed study of demographic and societal shifts, the implications of climate change and resource scarcity, a risk assessment of America’s challenges and opportunities and on-the-ground reporting of solutions that are already being implemented across the nation. By rediscovering the power and discipline of grand strategy — and taking responsibility for our future — we can reimagine the American dream and once again take on what Thomas Paine called "the cause of all mankind."

In many respects, the collaboration and ideas contained in "The New Grand Strategy" represent the best of the America we intend to illuminate: a nation rooted in a deep and rich history, unbound in its vision, capable of turning seemingly insurmountable challenges into vast new opportunities, always seeking to be an example to the world.