Companies continue to rank low among global institutions when it comes to sustainability leadership, though a few companies — mostly the usual suspects — continue to rise above the others, according to an annual survey being released this week.

If that sounds like damning with faint praise, it is. According to the 2013 Sustainability Leaders survey (download - PDF), produced jointly by GlobeScan and SustainAbility, the private sector outperforms only the world’s national governments when it comes to effectively addressing sustainability challenges. That is to say, their second to last.

Still, a handful of companies — and one in particular — are highly regarded. Unilever continued its reign as the top-ranked company and actually increased its score, according to the survey, which is based on the responses of 1,170 “qualified sustainability experts” polled earlier this year. Companies are named on a top-of-mind basis — that is, they are asked to name leadership companies but aren’t given a list from which to choose.

Another top-tier companies was Patagonia, which “catapulted to the No. 2 position on back of strong gains in last year,” according to the study. Interface and Walmart round out the top four, with 10 additional companies clustered roughly with similar rankings (in descending order): GE, Marks & Spence, Puma, Nike, Coca-Cola, Natura, IBM, Google, Nestlé and Novo Nordisk. Puma was notable for being the only one not to have appeared on the previous rankings, done in 2012. 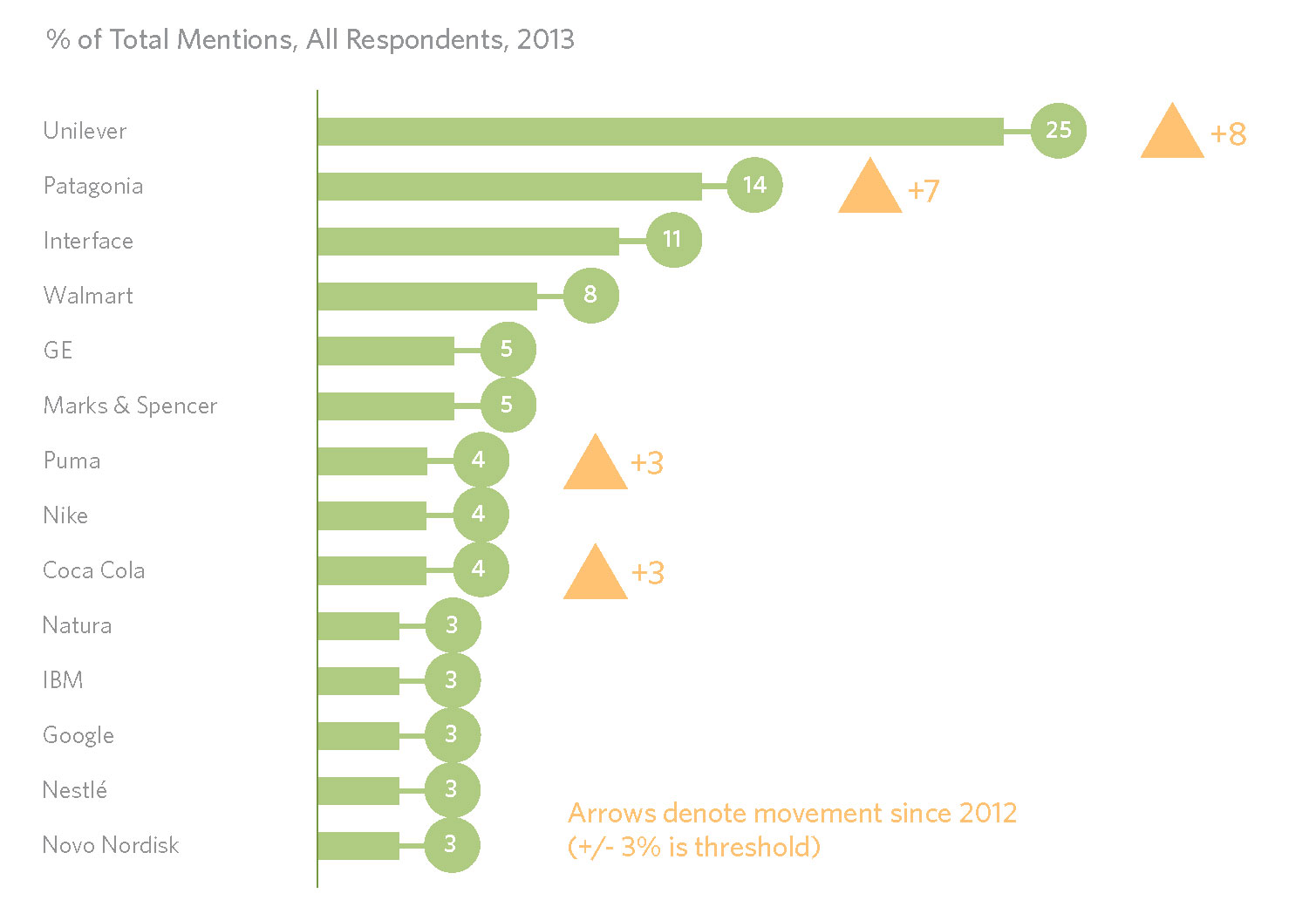 In addition to naming names, respondents were asked to include a few words about their rationale for the companies they picked. “Commitment to sustainable values” was the primary reason a company was cited as a leader, consistent with previous surveys. Transparency and communication, integration into core business model and environmental, waste, and water management rose in importance in 2013.

“The really big thing is that Unilever has just rocketed farther than anyone else, so there’s a lot less diversity in the rankings,” said SustainAbility research director Chris Guenther, in assessing this year’s results. “In the past, what we’ve seen is that companies go up to the top of the list when they make a big splash, and stay up there for a couple of years, then inevitably taper off and fall down the list when someone else captures imagination anew.”

That hasn’t been the case with Unilever. “There’s nothing terribly new about its Sustainable Living Plan, almost three years into it,” he said. One reason for Unilever’s top spot may be that “no one else has come along with anything better,” Guenther surmised.

There is broad consistency in leadership opinions across the world. The primary distinction is relative opinions of corporate and NGO leadership. Corporate leaders rank higher than NGOs in Europe and Oceania, but far lower in North America, Latin America/ Caribbean and Africa/Middle East.

Over half of experts are unable to name a sustainability leader from the developing world. Brazil’s Natura and India’s Tata were the only companies that garnered more than 1 percent of mentions from experts in Europe and North America. 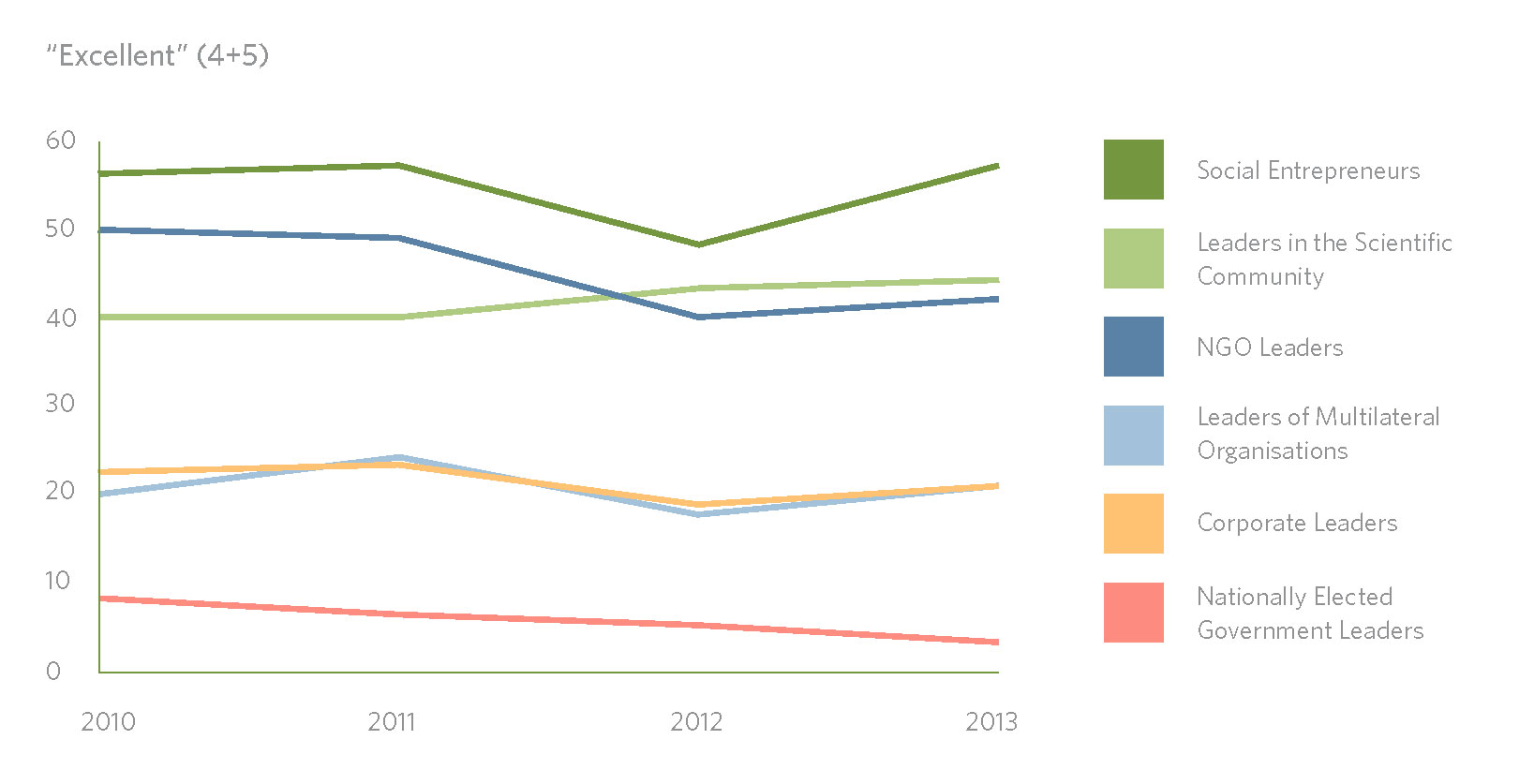 So, if companies aren’t seen as leaders, who is?

Leaders in the scientific community, NGO leaders, leaders of multinational organizations — but, most of all, “social entrepreneurs,” who are now perceived as the sector advancing the sustainability agenda most.

That seemed curious. “I think people reflexively think that’s a good institutional form, even though people can’t point to specific social entrepreneurs that are making a difference,” Guenther explained. “I think what they respond to is the label.”

Note to big companies: Embrace the mantle of social entrepreneurship and you just might win some hearts and minds.

Can accountants save the earth? Don’t count on it.

Paul Polman on his new book and 'courageous companies'

Can employees lead the charge on climate action?

Climate Week: Getting it done and making it real