Why is water usage declining across the United States?

To the residents of drought-stricken California — who are constantly being reminded to turn off sprinklers and take shorter showers — it may come as a surprise that, according to a recent report by the Pacific Institute, water usage in the U.S. actually declined between 2005 and 2010 across all sectors.

Last week, the organization released a report using data from the U.S. Geological Survey on water usage trends in the U.S. looking back and found that total water usage peaked in 1980 at 440 billion gallons of water per day (bgd) and has declined since then to 350 bgd in 2010. The biggest drop started in 2005 when the U.S. used about 410 bgd. Measured on a per capita basis, water use fell from close to 1,300 gallons of water a day per capita in 2005 to 1,100 gallons in 2010.

Much of that decline came from a change in how power plants are cooled. The thermoelectric power industry historically has accounted for about half the water consumed in the United States — and it still does. However, because the industry began changing to closed-loop cooling about a decade ago, water used for thermoelectric energy declined by over 20 percent between 2005 and 2010, from just over 200 bgd of water used to 160 bgd.

But the Pacific Institute, an Oakland, Calif.-based NGO that deals with addressing climate change, water shortages, habitat destruction and environmental injustice, warned against complacence in water conservation. Throughout the Western United States, a drought is in its fourth year, requiring signficant adjustment.

"I think if we look at water use levels say in 1980, if we were still using water at that rate, the drought would have a much more severe impact. ... The fact that we are using less water than we would have if we hadn't implemented efficiency standards really reduces the impact of the drought," said Pacific Institute’s Water Program Director Heather Cooley.

She said there is considerable work to be done to conserve water, especially clean water, because the drought and the impacts of climate change continue to compound problems of water scarcity.

Still, the data is surprising. It may be hard to fathom that water usage has declined as population and the economy have continued to grow; however, the report lays out ways in which regulation and water efficient solutions have counteracted this growth. 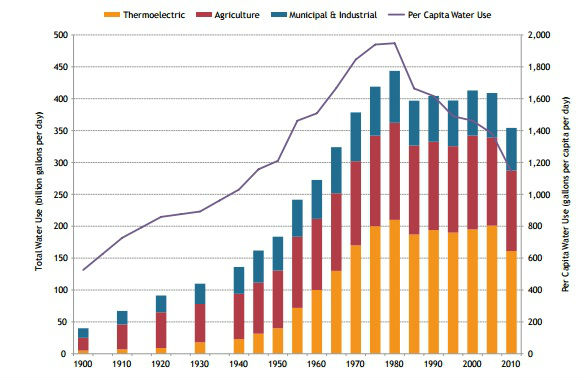 Manufacturing declined sharply in the U.S. in the 1980s, and thus water use. But while there was a decline in water usage for the past three decades, Cooley noted that the most recent data set from 2005 to 2010 was different.

“One of the things we saw, in particular, with this 2010 data was a decline in all categories," she said.

"The largest were in thermoelectric power, and that is an important reversal of a 25-year trend of increasing water use for that sector,” she said, but water use also declined "in municipal, and industrial, in agriculture" uses.

Thermoelectric power plants can be fueled by fossil, geothermal, nuclear and biomass fuels. Any of them use a significant amount of the water for cooling the plants to prevent overheating. But they used to use more.

“There’s a shifting within that industry happening — in my opinion, it’s not happening fast enough — but all new power plants in the United States use what’s called closed-cycle cooling instead of once-through cooling. … Those regulations were put in place a little over a decade ago and that’s one good thing that’s happening in our water works,” said the National Resource Defense Council’s Director and Senior Attorney Steve Fleischli.

With the former process of once-through cooling, millions of gallons of water were sourced from lakes, streams, rivers and oceans to cool power plants. After water cooled the plants, the water became extremely hot and generally was released back into the original body of water.

Closed circuit cooling actually can reuse the cooling water, rather than simply discharging it into the lake, river, stream or ocean, by evaporating the hot water in cooling towers. This process has been used on most new thermoelectric power plants since the 1970s.

According to the USGS, thermoelectric power is the largest user of water in the country, and in 2005 over 49 percent of total water usage was by thermoelectric power plants. But that amount nonetheless declined by about 20 percent between 2005 and 2010 from just over 200 bgd of water used to 160 bgd.

The Pacific Institute’s report may give optimism to those concerned about current water usage, but one may wonder what this holds for the future. Are we moving toward sharper declines in water usage or have we simply hit a plateau in efficiency?

“I think it shows that we can have efficiencies and improvements in our systems and still maintain economic prosperity; there’s still gains to be had. … We’re still using water far less efficiently than we could be,” said Fleischli.

“We have certainly made a lot of improvements, but we have a lot further that we can go. We still use more on a per capita basis than other parts of the world,” said Cooley.

“I think we need to price water for agriculture appropriately. And in many places we are not doing that,” said Cooley. “For example, in many areas for groundwater the only cost that’s being paid is the energy cost to bring it to the surface. So there is very little incentive, except for the energy cost, to be using water more efficiently.”

Once water is priced efficiently, the market forces will drive farmers to become more incentivized to use already existing technology to maximize water consumption.

“One of the most important things folks (farmers) can do is move toward drip irrigation and micro-irrigation of water and also making sure that crops get water when they need it the most," Cooley said. "Sometimes water is not delivered when the crop can use it most effectively.”