Why we should shift to local climate metrics

Why we should shift to local climate metrics

The world recently surpassed an increase in average global temperatures of 1 degree Celsius (1.8 degrees Fahrenheit) as compared to pre-industrial times. This was a significant milestone, as it marked that we are halfway to a tipping point at which scientists believe the impact of climate change may become irreversible.

One might think that such an ominous milestone would have been met with broad public concern. After all, a 1 C increase in global temperatures means that climate change no longer can be considered a future phenomenon, as the adverse effects are being felt today. Instead, this milestone barely made it into the daily news cycle.

While other global events often drown out focus on this critical topic, another reason may be that average change in global temperature is a flawed metric for communicating the seriousness of the issue with the broader public.

First, a 1 C change is an abstract concept for most. In the human experience, no one would bat an eye if the ambient temperature changed by so little, so it is not intuitive that such a seemingly small temperature change on a global scale could wreak such havoc on our environment.

Average change in global temperature is a flawed metric for communicating the seriousness of the issue with the broader public.

Second, an average implies uniform change globally, when, in fact, it has been highly variable across geographies, topographies and seasons. For example, according to the National Oceanic and Atmospheric Administration, over the past four decades, surface temperatures have risen 2.5 times more over land than over the oceans. Such a dramatic increase in land temperatures is lost when using averages, even though it disproportionately will affect the human condition in the near term.

Climate communicators need not to look far afield to understand the flaw in relying on averages. As the marketing adage goes: "There are no average customers. Some people like iced tea and some like hot tea, but very few ask for lukewarm tea."

Communicators should rethink how rising temperatures are communicated to the broader public. One logical shift would be to more broadly communicate local or regional temperature changes and trends. This could be based on annual regional averages or by season. Doing so also would highlight dramatic changes that disproportionately affect local environments and ecosystems. 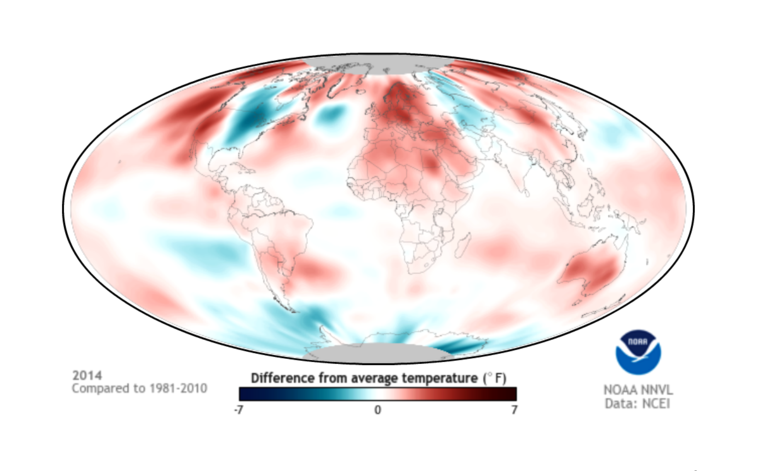 National Oceanic and Atmospheric Administration
<p>Difference in world temperature of 2014 compared to 1981-2010 average.</p>

Yet while local metrics may be more effective than global in communicating the seriousness of climate change, research suggests that there may be a limit to how effective any metrics are, as people tend to value their own experiences over statistical evidence.

The proper role for metrics is not to use them solely as evidence to convince individuals that change is actually happening, but rather as affirmation of a change already being felt locally.

Such preference for personal empiricism can be detrimental, of course, if it if it leads people to dismiss scientific evidence such as the very existence of anthropogenic climate chance.

But it also can also be a good thing if personal experience and intuition concurs with scientific findings. In fact, studies indicate that humans are able to perceive local temperature changes as well as changes in the onset and duration of seasons. Significantly, "individuals who live in places with rising average temperatures are more likely than others to perceive local warming."

If the public already senses rising local temperatures then the proper role for metrics is not to use them solely as evidence to convince individuals that change is actually happening, but rather as affirmation of a change already being felt locally. This would necessitate a shift in how we communicate metrics from reporting to validating personal experience.

Such validation would strengthen conviction around what many people already know and embolden them to share their views with others, amplifying word of mouth.

Global Warming an 'Urgent Priority' for Business, Says Conference Board

The Untapped Potential of Reframing Climate Change Around Water