Why Wells Fargo's cleantech incubator is a hit

Wells Fargo started its Innovation Incubator program four years ago as a way to help clean-technology startups get a foothold in the commercial marketplace, while also helping the bank reach its sustainability goals.

Now, the Denver-based program, IN2, has tripled in size, to $30 million, and is arguably one of the best launchpads for cleantech startups in the United States.

IN2’s secret weapon is its partnership with the National Renewable Energy Lab in Golden, Colorado, where researchers work with selected startups to test and validate their technology and get it ready for primetime.

"There’s no shortage of technology, but the ‘valley of death’ is very real for these companies," said Ashley Grosh, vice president and business initiatives manager of environmental affairs at Wells Fargo. "We can speed up the path to commercialization in a way that is best for the company, without their having to give up equity, while giving them access to NREL and giving them access to a corporate."

There’s no shortage of technology, but the ‘valley of death’ is very real for these companies.

IN2 startups are invited to join, based on referrals from more than 40 channel partners, which include other incubators, such as Greentown Labs, universities such as Stanford, University of California in Berkeley, Davis, San Diego and Irvine, and the federal Advanced Research Projects Agency-Energy.

Participants get a $250,000 grant, most of which goes toward paying NREL researchers to work with each firm on its technology. The startups do not give up any equity in return.

After an IN2 startup goes through the program and NREL validates its technology, Wells Fargo offers up one of its banking branches as the startup’s first commercial customer, to try out the technology and gain experience working with a large corporation.

In addition to spending some philanthropy dollars on helping worthy cleantech startups get their products into the marketplace, Wells Fargo benefits from seeing how new technologies fit in with the company’s existing system, Grosh said.

For startups, it’s a rare and valuable opportunity to take advantage of NREL’s world-class equipment, knowledge and staff of experienced scientists.

"Unlike other accelerators, we’re focused on helping companies develop their technology," said Richard Adams, director of NREL’s Innovation and Entrepreneurship Center. "The lab has 40 years of experience developing renewable energy and energy efficiency technologies, as well as facilities and equipment that a lot of these companies need."

Unlike other accelerators, we’re focused on helping companies develop their technology.

The arrangement has paid off. Since 2014, 20 startups have started the program. In addition to the $250,000 grant that each startup gets, the program has provided a total of $668,000 in follow-on funding. The startups, in turn, have generated $86.5 million in investment or add-on capital beyond what IN2 has provided.

Five companies have tested their technology at Wells Fargo branches, and two successfully have exited the program, including Whisker Labs, a developer of peel-and-stick home energy management technology that tracks appliance efficiency and helps homeowners save on their power bills. Whisker Labs was acquired in 2016 by Earth Networks, a provider of weather and climate information and forecasting. Last year, Earth Networks spun off Whisker Labs into a stand-alone company. 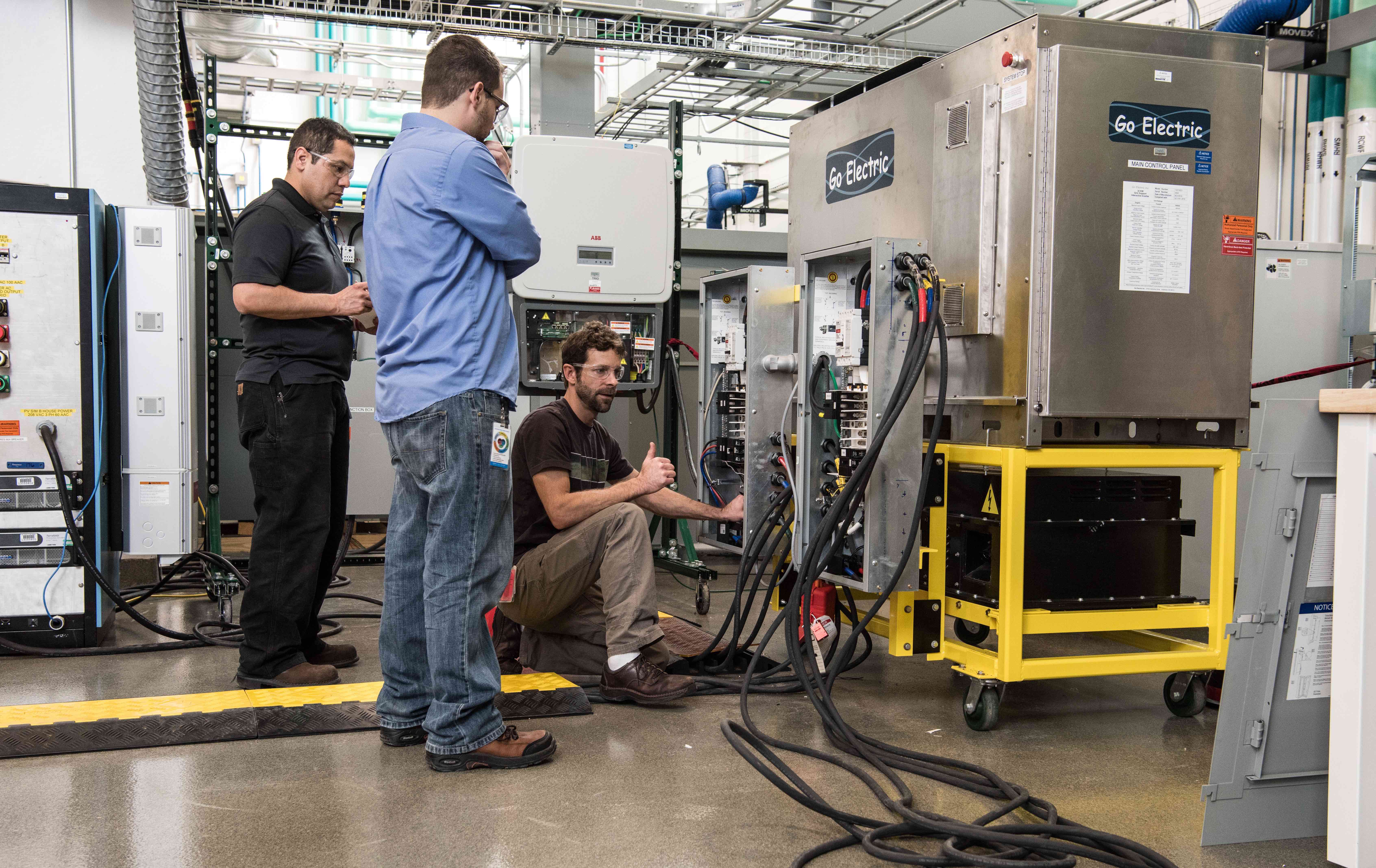 The IN2 program is boosting prospects for Go Electric, a renewable energy microgrid developer that has sold and installed projects for the U.S. Department of Defense, but wants to break into the commercial sector. The Anderson, Indiana-based company recently installed a demonstration microgrid project for Hawaiian Electric, and hopes to sign deals with other corporations after getting NREL’s seal of approval for its proprietary hardware and software.

"Our technology is already in production, but what we didn’t have was a famous lab like NREL validating our technology and saying, ‘These guys have something special,’" said Lisa Laughner, Go Electric’s chief executive.

Our technology is already in production, but what we didn’t have was a famous lab like NREL validating our technology.

A major focus of the IN2 program is "de-risking" the technology, both from a practical standpoint, by making sure it works as intended, and from a market standpoint, testing it in a corporate setting to prove that it is a viable product for other commercial customers.

"By speeding up the commercialization process, we can get to a much more sustainable level of companies succeeding, compared to what the historical venture capital model has provided for," said NREL's Adams.

Having a national lab as a partner makes a huge difference, and is an approach also being used at Cyclotron Road, a fellowship program for tech startups in Berkeley, California, that partners with Berkeley National Lab to help inventors commercialize their technologies so that they can go out to sell them to customers looking for better products.

"Our main mission is to empower scientists to advance their technologies from concept to a viable first product and position them for broad societal impact for the long term," said Matt Price, managing director of partnerships at Cyclotron Road.

Cyclotron Road fellows spend two years embedded at Lawrence Berkeley Lab, where they work with researchers to reduce the technology risk, market risk, and other commercial risks of their innovation, Price said.

One of the program’s graduates, Polyspectra, makes advanced materials for 3-D printing and is working to reduce the amount of energy used in manufacturing.

Some of Cyclotron Road’s corporate partners, which include Shell, Chevron and AutoDesk, are serving or have served as the first commercial customer for a new technology developed in the fellowship program.

Price is working to craft a standard collaboration contract, or joint development agreement, that startups and corporates who want to try out new technology can sign, without having to negotiate basic details, which takes time. The goal is to cut the negotiation process to three months, from 12 to 18 months.

"The more time that goes by, the more money is consumed in that process," Price said. "I come from a venture capital background, and one of the perspectives of the V.C. industry is that technologies take too much time to commercialize to fit the V.C. model.

Our goal is to reduce the time and cost so that venture capital becomes more interested; corporate dollars also could be a funding source.

Back in Colorado, Wells Fargo and NREL are in talks with other corporations that are interested in joining IN2 as sponsors. NREL is also in separate talks with additional companies that want to partner with the lab on an incubator program similar to IN2, but separate, Adams said.

Meanwhile, IN2 is expanding its scope, from building efficiency technologies, to sustainable agriculture, transportation, residential buildings and the food-energy-water nexus.

Wells Fargo is hoping to partner with some of its customers in the agricultural sector to test out a new wave of sustainable ag technologies, Grosh said.

"The customers we’ve previewed are open to this model," she said. "It’s not a cost to them, they get an early look at a new technology. You’re solving problems for both sides, and everyone can benefit from participating, from the investor to the early adopter, to the university that first took on this technology."