Why the world's biggest companies are investing in recycling

Interest in recycling is looping back around.

That’s evident from the launch of the Closed Loop Fund, a budding $100 million effort by a group of large companies to invest in recycling infrastructure and, in the process, put more recycled materials into manufacturing supply chains. Along the way, it aims to give a boost to recycling in the United States at a time when rates are leveling off but the demand for recycled feedstocks is picking up.

Over the past few months, nine companies have invested between $5 million and $10 million each into the fund: Colgate Palmolive, Coca-Cola, Goldman Sachs, Johnson & Johnson, Keurig Green Mountain. PepsiCo and the PepsiCo Foundation, Procter & Gamble, Unilever and Walmart and the Walmart Foundation. More investors are expected to be announced in the next two months.

It was the last of those — Walmart — that played a key role in the fund's launch. In April 2013, the retail giant convened a supply-chain summit, with 30 recycling, consumer product and supply-chain experts, to discuss how to increase recycling in the United States. Nearly everyone cited systemic challenges with the same root cause: a lack of access to capital for cities and recycling firms to invest in the infrastructure needed to increase curbside recycling and materials processing, causing recycling rates to remain unacceptably low, according to Rob Kaplan, Walmart’s director of product sustainability. Out of that meeting came the idea of creating a fund with capital from vested interests, providing cities the financial means to build or expand recycling programs.

This is no philanthropic venture. Despite impressive gains in collecing recycled materials in the U.S. — recycling rates of municipal solid waste have more than doubled since 1990, from 16 percent to 34.5 percent in 2012, according to the most recent U.S. Environmental Protection Agency figures — a lot of valuable materials continue to be wasted. After steep increases in the early 1990s, recycling rates have slowed or leveled off in recent years. Moreover, those EPA rates are skewed by a handful of materials — notably, automotive batteries and tires, of which 96 percent and 44 percent are recycled, respectively, largely due to state regulations. That means the 34.5 percent overall figure overstates the recycling rates for aluminum, glass and plastic.

That represents a massive business opportunity, according a 2012 report from As You Sow: nearly $11.5 billion of wasted packaging a year, a rich lode of potential manufacturing feedstocks, often at prices below their virgin counterparts and with reduced environmental impacts. More than 70 percent of that value is in plastics, which can be among the less profitable materials to collect and recycle.

Still, according to As You Sow:

The firms that process metals, paper, electronics, rubber, plastic, glass and textiles generate 137,000 direct jobs and $32 billion in revenue. When suppliers and indirect impact are factored in, the industry supports nearly half a million jobs and generates a total of $90 billion annually in economic activity. A recent Container Recycling Institute study concluded that beverage container recycling creates more jobs than disposal and that jobs gained in recycling far outweigh jobs lost in extraction of virgin materials, landfilling, or domestic manufacturing. A 75 percent national recycling rate could add nearly 1.5 million new jobs in this industry by 2030, according to a recent report prepared for the Blue Green Alliance and a coalition of labor and environmental groups. The report said this level of recycling would also reduce CO2 emissions by 276 million metric tons by 2030 (equivalent to eliminating emissions from 72 coal-fired power plants), reduce conventional and toxic emissions that impact human and ecosystem health and generate a stronger economy by creating a broader employment base.

As part of Walmart’s pledge to eliminate 20 million metric tons of greenhouse gas emissions by the end of 2015, the company built a strategy to increase the amount of recycled content in plastic packaging and products. “Anytime we do that, we reduce greenhouse gases and save costs because it’s less expensive to re-refine plastics compared to extracting virgin petroleum from the ground,” says Kaplan. “However, there are inefficiencies in the system that don’t always allow those economics to work.” 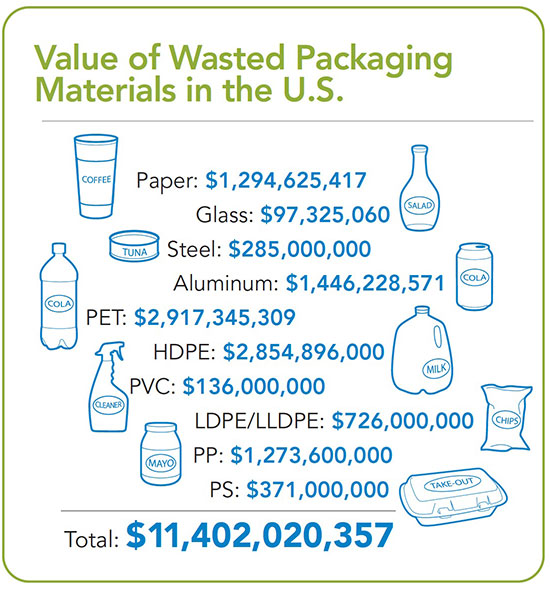 Enter the Closed Loop Fund. It aims to provide municipalities with zero-interest loans and private firms engaged in public-private partnerships with below-market interest rates in order to spur investments in municipal recycling programs.

“The problem is that cities, unlike Walmart, don’t have the up‑front capital to invest in the infrastructure, whether it be carts or a recycling facility, or to upgrade their recycling facilities to make them more advanced,” Ron Gonen, the fund’s co-founder and managing partner, told me recently. “You solve that by making the capital available to municipalities. And the good thing about that is that you’re actually unlocking a lot of value, so you don’t need to do grants. You can actually do this in the form of a zero-interest or low-interest loan, because you’ll be unlocking capital that they can then use to pay you back."

Some of the money may be used to purchase advanced technology that can divert more waste to recyclign markets. Take, for example, optical sorters, a technology that can visually detect different types of materials. “One challenge we heard at our first meeting is that the current optical sorting technology can’t recognize anything that’s black,” says Gonen. “So any [bottle] caps that are black, for instance, end up going to a landfill because the recycling technology can’t recognize it currently. Nobody on the consumer goods side was aware of that until we had our first investor meeting and brought in the recycling companies.” 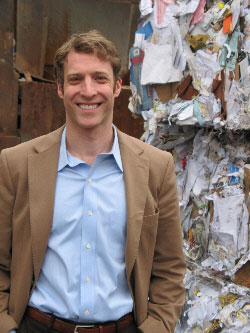 The idea of the fund is not just to invest $100 million once the full amount is raised — just over half has been committed so far — but to use that sum to leverage additional investments, says Gonen, who previously co-founded RecycleBank and served as Deputy Commissioner for Recycling and Sustainability for former New York Mayor Michael Bloomberg. “When we think of $100 million, we look at it as potentially unlocking $300 million or half a billion dollars.” Gonen says the fund already has received interest from the New York Green Bank and a similar one in Connecticut, funds that operate locally to expand capital to grow clean energy and other technologies. He estimates that the amount required to create the needed recycling infrastructure in the U.S. is in the neighborhood of $1 billion, so his fund’s leveraging power could put a significant dent in that.

There’s additional leverage potential, says Gonen. “What we’re hoping to do with the few hundred million that we put to work is solve this for a large portion of the country, but also create models that are scalable and replicable so municipalities can invest their own capital based on that model.” One big challenge, he says, is in semi-rural parts of the country, which typically lack a recycling infrastructure or curbside recycling. He believes the fund could finance solutions that could be replicated around the country.

I asked Gonen whether his corporate investors might play favorites — that Walmart, for example, might insist that investments be made in northwest Arkansas, near its headquarters, or Johnson & Johnson near its base in New Brunswick, N.J. That is, could investor pressure result in money flowing to where it’s popular but not necessarily needed?

“To take your question even further, there’s location and there’s types of material,” Gonen responded. “We have some people around the table that care deeply about certain regions of the country. We also have certain folks around the table that care deeply about PET or aluminum. And I think what everyone has come to understand over the last decade of trying to solve their specific problem in a region or a material type is the only way you get that solved is by solving the actual infrastructure problem in toto. Because nobody just recycles PET. Nobody just recycles aluminum. They need a curbside program.”

Moreover, he explained, the due diligence structure for the fund has been created to mitigate investor favoritism. The management team of the fund will review city applications. Those that pass muster will go to an advisory board, made up of the companies. They will provide input, but final approval for the project will be done by an independent investment committee made up of people in finance, environment, recycling and municipal management. The fund's typical investment is expected to be in the $5 million range, with an average seven-year payback. The goal is to return all principal and interest to investors in 10 years.

The return on investment won’t be high, since some of the loans will be interest-free, but that’s not the primary concern of the companies writing multi-million-dollar checks. Says Walmart’s Kaplan: “As recycling rates increase, we expect access to recycled content to increase for our suppliers and for costs to come down for the entire supply chain, ensuring we can offer our customers the everyday low prices that they expect. Of course, more local jobs in the recycling sector in the communities where we do business will be an important benefit as well.”

Gonen is preparing for an event on October 20, where he plans to announce the closing of the fundraising portion of the project. He anticipates making the fund’s initial investments in the first quarter of 2015.