Will SASB succeed in putting nonfinancial reporting on the map?

Editor’s note: This is the second in a two-part series about the use of SASB standards as a safe legal harbor for U.S. public companies.

The Sustainability Accounting Standards Board is more than halfway through its initial standards setting process. It has received American National Standards Institute accreditation as a standards-setting body. It boasts big names on its board and has created a “social norm” that will encourage many publicly traded U.S. companies to consider its guidance when making disclosure decisions.

So, what happens next? Will SASB succeed in building a safe harbor for nonfinancial disclosure? If so, what will this mean to the rest of the metrics area?

There are two ways for SASB to succeed. First, if a modest fraction — 10 percent to 20 percent of the country’s roughly 30,000 public companies — start conforming to the SASB standard, its issues will become de facto standards. 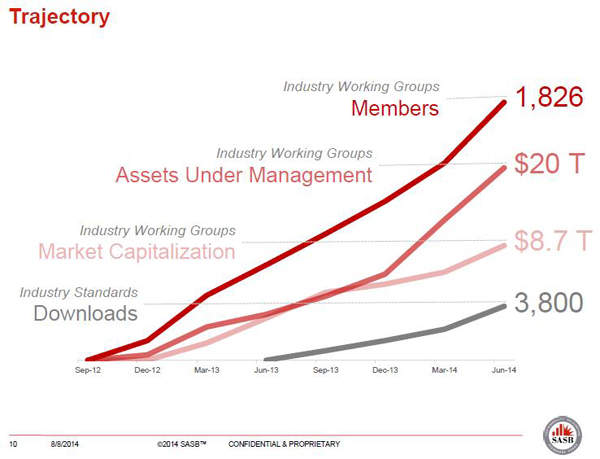 Second, a shareholder might file a lawsuit against a major company over the accuracy or quality of its nonfinancial reporting. The company could claim that it conformed to SASB standards and therefore should not be blamed for any omissions or deviations, or the plaintiffs could win because a company failed to follow SASB.

The long view on metrics

Investors, for example, will get better quality data. Investors have supported SASB because they want uniform, well-described sets of data across all companies within an industry. These data sets could appeal to mainstream investors who had not previously incorporated sustainability factors into decision-making. Note that investors who already include sustainability in their thinking may find it harder to get an edge over competitors.

Another plus: Metrics suppliers that rely on assessments by human analysts should continue to be in demand. For instance, environment, social and governance research firms, such as MSCI, Thomson Reuters, EIRIS, Vigeo and Trucost, should be able to dig out facts and form opinions that go beyond what companies report under SASB.

In addition, government agencies, including the SEC, should be encouraged to press for data to suit their own agendas. There are already requirements to disclose greenhouse gas emissions and use of conflict minerals. Other agencies may decide to impose their own “unfunded mandate” and justify it as similar to SASB’s work.

Finally, SASB will stay ahead of emerging risks. It updates its standards, as needed, to reflect new issues that are likely to be material. SASB flags emerging issues for each industry it reviews. These are issues that do not yet have sufficient evidence of financial impact or investor interest, but might become material given impending regulation or other developments. Each time SASB reviews its standards, it asks its working groups to consider if these issues have reached the threshold of materiality. As a result, I expect to see a steady increase in the scope of SASB’s standards.

With success could also come some issues. Companies, for example, could reject more requests for information from outside stakeholders. Even if the sustainability folks in a company want to fill out a survey or publish a press release, both the company’s in-house lawyers and auditors may object. But I doubt that companies will shut down their sustainability area or stop measuring and reporting sustainability factors.

Also, groups that rely primarily on surveys may get lower responses rates. For instance, companies may be less willing than in the past to complete Robeco’s extensive Dow Jones Sustainability Index questionnaire. Nonfinancial stakeholder groups, such as supply chain auditors, NGOs and government agencies, also may see lower response rates when they ask for information. Metrics users may have to rely more heavily than in the past on crowdsources that pull data from individuals and other anonymous sources.

Software providers may not generate much revenue from integrating SASB reporting into their tools.  Each industry has only eight to 12 issues to track, and the methods for measuring each have been well defined. This may make a new SASB reporting module a “giveaway” item that will be bundled into broader suites of more internally focused sustainability measurement and reporting tools.

Standardization might reduce innovation. Given that SASB’s working groups tend to choose issues that are already well understood and widely reported, SASB’s issues are backward-looking and “conservative.” SASB, however, has attempted to avoid this risk by explicitly including innovation in business models as one of its objectives.

SASB’s approach is industry-centered rather than issue-centered. Outside stakeholder groups, such as Climate Counts or Transparency.org, examine the reported policies and performance of the companies they cover. Their measurements cross industry and geography boundaries. They look for good or bad performance, relative to an absolute standard of behavior. In contrast, each industry within a SASB industry group decides its own list of issues that are likely to be material. It defines how it will report data on these issues and one industry could report an issue differently from the way another industry reports it.

Finally, companies may issue fewer separate CSR reports. Legal and auditor pressure may curtail the information companies release on the CSR area of their corporate websites. About 45 percent of the 9,296 companies we track have a CSR area on their website. Companies could instead focus an excessive amount of attention on the issues that SASB’s standards cover. Both these changes would reduce the amount of “primary” information available to those of us interested in company sustainability performance.

On balance, the downsides of SASB’s success seem to be outweighed by the benefits. Many companies will appreciate the reduction of risk and costs that a SASB regime may create.

Should we stay put or sail back into the storm?

SASB’s success could disrupt many aspects of sustainability reporting. A few changes it prompts may not be positive, and a focus on SASB-related issues could inhibit or reduce the release of data that is important to noninvestor stakeholders.

SASB seems likely to drive more than U.S. nonfinancial reporting. Foreign groups carefully will examine SASB’s standards. Many who download SASB standards are outside the U.S. Large foreign companies with securities that trade in the U.S. are subject to U.S. security law. Groups such as the World Federation of Exchanges may decide that SASB standards are akin to Generally Accepted Accounting Principles for nonfinancial reporting, and mandate conformance to SASB for the companies they list. As they do this, SASB’s influence quickly could spread beyond the confines of the U.S. market and penetrate into reporting for public companies in other world markets and private companies. 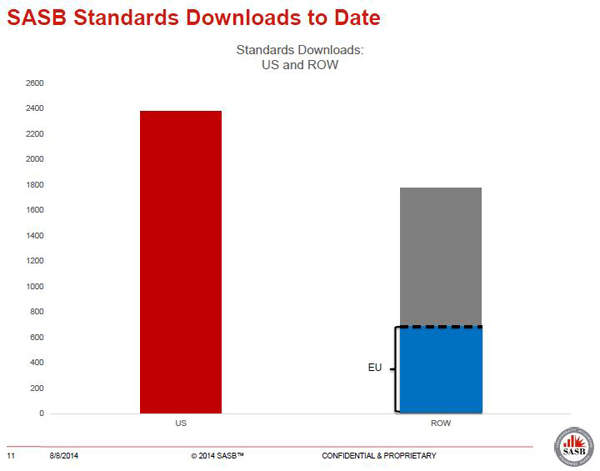 SASB has created a safe harbor in which I expect to see many of corporate America’s “boats” moor soon. But to move corporate reporting forward, we need to find ways to brave the storms and reach distant, more sustainable shores.

I believe that outside groups will continue to push for broad disclosures that cross industry and geographic boundaries and for specific data on each company’s social performance. I also believe that corporate sustainability managers will continue to push for internal reporting and metrics that go far beyond what SASB requires. To sail the ocean, we need both harbors and maps for finding them.  There is still a lot of open ocean for us to explore.

Why sustainability reporting is all over the map

Why SASB is a game changer for sustainable business