VERGE 22 attendees share their insights on climate, innovation and change in the transportation industry.

What a week! VERGE 22 is officially behind us, and I have a lot to ponder as I accelerate my work forward. After all, VERGE is about accelerating solutions to the most pressing challenges of our time.

Over the years, I have often rolled my eyes at a different narrative, all too common in the climate and sustainability event space, that paints a single event or gathering as the beginning point for climate action instead of the conduit for accelerating it. Yes, the former still happens in 2022, and we all know the ones that do it. Such language, some less in your face than others, suggests that companies, governments and individuals have done nothing to address climate until that single gathering, and now that it's over, the "real work can begin."

However, such a representation ignores and diminishes the work that has been done. It also discredits the very gathering itself, representing it as just surface level and punting to next year, after having "begun the hard work."

Now, without question, a mind-boggling amount of work still needs to be done to reach net zero by 2050, and no one company, government or person holds the answers to every solution to get us there. Of course, greenwashing also still exists, and many challenges lie ahead, including how fast we can decarbonize hard-to-abate sectors such as steel and manufacturing. But we are making progress, albeit in some areas more than others. The International Energy Agency recently released a new estimate showing global CO2 emissions from fossil fuels are only projected to rise by just under 1 percent this year, in part due to major deployments of renewable energy and electric vehicles (EVs). That is far less than the 6 percent that experts feared would be the case.

Therefore, if I reflect on where the climate and sustainability industry was 10, 15, or even 20 years ago — heck, let alone two to three years ago — I find it harder to be completely pessimistic about the future. If you have been working in this space, or have followed it for some time, take a second and think back to yourself five to 10 years ago. What would your younger self say to the following headline and two visuals recently published by Bloomberg?

(From "Clean Energy Has a Tipping Point, and 87 Countries Have Reached It") 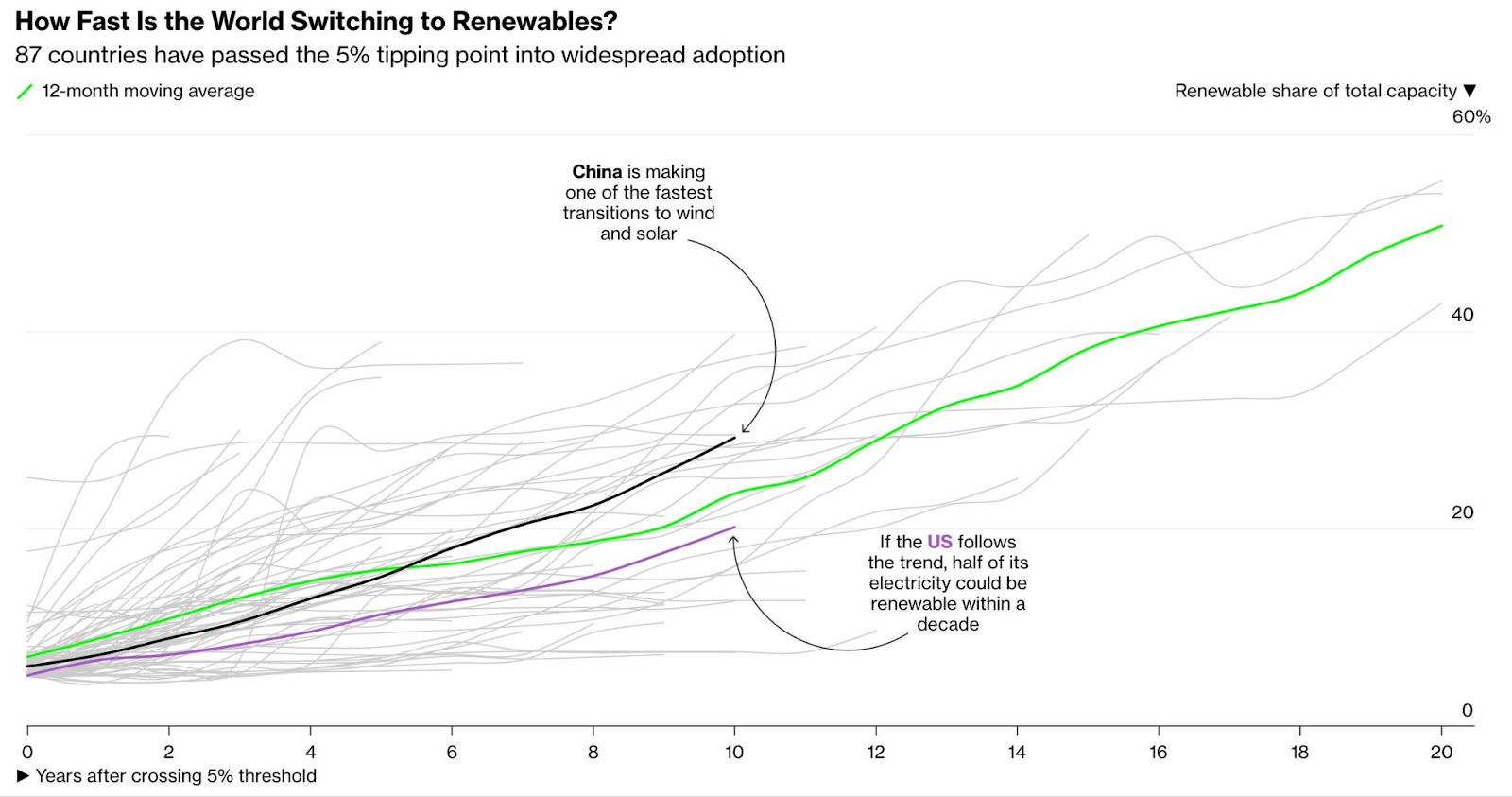 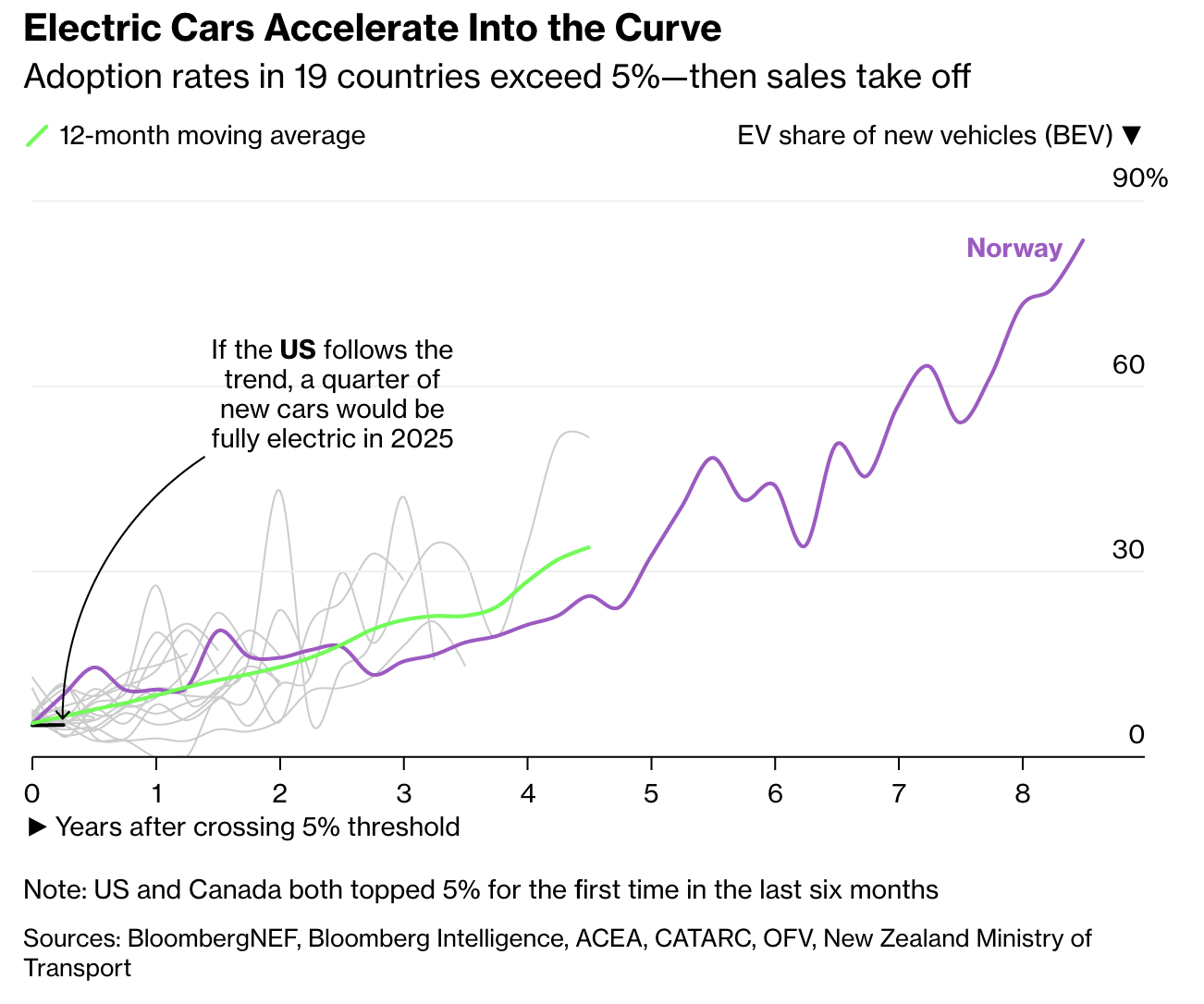 My younger self would be impressed by the interest in and scale of global EV adoption, especially by company fleets. However, I would also be discontent, knowing we could go faster.

See, for the longest time, and sometimes here and there still, I had a constant pessimistic outlook on the state of the climate. My fears, which are still legitimate for the world we live in today as climate change rears its ugly head more frequently, held me back from seeing the complete picture, and in the end, understanding where to fill the gaps and offer the most impact. Sort of like a black hole, sucking in all possible light. In this case, fear was the black hole not letting any light escape — a.k.a. positive climate action. I know, classic glass half-full vs. half-empty thought process.

Fear is a motivator, but it only motivates you so far until the pressure of it weighs you down and cripples you in your steps. Fear as a motivator is why the general public, who is not as in the weeds as industry professionals are, often roll their eyes and minimize the risks of climate change. Without having all the solutions ready and available, relying on fear to motivate action will not work.

VERGE 22 channeled an underlying discontent that 'we' as an industry and as individuals can do more.

Instead, a famous quote from Thomas Edison best captures my thinking, and I feel it also perfectly aligns with VERGE — "Discontent is the first necessity of progress." Applied to climate impact, such a mindset celebrates all that we have accomplished on climate without becoming complacent.

The understanding that "discontent is the first necessity of progress" was evident throughout VERGE 22 this year. Discontent was the motivator, not fear. A collective feeling, and an understanding, that we hold the future in our hands, we have done many impressive things together up until this point, but we can and need to go faster, and we need to keep doing it together.

VERGE 22 channeled an underlying discontent that "we" as an industry and as individuals can do more. To help us all, VERGE equipped us with new tools and knowledge to go faster together. Where else could you listen to a keynote session by Sweta Chakraborty, president of We Don’t Have Time, talk about the psychology and behavioral science behind accelerating climate action — which if you haven’t watched yet, please watch here — and also participate in deep and honest conversations on how to improve public EV charging reliability and access with leadership from companies such as BMW, Tesla, ABB and Electrify America?

But don't just take my word for it. I decided to share Edison's quote at VERGE 22, and caught up with several transport industry colleagues during the three days to hear what they had to say about the following two questions. The answers were quite inspiring:

Maryline Lewett, director of business development, transformative technologies, Black & Veatch: "Discontent means there is room for progress, therefore, it's an incentive for me to do better, my company to do better and the whole technology and EV industry, everybody, to do better. That's how I see it."

Alexia Melendez Martineau, policy manager, Plug In America: "Absolutely, absolutely discontent causes progress. When you look at every civil rights movement in this country, in other countries, they come from that one source of what is wrong. And that one source can bring us all together. And in this scenario, the climate [crisis] scenario, we have a unique factor that's pushing discontent with the climate crisis. And unfortunately, what that means is that all of us have a reason to do something together."

Erika Myers, executive director, CharIN North America: "Discontent is an acknowledgment that the system is broken and that we must as an individual and collectively act towards a solution to fix the broken system. … So you work until the end, until it’s done."

Jigar Shah, energy services, Electrify America: "Discontent with the status quo of relying on fossil fuels for mobility is at the heart of Electrify America’s mission to electrify the transportation sector and address climate change. How? Our charging network delivered 1.4 GWh to drivers in 2021 — avoiding the estimated use of 5.7 million gallons of gasoline and enabling over 145 million EV miles."

Badalian: Apply Edison’s quote to your work now and decarbonizing transport. Also, what does VERGE mean to you?

Pam Fletcher, chief sustainability officer, Delta: "So I am a true believer that there is a solution to every problem. It's just how big can you think. … I think it's people that think like that, that will ultimately solve some of the biggest challenges out there in the world. This event is full of people with a lot of discontent, and I think the real ambition here should be to get them all into action."

Asaf Nagler, vice president, external affairs, ABB E-mobility: "I think the value of discontent is it really helps you focus on the solution and gives you a sense of purpose and mission in the coming year. VERGE helps us tease out what some of those issues are, so that we can be invigorated to go back out there in the world and try to work on those issues."

Rima Kasia Oueid, commercialization executive/senior energy finance and policy adviser, U.S. Department of Energy: "Discontent is definitely a motivator. But you can't ignore the power of inspiration. Discontent implies that something has to be bad, that we have to be uncomfortable in order to be motivated to change. But discontent can also be something that emerged because you were inspired, saw a better way, and you crave it. And then, the status quo which was comfortable causes discomfort. And so what we need to do is educate people and inspire them by giving them a vision for a better way. However, people must be open to learning new information, even if it is at first counterintuitive."

[On VERGE] "To me personally, having experienced VERGE for the first time, I've seen people have healthy debate and that is so important because we too often surround ourselves in a camp that only agrees with us which leads to complacency, or worse, counterproductive dogma."

Badalian: What does VERGE mean to you?

Josh Green, founder and CEO, Inspiration Mobility: "It has been really inspiring to me to see how big the event is in the number of people here that had no interest in climate before. I've talked to so many people who are here for either the first time, or the second time. As an example, I had dinner last night with 10 different people, and I'd say three of us have been in this industry, everyone else at the table was like, 'Yeah, I was working in crypto, and it just occurred to me that this is an urgent problem and so I should really devote my career to that.' So it's been really inspiring to see that mix of realization and passion at this event."

John Boesel, president and CEO, CALSTART Inc.: "VERGE plays a special role in connecting companies that have the products to decarbonize with the companies and government agencies that are working on the right efforts and that want to move ahead to decarbonize. So it's a really good place where the folks that have the solutions are coming together with those who can buy or mandate the solutions."

Jeremy Devray-Benichou, director of customer services, WeDriveU: "... VERGE for us is really about not reinventing the wheel, and just moving faster and accelerating the adoption of EVs by being stronger together with a bunch of other very smart people."

See all by Vartan Badalian