Despite recent progress, solar power accounts today for about 1 percent of the world’s energy mix. Yet the International Energy Agency says that solar energy, most of it generated by decentralized “rooftop” photovoltaic systems, well could become the world’s single biggest source of electricity by mid-century.

So how do we get from here to there?

The answer, according to scientists and engineers, lies in a new generation of super-efficient, low-cost sunlight harvesters that take up where the recent flood of cheap silicon panels leaves off. New designs and novel solar materials recently have been setting new efficiency records seemingly every week. Although research and development of solar power still falls far short of where scientists and engineers say it needs to be, innovators are making steady progress in creating a new generation of materials that can harvest the sun’s energy far more efficiently than traditional silicon photovoltaic cells.

Among the most promising technologies are multi-junction cells with layers of light-harvesters that each gather energy from a separate slice of the solar spectrum, super-efficient semiconductor materials such as perovskite and gallium-arsenide, and cells made with tiny but powerful solar-absorbing “quantum dots.” Technical hurdles, such as making new materials able to withstand the elements, remain. Nonetheless, researchers say, efforts now underway could begin to dramatically increase solar power generation within a decade or two.

Boosting the efficiency of solar cells is fundamental to increasing the sun’s role in the global energy supply. Current commercial photovoltaic cells have lots of room for improvement. The vast majority of solar panels on the market today use crystalline silicon cells able to convert on average only around 16 percent of sunlight into electricity. Most of the rest are cadmium-telluride (Cd-Te) or copper-indium-gallium-selenide (CIGS) thin-films, with efficiencies in the range of 12 to 15 percent. So squeezing more juice from rooftop panels — scientists say some new approaches could reach up to 50 percent efficiency — will make solar power increasingly affordable.

Solar’s evolution over the past decade has been stunning, as falling prices and climbing demand drew photovoltaic costs level with, or below, power sources such as coal and even natural gas in some places. The change is so major it has upped expectations for the sun’s role in a clean energy future; the IEA recently raised its targets for solar electricity in 2050 by nearly 50 percent. The U.S. Department of Energy’s SunShot Vision Study projects solar will provide 14 percent of American electricity by 2030. 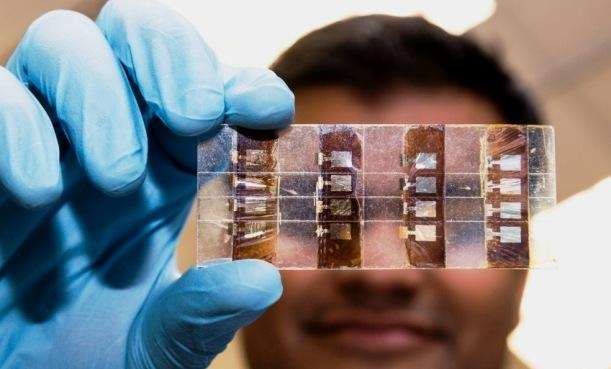 One new technology in particular has scientists voicing unusual enthusiasm — perovskites, a class of minerals with a salt-like crystalline structure that are easy to build, are made from inexpensive ingredients such as lead and ammonia, and are becoming increasingly efficient at converting sunlight to electricity.

“Everybody around the world is extremely excited about this,” said Jao van de Lagemaat, director of the Chemical and Materials Science Center at the U.S. Department of Energy’s National Renewable Energy Laboratory in Golden, Colo. “The efficiency of solar cells made from this material has been climbing more rapidly than anything else that we’ve seen before. … I don’t know where it stops yet.”

First used in a solar cell in 2009, perovskite only began to draw wide research interest in 2012. Since then, the material’s quality has surged, and its light-into-energy figures have taken off.

Indeed, the numbers are still climbing. The latest confirmed efficiency is more than 20 percent, with unofficial reports of 24 percent.

One of perovskite’s big attractions is that it is produced from low-temperature liquid solution, in contrast to the energy-intensive, high-heat methods for growing silicon crystals and other solar cell materials. What’s more, it can be “painted” onto thin, flexible substrates such as plastic, a process van de Lagemaat likened to manufacturing photographic film. The applications for light, bendable and inexpensive perovskite solar panels are enormous, he said.

Perovskite has one major drawback, however: the crystals break down in humid conditions. That’s a big problem for something installed outdoors.

McGehee and others are looking at alternative elements that may create a more stable compound. In addition, he’s layering perovskite onto silicon, in an effort to build hybrid “tandem cells” with amped efficiency at little extra cost. Although the material has great possibilities, he estimates it will take at least a decade to iron out perovskite’s problems, if it can be done at all.

“This is long-term, high-risk research,” McGehee said. “And it may work, it may not.” Gallium-arsenide solar array designed by NASA for the Dawn spacecraft.

Eli Yablonovitch, a professor in the Electrical Engineering and Computer Sciences Department at the University of California, Berkeley, is developing high-performance cells with multiple semiconductor layers. Each is “tuned” to absorb different light wavelengths. By splitting the solar spectrum into separate colors, these “multi-junction” cells maximize the harvest for each — even reaping energy from non-visible, infrared frequencies.

Yablonovitch, who began working on photovoltaic cells as a researcher at Exxon in 1979, says silicon is “outdated technology.” New materials such as gallium-arsenide “absorb maybe a thousand times more strongly than silicon,” he said. “And they can be exceptionally thin.”

New materials and designs potentially can break a fundamental limit — the so-called “band gap” — to the portion of the light spectrum that silicon can convert into current. Photons with energies below the band gap don’t get absorbed, while those above it essentially turn into heat. Unlike silicon, the new compounds’ chemistry can be altered to adjust the band gap and harness the maximum numbers of photons.

“Beyond 30, the hurdle is to find the proper way to split the solar spectrum into pieces, and that is being very actively researched,” Yablonovitch said. “I’ve been telling people for some time, ‘If you’re doing research, it should be between 30 and 50 percent efficiency.’”

The material is expensive, however, and adding layers is complex and costly. Multi-junction cells are so pricey that for now, use is limited to specialized applications such as satellites. But Yablonovitch is convinced that if production were scaled up, prices would fall. He’s seen it happen before. “When I started [with] solar 35 years ago… the prices of the panels were 100 times greater than they are today,” he said. 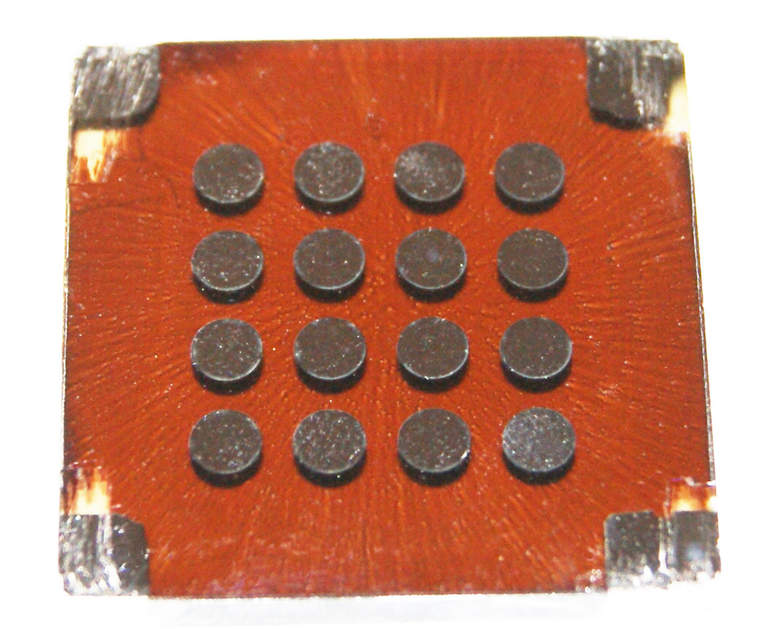 Lukasz Brzozowski
Spin-cast quantum dot solar cell built by the Sargent Group at the University of Toronto. The metal disks on the front surface are the electrical connections to the layers below.
“That third of energy — that’s a huge chunk you’re throwing away,” said Matthew Beard, an NREL senior scientist collaborating on developing quantum dots at Los Alamos National Laboratory’s Center for Advanced Solar Photophysics. Quantum dots could boost efficiencies into the range of multi-junction cells for much lower cost, he said.

Assembling the dots into a cell, however, requires a “whole other level of chemistry,” and scientists are still working on how to do that. The current top efficiency is a fairly dismal 8.6 percent. “But the encouraging thing is that there is progress,” Beard said. “We started out at 2 or 3 percent in 2009, and now we’re at close to 9.” Theoretically, solar cells with a single quantum dot layer could convert up to 45 percent of the sun’s energy into electricity, he said.

Even silicon is reaching for a bigger piece of the sun. California-based rooftop panel manufacturer SunPower just announced it will begin mass-producing silicon cells with 25 percent efficiency — just a point below the element’s practical maximum — for the home solar market in 2017. The efficiency gains come via recipe changes that improve the material’s ability to carry charges. Design tweaks also allow more light into the front of the cell.

While the new panels initially will cost more than current models, the increased output will make electricity cheaper in the end, said SunPower CEO Tom Werner. “We expect it to have a meaningful downward impact on pricing over time,” he said.

These are just some prospects for increasingly efficient photovoltaics in a field studded with big new ideas, such as repurposing Blu-ray discs into light absorbers or “solar paint” embedded with tiny, light-harvesting particles that turn walls into photovoltaic panels.

Overall, solar innovation is being held back by the low priority countries place on clean energy research and development, according to the IEA. The agency reports that on average, governments in developed countries spend at least six times more on defense research than on energy research. Promising technologies also falter for lack of commercial interest, researchers say.

“The only way this becomes a product is if companies also see it as a benefit, and see the future of it and start investing,” Beard said of his quantum dots. “Just our little research effort is not going to take this and make it a product.”

“Very few states have high-quality solar programs,” he said. “The most successful programs in Europe have found ways to incentivize solar at the household level or at the small business level.” Incentives such as so-called feed-in tariffs, for example, allow rooftop-system owners to sell electricity back to the grid at favorable rates. California, New Jersey and New York have some programs, said Kammen, “but it’s just here and there.”

In the U.S., a national tax credit for home solar and other renewable energy installation is set to expire at the end of 2016. If the incoming Congress doesn’t renew it, that also could deal a blow to solar energy development.

Even without new, breakthrough technologies, however, Kammen projects that solar power will continue to rise. His studies put it on track to provide a third of all energy generated in places like the western U.S. by 2050. “That means that solar would be bigger than natural gas is today,” he said. “So that’s a really big change.”

Nonetheless, “It’s important to maintain attention on both deployment and innovation,” Kammen said. “We do need to see continued innovation.”