With the world’s land-walking population projected to climb to 9 billion people by mid-century, the oceans and their bounty of fish are on the hook for supporting growing global appetites.

The marine world currently provides 20 percent of the world’s food. Due to demand that already has risen sharply, unsustainable fishing practices and climate change, nearly 90 percent of seafood species are over-fished. 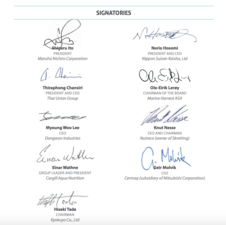 With the new effort, members of the Seafood Business for Ocean Stewardship (SeaBOS) initiative convened during the United Nations Ocean Conference in New York in early June, followed through on the work commenced in November at the so-called "Keystone Dialogues" in the Maldives.

The nine companies, with revenues of about $30 billion, are known as "keystone actors" because they are among the 13 corporations controlling up to 16 percent of global marine catch and up to 40 percent of largest and most valuable seafood stocks. Taken together, these companies "have a disproportionate influence on the health of the oceans," according to academic journal PLOS ONE.

A pledge and a plea

At the heart of the new effort, which follows several high-profile reports on environmental and labor abuses in the global seafood supply chains, is a new professed commitment to longer-term preservation of the world's oceans.

"Well managed fisheries and aquaculture, produced in resilient ecosystems, result in healthy and sustainable protein supplies," a statement from the companies noted. "There is no seafood industry in a dead ocean."

Specifically, the nine seafood suppliers involved have pledged to:

In return, they ask for "adequate regulations and best practices [that] are critical for sustaining and expanding future seafood production in ways that contribute to meeting the SDGs."

Specifically, they want governance of oceans and coastal areas, reduced pollution from farming into coastal waters, elimination of plastic and pollutants from coastal waters and for greenhouse gas emissions to peak by 2020, aligning with the goals of the Paris Agreement.

The June oceans conference was the first time that otherwise competitor seafood companies from Asia, Europe and the U.S. came together to create concrete commitments to meet SDG Goal 14 and pressure politicians to set the stage.

A tangled net of challenges

Research published in the National Academy of Sciences has found that “applying sound management reforms to global fisheries [...] could generate annual increases exceeding 16 million metric tons (MMT) in catch, $53 billion in profit and 619 MMT in biomass relative to business as usual," all within a decade.

Valuing long-term sustainable economic value, the research said, can increase product prices because of better quality and market timing. It also could increase product: The U.N. Food and Agriculture Organization found that proper fisheries management could increase catch by 16 million tons annually by 2050.

However, fisheries have been doing dismally on the sustainability front: In 2016, Greenpeace gave only three seafood contractors out of 15 passing marks for sustainability. Thai Union Group also has been called out for lax supplier rules.

The nine companies, with revenues of about $30 billion, are known as 'keystone actors' because they are among the 13 corporations controlling up to 16 percent of global marine catch.

SeaBOS hopes to close loopholes in the fishing supply-chain network that have allowed illegal and unreported fishing activities to bloom like algae. Unregulated fishing may comprise one in five fish eaten and creates losses of $23.5 billion annually.

More seriously, unregulated seafood supply chains are wrought with human rights violations, forced migrant labor and other forms of slavery carried out (largely) in Asia to create products that wind up on Western shelves.

Aquaculture, or farmed fish, seems a promising response to dwindling wild catch and a possible solution to the violence within seafood supply chains. Yet the $160 billion aquaculture industry, which is outgrowing any other food production system, struggles with dependence on wild fish used for feed, heavy water use, disease, and fertilizer and antibiotics overuse.

SeaBOS will report how these challenges are being met when the cohort meets again in 2018.

Another non-binding declaration signed in the June forum is the Tuna 2020 Traceability Declaration, headed by the World Economic Forum (WEF).

The declaration is endorsed by over 60 retailers, including tuna processors, marketers, traders and harvesters, featuring names such as Marks & Spencer, Bumble Bee Seafoods and Starkist. They are joined by six island nations and nearly 20 nonprofits such as the World Wildlife Fund.

Tuna is the second-most popular type of seafood consumed by Americans, with an estimated end-product value of over $40 billion, according to the WEF. Species of skipjack, albacore, bigeye, yellowfin and bluefin tuna — itself a keystone predator — support artisanal and industrial fishing in both tropical and temperate waters.

If, like at the end of Hemingway’s classic "The Old Man and the Sea," the world’s fisheries use these pledges to attain humility and carry no loss of pride, the oceans may provide a sound source of nutrition for future generations.