It’s been eight years since a public–private partnership — the Lake Erie Energy Development Corp. (LEEDCo) — was formed in northern Ohio to attract an offshore wind energy developer to the North American Great Lakes. In some ways, 2009 and the following couple of years formed a pinnacle of excitement around offshore wind in the Great Lakes.

In Michigan, the governor-appointed Great Lakes Wind Council drafted model legislation for permitting, leasing and siting potential projects intended to be shared with other Great Lakes states. Illinois lawmakers established a similar council to study offshore wind potential. Canada was brought into the fold through the Great Lakes Commission — a compact between the U.S. and Canada established in 1955 — and signed agreements with developers to pursue projects in Lake Ontario. New York, too, issued a request for proposals in late 2009 hoping to develop at least 120 megawatts of wind generation capacity within seven years in lakes Erie or Ontario.

Since then, a series of events has led to the steady drop in interest in offshore wind in the Great Lakes. In Michigan, the policy momentum came to a halt after the 2010 election created a state government less aggressive in getting offshore wind up and running. Declining costs made onshore wind energy the approach of choice for meeting renewable energy portfolio standards. The economic downturn and need for government subsidies doomed plans along the north shore of New York. And the province of Ontario established a moratorium on offshore wind to allow time for further study.

Today, however, the tide could be turning again. Eight miles north of Cleveland in Lake Erie, the Icebreaker Wind project is poised to become the first offshore wind project in the Great Lakes. The project, lured by LEEDCo, is owned by Icebreaker Wind Power through the Norway-based investor Fred. Olsen Renewables. Pending federal and state approval, developers anticipate construction will begin in 2020 on the six-turbine, 20.7 MW project.

Some renewable energy advocates hope Icebreaker will catalyze further Great Lakes offshore wind development by settling economic, environmental and regulatory concerns. Skeptics fear it could be a one-off demonstration that is unlikely to be scaled up. And opponents such as the North American Platform Against Wind Power and others with concerns about aesthetics, renewable energy or potential impacts on wildlife worry it will lead to a flood of projects throughout the region.

However it ends up, the project could play a big part in whether the Great Lakes become a focal point for offshore wind in the future. "Once someone does something, everyone says, 'I can do that,'" said LEEDCo president Lorry Wagner.

State officials in Michigan under the administration of Gov. Jennifer Granholm were key players in generating interest in Great Lakes offshore wind. Granholm was term-limited out of office at the end of 2010, replaced by Rick Snyder. Stanley "Skip" Pruss was director of the Michigan Department of Energy, Labor & Economic Growth under Granholm and chairman of the Great Lakes Wind Council, which was created in 2009 and completed its work in 2010.

"I firmly believe offshore wind in the Great Lakes is inevitable," Pruss said. "But I do think it’s a ways away."

Pruss said he and other offshore wind advocates "were a little naive" around 2009 when a $3 billion to $4 billion proposal surfaced for a large-scale project on the eastern shore of Lake Michigan. That project, which called for 100 to 200 turbines spanning 100 square miles relatively close to the shoreline, sparked strong opposition from local residents.

At the time, state officials were trying to build consensus around ways to develop offshore wind, while the developer was adamant about getting a project off the ground, Pruss said.

"It caused a lot of problems," Pruss said of the proposal. "We were trying to develop model legislation for Great Lakes states for permitting offshore wind, and that was upsetting our efforts and interfering with public outreach."

Sooner or later, someone is going to realize the potential in Lake Michigan and get out there and do it.

Pruss said the U.S. Department of Energy (DOE) had a "very robust offshore wind program" at the time "aimed at breaking down both the hard barriers and policy barriers to bring down the cost of offshore wind." But, he said, Michigan’s momentum under Granholm ended when Snyder took over as governor.

"The deal is, it was of great interest to the [Michigan] Legislature, but then there was an election and everything petered out," Pruss said.

Larry Ward, executive director of the Michigan Conservative Energy Forum, part of a broader network of pro-clean energy conservative groups, agrees that the discussion has faded — for a variety of reasons.

"I don’t think anyone came out politically saying we shouldn’t do it," Ward said, citing "not-in-my-backyard" concerns and technical and cost challenges. He added that conservatives likely would be opposed if it required significant government subsidies. "Somewhere between all of those reasons is why it has laid low."

Meanwhile, Ontario is taking a wait-and-see approach. Ontario Ministry of Energy spokesperson Natasha Demetriades said the province has continued to study the issue since a moratorium was in place in 2011. "We will continue to prudently rely on available scientific research as well as the lessons learned in other jurisdictions on the development of offshore wind energy."

In addition to economics, Great Lakes port infrastructure in some areas, the ability to have vessels large enough to service the turbines and the build-out of high-voltage transmission also pose challenges to Great Lakes offshore wind development, Pruss said.

However, some Great Lakes shorelines are also peppered with coal plants, which offer an opportunity for connecting to the grid, said Charles Standridge, an engineering professor at Grand Valley State University in western Michigan.

Standridge was part of a team that assessed offshore wind potential for three years starting in 2011. The team studied an area of shallow water in Lake Michigan about 6 to 7 miles off the coast of Muskegon, a city in western Michigan. Pruss said the area could accommodate "several gigawatts, if not more" of wind energy that, by being in the middle of the lake, "wouldn’t have aesthetic concerns."

Standridge said about 10 percent more wind energy is available in the center of Lake Michigan than nearer to the shore, "but you’d have to decide whether harvesting that extra 10 percent was worth it," as it’s harder to install and maintain equipment at those distances.

"I think we laid the groundwork if a developer wanted to come along and do further assessments," Standridge said. "Sooner or later, someone is going to realize the potential in Lake Michigan and get out there and do it." 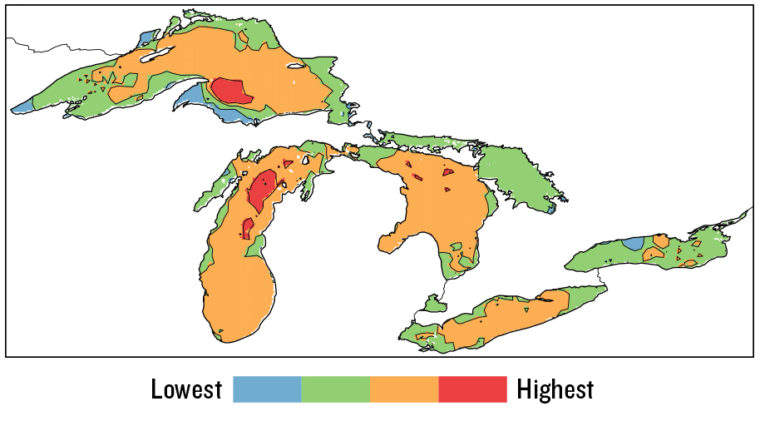 Other resources also offer indications of Great Lakes offshore wind potential. The Michigan wind council developed a GIS-based tool to identify areas off the coast of Michigan that would be suitable for generation. Researchers at Cornell University also produced a "wind atlas" in 2015 to show areas with the most potential. DOE shows Michigan with the highest "net technical energy potential" among Great Lakes states from offshore wind at about 200 terawatt-hours per year, followed by New York, Ohio, Wisconsin and Illinois. (In 2015, Michigan generated a net total of 113 terawatt-hours of electricity, according to the Energy Information Administration.)

Conservation groups are closely watching the Icebreaker project, which could provide some first-of-its-kind data on wildlife and bird migratory patterns and how they are affected by turbines in the Great Lakes.

Garry George, renewable energy director for Audubon California, said there is an "overarching need to transform the energy sector as fast as possible," and that climate change poses a major threat to hundreds of bird species in the coming decades. However, comments submitted to the Ohio Power Siting Board in March by Audubon officials and local societies called Icebreaker’s application "incomplete" and asked the board to "set a standard for data collection, analysis and planning" before a certificate is issued, as other permitting authorities in the Great Lakes region are likely to follow Ohio’s lead.

"We think there should be a standard of data collection and protocol to set the standard for [potential projects in] the entire Great Lakes," George said, as it’s not fully understood what impacts on wildlife might be within such an important migratory route absent onsite data collection. The Audubon comment letter recommended this should be done quantitatively based on the number of birds flying through the area and the percentage at risk of being killed by turbines. "We’re very excited about the potential for wind energy in the Great Lakes — we just think it has to be done right," George said.

As with most wind energy projects, there is also the issue of public perception and willingness to live among wind turbines.

And, as with most wind energy projects, there is also the issue of public perception and willingness to live among wind turbines. A 2013 survey from the University of Michigan found support (PDF) among residents of the Great Lakes Basin for increasing offshore wind power use. However, a main challenge comes from some landowners who would be able to see turbines from their property.

Ironically, the Natural Resources Defense Council pointed out in early 2017 that Ohio’s strict standards for siting wind turbines effectively could drive wind energy development out into the Great Lakes. For Pruss, this is a "huge concern to explore": Whether growing opposition to onshore wind siting in Great Lakes states induces development offshore.

DOE has given about $200 million since 2011 to various offshore wind research, development and deployment projects. The Icebreaker project received $40 million in DOE funding in 2016. Earlier this month, Energy Secretary Rick Perry announced $18.5 million for a new public-private research consortium "aimed at reducing the cost of offshore wind in the U.S."

If and when Icebreaker comes to fruition, LEEDCo CEO Wagner said it may at least give states a sense of whether they want to pursue offshore wind in the Great Lakes — and if so, how. But that’s a heavy lift for a single project, he added.

Pruss and others mention 2030 as a timeframe in which more Great Lakes projects could be built. A supportive political climate could accelerate it, as could subsidies that help speed the deployment of new technology and infrastructure.

"The government has an essential role to play," Pruss said. "It can be passive in this process and observe and act when called upon because government action is necessary. Or it can be proactive — that makes a huge difference."