Women-owned businesses: A niche market or vehicles for change?

Although there is a rise in the number of women-owned businesses in the U.S., they often remain micro and small enterprises, and have contributed about the same amount to the economy that they did in 1997.

It turned out to be a bigger business opportunity than I had imagined.

Thus, despite the fact that women-owned enterprises are increasing, women are clustered at the bottom of the pyramid, which means that the overall impact of women-owned businesses on the economy and society could be leveraged more. This is not only true for entrepreneurs. For instance, women are still under-represented in leadership positions, as fewer than 5 percent of the 1,000 largest companies in the U.S. have female CEOs.

I knew B.Accountability provided quality services delivered by an amazing team that speaks for itself, leaving me to wonder what value the Women-Owned Business certification could add to my business platform. If anything, I was concerned B.Accountability would be perceived as a token women’s business, a label that may overshadow the qualitative services we provide. In spite of my initial hesitation, I saw it as a business opportunity and applied for the certification, and it turned out to be a bigger business opportunity than I had imagined. 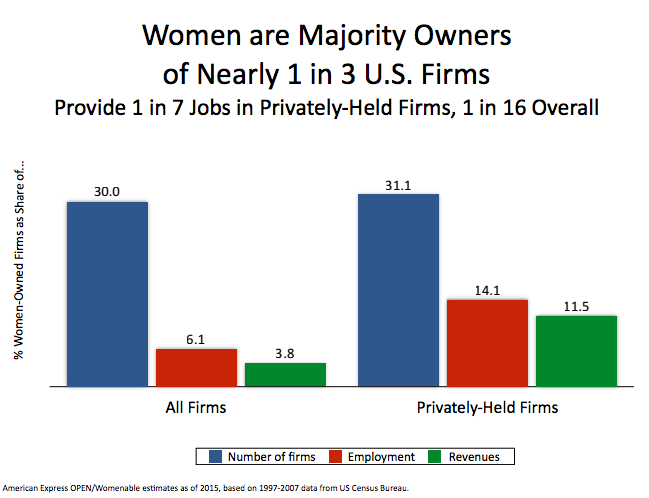 I quickly realized the value of my Women-Owned Business certification. In June, I was invited to a session in Orlando where Iand 3,500 other executives and procurement representatives from leading corporations, government entities, and female business owners from a range of industries met to discuss business opportunities and the role women-owned businesses play in stimulating economic growth.

For instance, I met with representatives from IBM, Wal-Mart, PepsiCo, UPS, AMEX, pharmaceutical companies, banks and many great female CEOs. All the attendees who hailed from a variety of sectors had a common vision: to expand women’s business opportunities in the marketplace.

Despite the fact that women-owned enterprises are increasing, women are clustered at the bottom of the pyramid.

Previously, as a Partner at PwC, my experience with procurement negotiations involved competition and lengthy negotiations. However, in Orlando, the atmosphere was collegial and it was clear that while companies did want the best deal, they also took social impact into consideration.

One might argue that women-owned businesses are a different kind of business —  they offer an opportunity for new collaborations and partnerships — at least that is what I saw in Orlando and what I anticipate seeing when I speak at the Go for the Greens Business Development Conference in late September. These companies are serious and produce quality products and services and want to grow bigger, employ more diverse people and generate more revenue for our economies.

Another benefit is that having more highly qualified women owning their own businesses will create a bigger pool of women who are able to increase women’s representation on corporate boards, and hence diversity in the workplace. I truly believe in leveraging gender diversity to yield high financial — and human — returns, as I argued in an interview with Forbes last year.

Women-owned businesses truly are a vehicle for change — they are reaching new corners of the market by fostering new opportunities for entrepreneurs as well as the Fortune 500, and are helping advance the SDGs. Now, instead of worrying about B.Accountability being labeled as a niche business because of its Women-Owned Certification, I am eager to engage in the opportunities for partnerships that it allows — and am excited my company not only advances sustainable development with its services, but also with its leadership and contribution to broader system changes.

Having said all that, I do hope that we in the near future don’t have to talk about women- or men-owned businesses — but about successful business with a purpose and a diverse workforce from board level to assistant.

Companies must work together to fight famine

How do you redesign your supply chain in a chaotic world?

The ESG bar is high this proxy season: Is your board prepared?

See all by Helle Bank Jorgensen