Too much, too little, too dirty. For the third consecutive year, reckless use and abuse of water is seen by global authorities as having the potential to seriously disrupt social stability, upend business supply chains, imperil food and energy production, and generally make life miserable for billions of people, according to the World Economic Forum's annual Global Risks report.

The various threats to the planet's supply of fresh water rank third – behind debt crises in key economies, and persistent unemployment – on the list of convulsive planetary threats of greatest concern to more than 700 business, government, and nonprofit leaders who responded to the Geneva, Switzerland-based think tank's annual survey. The latest Global Risks report, released today, is the ninth in a series that dates to 2006.

The various threats to the planet's supply of fresh water rank third on the list of convulsive planetary threats of greatest concern.

The security and quality of the world's water, however, goes even deeper than its bronze-level citation. At least three of the Top 10 risks identified in the World Economic Forum's survey are principally problems fundamentally involving water:

1. The failure to avert or adapt to climate change.
2. Floods and droughts fostered by extreme weather events.
3. Water scarcity and pollution at the root of food contamination and supply crises.

The Global Risks report uses a broad analytical lens. Its 60 pages of spider web charts and bold colors serve to highlight the complexity and interconnections between risks and regions. The strands are so tightly woven that no government, business, or charity acting alone can solve them, said the report's co-author Margareta Drzeniek-Hanouz, director and lead economist of the World Economic Forum's Global Competitiveness and Benchmarking Network.

"The issues are so big that they cannot be resolved by the business sector or the political sector alone," Drzeniek-Hanouz told Circle of Blue. She added: "The report's overarching recommendation is for public-private collaboration."

Produced and stored within well-defined basins, problems involving water are generally viewed as having effects confined to a specific community or region. But the authors of the Global Risks study argue that water shortages and bursts of surpluses caused by flooding are systemic risks that reach much further.

The report cites research, for example, showing that a terrible drought in Syria from 2006 to 2011 set the table for the country's civil war. Crop failures in the countryside prompted farmers to move to cities where existing economic and social pressures boiled over. Conflict was not an inevitable outcome, the report's authors said, but resource depletion increases the pressure on political systems, cultures, and economies.

In 2010, drought and poor harvests in Russia, a large grain producer, led to export restrictions. Higher prices rippled through commodity markets, increased costs for bread, and added a tailwind to the Arab Spring revolt. A year later flooding in Thailand snapped global supply chains and caused car and computer manufacturing to crater.

Smaller, local skirmishes over water also are becoming more frequent. Just this week, two people were killed in South Africa during a protest over water shortages. Though the root cause in this case was mismanagement of water, the importance of a reliable supply was tragically confirmed.

The Global Risks report also takes note of longer-term trends involving the security of the world's fresh water reserves. Climate change is a slow-motion lurch toward atmospheric conditions that will fundamentally change life on Earth in the coming decades, the authors said. A warming world will likely increase the likelihood of both engulfing floods and chronic drought. It will lift the oceans and put a treasure chest of property at risk – assets with an insured value of more than $10 trillion on the U.S. Atlantic and Gulf Coasts alone.

Roughly 600 million people also live in areas less than 32.8 feet above sea level. Low-lying Bangladesh and the Mekong River delta – two of the most densely populated regions on the planet – are endangered. Pacific Island nations are already seeing their homelands eroded and, in preparation for the day their homes will need to be abandoned, are testing the legal bounds of asylum.

In the continental interiors, extreme weather often takes the form of devastating scarcity or overwhelming abundance of water. Droughts destroy crops, and floods demolish homes. If dry conditions endure, a host of repercussions follow. Forests become a tinderbox awaiting a spark. Rivers shrivel, cutting hydropower generation, reducing the amount of water to cool power plants, and putting countries with a poorly managed electrical grid at risk for blackouts, as happened in Venezuela in 2009 and 2010. Worst of all, the competition for scarce food and water supplies heats up – sometimes with world-changing results.

Shifts in the global winds

Since 2006, when the first Global Risks report was made public, much has changed. The early editions emphasized macroeconomic risks: oil price shocks, a collapse in asset prices, or a decelerating Chinese economy. Chronic diseases, both in the rich world and in developing countries, made the list as did infectious pandemics. Risks were ranked according to economic losses and number of deaths, which gave greater weight to those risks more easily measured in dollar terms. Environmental risks such as water supply, climate change, and natural disasters were considered "core" risks but were firmly in the second-tier.

In the latest report, macroeconomic threats still rank high. After all, anxiety about global debt tops the list. But water and climate change have pushed upward. The report still uses economic loss and deaths as guidelines, but they are not assessed as overtly. Perception matters more.

Respondents were asked to assess 31 pre-selected risks based on the risk's likelihood and severity in the next decade. For the first time, respondents were instructed to select the five risks they thought most concerning. Women and people younger than 30 were more likely than men and people older than 30 to perceive environmental risks more seriously. More young people have been included in the survey in recent years – one possible explanation for water's rise.

The report encourages its respondents to consider the long term. Yet the window for avoiding the gravest threats is closing as the atmosphere gets warmer. Recent research on water scarcity makes that clear.

An increase in global average temperatures by 2 degrees Celsius compared to today will increase the number of people living with absolute water scarcity by 40 percent, according to a study published in December from dozens of researchers in China, Europe, Japan and the United States. Absolute scarcity is defined as less than 500 cubic meters per person per year within a country. The increase in those living with scarcity is in addition to what would be expected from population growth.

"Every degree matters now," said Jacob Schewe, the report's lead author, and a scientist at the Potsdam Institute for Climate Impact Research.

"The fundamental impact that climate change has on global water resources is becoming very clear now," Schewe added in an email to Circle of Blue. "We need reliable, quantitative knowledge about these impacts in order to support adaptation. But ultimately, there will be limits to what societies can adapt to, so climate change mitigation is crucial as the risk of water scarcity increases with rising temperatures."

How to achieve that? The risk report asserts that a weakening U.S., a growing China, and a jumbled middle requires new forms of global decision-making if systemic risks such as climate change are to be addressed. In fact, respondents selected a failure in global governance as the risk most connected to all others. 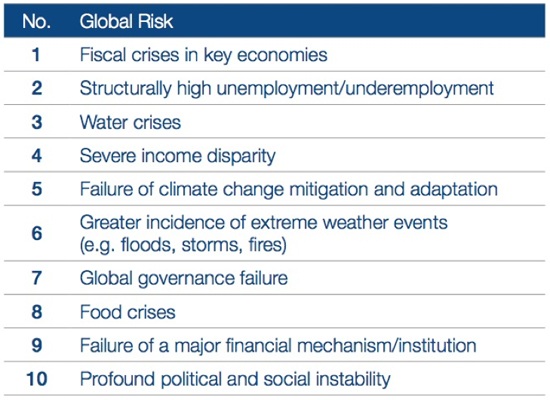 The report's recommendations in this regard are thin and generic-buzzwords about multistakeholder action and "agile and responsive multilateral governance." However, the purpose of the report is to be "a platform for discussion," said Drzeniek-Hanouz. Perhaps attendees at the forum's annual winter meeting in Davos, Switzerland pondered a stronger recipe. 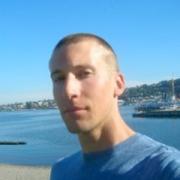 See all by Brett Walton