Since Neshati joined the company’s division in Lancaster, California, and Los Angeles three years ago, "it’s been [a] nonstop" hustle, Neshati told me at an electric vehicle industry event in Sacramento, California, earlier this year. As head of BYD America’s Heavy Industries division, Neshati has overseen the company's rapid growth stateside.

Neshati, who describes his time at BYD as "a blast," said the company’s U.S. arm has the nimble nature of a scrappy startup but with the backing of a big industry behemoth. BYD — which stands for Build Your Dreams — reported annual revenue of close to $17 billion in 2017, and a profit of $648 million for the year. The company has 220,000 employees.

"New energy vehicles," which include electric trucks and buses, drove much of the company’s revenues, with over $6 billion generated last year, up 12.8 percent from the year prior. In fact, BYD was the No. 1 electric vehicle maker in the world in 2017 in terms of the number of vehicles sold.

The company delivered 108,956 electric vehicles last year, according to Bloomberg New Energy Finance. That’s more than BAIC (No. 2), Tesla (No. 3) and BMW (No. 4), according to BNEF’s data.

The vast majority of those EV sales have been in China, which has some of the most aggressive federal and city government policies globally. Last month alone 73,000 electric vehicles were sold in China, compared to 19,500 in the U.S., stated BNEF. 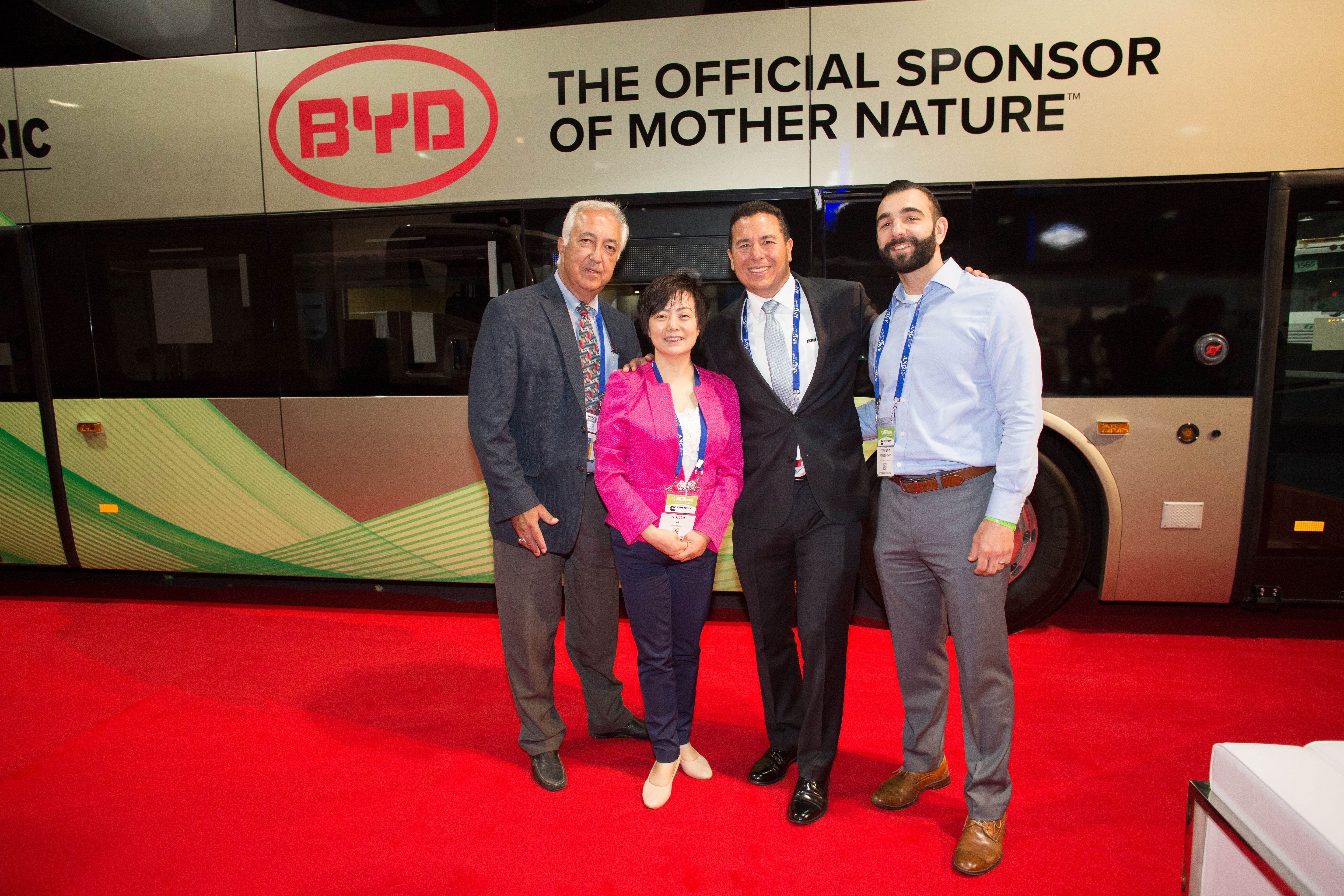 But in the United States, BYD has been steadily growing its sales, too — though on a much smaller scale.

Six years ago BYD opened up its Lancaster factory, starting out with just five employees. Today those facilities have expanded to 450,000 square feet and 800 workers.

Earlier this month at a major fleet vehicle event in Long Beach, California, BYD announced a deal to deliver a fleet of electric delivery trucks to Goodwill in San Francisco. The company also announced a partnership with U.S. Hybrid Corporation to make a first-of-its-kind fuel-cell battery-electric bus that will be used to shuttle airline passengers around Honolulu’s Daniel K. Inouye International Airport.

The electric vehicle industry is really just getting started.

The market for electric buses as well as medium and heavy duty electric vehicles has just started to hit an inflection point. In certain scenarios — such as urban transit or delivery — electric vehicles are already lower-cost to operate than the diesel-powered equivalent.

Companies such as UPS are buying electric delivery vans to lower fuel costs and to help their package-delivery fleets lower greenhouse gas emissions. Big automakers such as Daimler and Volvo are unveiling new electric medium and heavy duty EVs.

Corporate and government fleet managers can use various state, federal and local incentives to help with the upfront costs of the new electric vehicles. Commercial vehicles, in specific scenarios, could electrify much more quickly than passenger vehicles, thanks to the savings on fuel and maintenance that EVs can provide.

At the same time, some of the more heavy-duty use cases — like a semi-truck hauling timber hundreds of miles — will likely take longer to embrace battery-power. Some fleet managers are skeptical that electric semi-trucks will ever make economic sense to buy and run.

Tesla revealed last week that it’s only received 2,000 orders for its electric semi-truck and is not prioritizing its development as it focuses on Model 3 production.

But electric buses for urban transit could be one of the first commercial vehicle markets to electrify. That’s because buses have predictable, dedicated routes, a relatively light load (humans) and usually return to a centralized depot for recharging when not operating. BYD has years of experience making these types of battery-powered buses.

One leg up: BYD is one of the world’s biggest battery makers. That vertical integration — which Tesla is also attempting — enables BYD to cut costs and control its supply chain more than its competitors.

"Vertical integration allows you to control your own destiny. You’re not dependent on a battery vendor. You won’t have supply issues. You won’t suddenly run out of cobalt or something," said Neshati (cobalt is a key ingredient in battery production).

In China, BYD makes a lot of electric passenger cars. But BYD is also eying the U.S. market for its electric cars one day, in addition to commercial vehicles. A couple years ago it hired prestigious former Audi auto designer Wolfgang Egger to work on passenger vehicle designs that could set it apart from Asian competitors.

Although, of course, everything’s not always roses for BYD or its U.S. arm.

The steel and solar tariffs recently introduced by the Trump administration could turn out to be a problem.

The Shenzen-based parent has seen its stock drop significantly this year on increased competition and news that the Chinese government is reducing the level of subsidies for electric vehicles. A couple of weeks ago, BYD predicted that its profit for the first half of the year could dip substantially.

The steel and solar tariffs recently introduced by the Trump administration could turn out to be a problem for its U.S. division. BYD makes and sells solar panels and uses steel in its products. But Neshati is also worried about more tariffs coming, as well as anti-Chinese sentiment.

"The tariffs, depending on where they end up, could really be detrimental to our efforts. We’ve spent a lot of time and money and energy building this place up. We were one of the first Chinese companies to bring jobs to America," said Neshati.

But the broader market is going in the right direction for BYD — the electric vehicle industry is really just getting started. BYD, and its peers such as Proterra and New Flyer, can expect many bumps in the road as the market emerges.

Out of 70,000 U.S. city fleet buses, just 300 were electric as of 2017, according to BNEF. That means less than 1 percent of city buses were electrified in the U.S. last year. But by 2025, 5 percent of U.S. bus fleets are predicted to have gone electric. BYD hopes to sell a good portion of those.