When it's finished in 2019, it will be 99 stories high and serve as the headquarters of Pertamina, the national energy company. In addition to the 20,000 people who will work there, it will be the centerpiece of a campus that has a mosque, a sports center and a 2,000-seat auditorium for the performing arts.

Shaped like a funnel, the top of the tower opens at the top, capturing wind and sucking it inside to run a series of vertical wind turbines that provide 25 percent of the building's electricity.

Incredibly, its curved façade is precisely calibrated for Jakarta's proximity to the equator, which mitigate solar heat gain throughout the year. On two sides of the building are sun-shading "leaves" — semi-mobile curtains that allow daylight to enter while shielding the building from glare and heat from the sun. Radiant cooling systems replace air conditioners.

Other buildings on campus will be covered by solar panels, but the central energy plant that powers the complex will run on geothermal — a prime, renewable energy source in Indonesia.

A covered walkway called the "Energy Ribbon" winds through the campus, providing protection from the elements and generating energy from solar panels on top. It connects the buildings while leading people across land bridges and gardens. 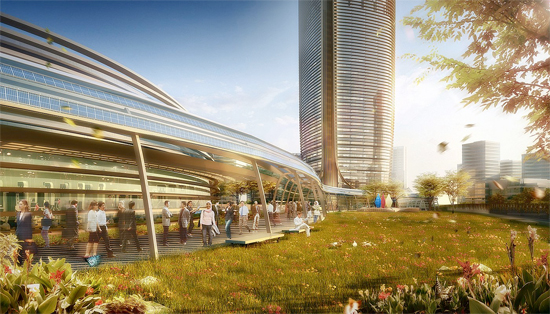 The building is designed to be a symbol of Indonesia's commitment to sustainable development. The architectural firm behind it is Skidmore, Owings & Merrill, known for combining innovation with energy efficiency and sustainability. Its Greenland Group Suzhou Center in China, for example, has a 30-story tall operable window and uses 60 percent less energy than typical skyscrapers.

"It is extremely exciting for the architects and engineers at Skidmore, Owings & Merrill to be working on a tower and campus for which energy is the primary design consideration," lead designer Scott Duncan told Fast Company. "Historically, super-tall buildings have focused on structural challenges: resisting gravity and lateral forces from seismic and wind. The rules have changed, and energy has become the defining problem for our generation."