A United Kingdom company is touting plans for what it is calling the "Super-Green Superyacht."

Design plans for the Soliloquy include up to 600 square feet of photovoltaic surfacing that can propel the 58-meter (190-foot) vessel to nearly 8 knots during a 12-hour period, Solar Sailor Holdings Ltd. has announced.

The company is sponsoring the project from Alastair Callender of Coventry University, who sought to design a yacht that was luxurious but also avoided the noise, vibration, fuel expenses and emissions that come with a conventional motor yacht.

"In this ever-increasing environmentally conscious time, I wanted to focus my attention on looking at possible solutions to some of the current problems associated with the superyacht industry," Callender said in a statement. "Eco-luxury should no longer be viewed as an oxymoron." 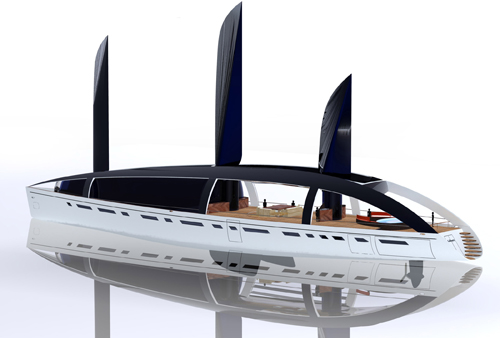 According to the Guardian, the ship will be powered with four fuel cells and hybrid diesel engines when there is not enough sun to power the yacht.

Automated operation of the rig's three pivotally mounted, rigid-wing sails -- equipped with solar panels and designed by Solar Sailor -- also require less manpower and smaller crews than cloth-sailed vessels. The yacht can also send power to the electrical grid at a marina where facilities are available.

The massive amount of fuel it takes to power a yacht has spurred other attempts to design vessels with a smaller environmental footprint. Pharos Marine in Egypt, for example, unveiled plans in 2009 for the Orcageno (pictured right), a hydrogen diesel-electric systemcapable of hitting 18 knots for up to 1,800 nautical miles.

Meanwhile, Sauter Carbon Offset Design has hatched plans for several green superyachts, including the Formula Zero, a 43-meter (141-foot) vessel with a catamaran configuration the company claims can achieve a 75-100 percent reduction in greenhouse gas emissions.