This week, Philips Lighting said that its AmbientLED 12.5-watt bulb — which, just to confuse you, is also sold under the Philips EnduraLED brand — has qualified for a EPA’s Energy Star rating. That means that it’s an efficient and, quite possibly cost-effective alternative to the 60-watt bulb, even with a $39.97 list price at Home Depot.

Here’s how the math works, at least according to Philips:

That assumes electricity costs of 12.5 cents/kwh, slightly higher than average across the U.S. but a lot less that you pay in high-cost states like California.

Practically a bargain, no?

The Energy Star rating matters because it means that the bulb, which is evidently the first LED bulb in its category to qualify, can earn you a rebate from your local utility. There’s more on the rebates here from the U.S. Department of Energy. Each state has its own rebate program, forms to fill out, etc. Fun.

Better news is that for now Phillips is offering a $10 cash rebate on the bulb.

I have been using an early production version of the Philips bulb around my house for the last few days. At first blush, I’d say this is the sort of product that could finally help nudge out the beloved, if wasteful, incandescent bulb.

Philips says that it is also the first and only company to enter the U.S. Department of Energy’s L Prize contest, which calls for an LED equivalent to the 60-watt bulb that can produce 900 lumens using less than ten watts of electricity. The L Prize is a government-backed competition to encourage innovation in lighting.

LED light bulbs, by the way, offer significant advantages over curlicue CFLs. They contain no mercury, turn on instantly, last longer and are more efficient. GE, Osram Sylvania, Cree and EarthLED also make LED bulbs, which can range in price from $20 to $80. 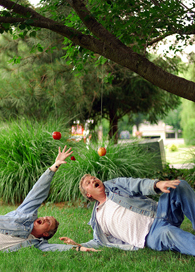 If you’re balking at those price tags, you’re surely not alone. In fact, you can now understand first-hand one of the big reasons why we waste so much energy in the U.S.: It’s very hard to persuade people, even supposedly rational business people, to spent money today to save money in the future.

Maybe you’re a tenant, and you won’t be able capture the operating costs savings of the bulb. Maybe there’s a chance you’ll move soon. Maybe you don’t have $40 to spare right now. Corporate executives and the owners of commercial buildings face these kinds of obstacles, too.

Remember that next time someone talks about how easy it is to pick the low hanging fruit.