The wow factor: The next phase for corporate climate targets

Shine white light into a prism and you reveal a bright, beautiful spectrum; all the colors of light that are visible to us. Shine a white light into sustainability reporting, and the spectrum that comes back is a bit wider, a lot hazier and sometimes missing some pieces — particularly those related to climate change.

This is understandable; after all, complex problems create a need to confront complex questions, and climate change is about as complex an issue as can be imagined.

But just take a look at President Barack Obama's 2016 State of the Union address for a reminder of one specific source of creative problem-solving capacity yet to be fully tapped in response to our most pressing global challenges:

…This year I plan to lift up the many businesses who’ve figured out that doing right by their workers ends up being good for their shareholders, their customers and their communities, so that we can spread those best practices across America. In fact, many of our best corporate citizens are also our most creative. This brings me to the second big question we have to answer as a country: how do we reignite that spirit of innovation to meet our biggest challenges?

If the president is right, the private sector can be endlessly creative and quick to embrace innovation. Climate action is now in need of such innovation.

The companies on the leading edge of climate reporting — those that score highly on independent assessments and gain accolades for their engagement — have many key attributes in common: They measure their climate impact; they have set targets to reduce it; and they have made progress toward those targets.

The "Wow Factor," what currently separates those just making progress from those whose achievements become lauded and held up as a shining example among their peers, is a commitment to go either 100 percent climate neutral or 100 percent renewable; a challenge accepted by Microsoft, Walmart, Nike and IKEA, among others.

But with the Paris Agreement on climate change clinched and interest in this type of reporting on the rise, we may see these types of commitments from companies with increasing frequency, diminishing their PR hype.

On the horizon is the need for a new type of Wow Factor; one that goes beyond traditional green commitments and ushers in an era of truly climate-responsive business culture. What can really wow others in the era of the Paris Agreement? Let’s explore:

This list includes, but is not limited to: energy costs under a full carbon price, operational readiness for climate-related extreme weather events (both for headquarters and along the supply chain; CDP reports that suppliers who pursued greenhouse gas reductions saved $6.6 billion last year), climate-related threats to key inputs, and investments and other asset holdings in high-carbon industries which may become "stranded" as the low-carbon economy takes hold.

The best companies will understand these risks systemically and report on them accordingly. This level of commitment to understanding risk is difficult; it requires that each business division be properly trained to recognize these risks, and that there are clear expectations from management on how to address and report on them. One way companies are attempting this is with internal carbon pricing.

The Paris Agreement served as the launch pad for this new type of active advocacy around global carbon pricing systems — ultimately, a strategy that will bring greater certainty to business decision makers. As with today’s best sustainability reports, tomorrow’s best climate disclosures will be easy to browse, will be clearly written, and will tell a story about how actions taken to mitigate these risks directly affect the lives of their customers, employees or communities.

The writing is on the wall for business models based on short term shareholder return. Increasingly, companies are being confronted with the reality that their "social license to operate" — the extent to which society will allow free and unmitigated resource consumption — is rapidly changing.

The smartest companies are seeing that their ability to create brand loyalty and increase their valuation in the long term is inextricably tied to the prevailing trends — trends that include social justice, the drive for meaningful work and environmentalism.

With regard to climate change, innovation is key. The companies that continue to pursue growth will need to do so in a way that does not increase resource consumption, while other companies may choose to decouple from the growth imperative and pursue cyclical business models.

Beyond doing "less bad" with respect to emissions, companies that actively invest in low carbon infrastructure and technologies today — and for reasons beyond mere cost savings — are more likely to see their social license to operate remain intact long into the future.

Some great examples of innovation are companies that encourage only needed use of their products (see Patagonia), and those that tie the mitigation of climate risk directly to compensation at the executive level and beyond.

The trouble with most current reporting on climate change is that it tends to be treated as a separate issue from the other common metrics of sustainable business.

From a practical standpoint, this makes sense. Companies tend to focus their attentions most strongly on highly used resources — such as water for beverage companies or minerals for tech manufacturers. What’s often missing is the acknowledgement of an interaction between climate change and resource extraction.

Starbucks is a prime example of a company that has made this link — using raw coffee beans, a resource threatened by rising temperatures. It has stated that if action is not taken to halt the warming climate, Starbucks would be in need of a rapid and intense business model shift, which is definitely a personal issue for the millions of workers nationwide who depend on that caffeine pick-me-up.

Effectively communicating the interplay between climate and other "priority" resources clearly displays the type of systems thinking that smart companies will be employing in the future.

Shifting before all other options are exhausted

Of course, some industries are naturally carbon-intensive. These industries face the greatest dangers of all: the danger that other industries will divest their holdings; and the danger that they will lose their social license to operate, perhaps much sooner than they anticipate.

For these industries, hope is not lost — large scale pivots are possible and the opportunities are immense. For example, the auto industry is already placing heavy stock in hybrid and all-electric engines, effectively positioning themselves for a future without fossil fuels.

And for the fossil fuel companies themselves, billions of dollars await those who bring about the next era of low-carbon technologies; an era which may include nationwide utility scale renewables, energy storage and new ways to capture the energy of our wind and waves. We can see this born out in the business strategy of German utility E.ON, a large, carbon-free utility investing in renewables, that recently formed a separate entity for its fossil-fuel and energy-trading business.

In the years ahead, actions taken on climate change may determine which companies thrive and which fold. It’s the "how" of these actions that determines the Wow Factor. Governments, NGOs and individuals around the world are watching. Now is the time to show the world what business is really capable of. 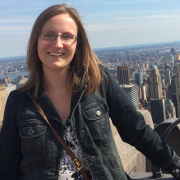 See all by Elizabeth Hardee