Writing the book on health, risk and climate change

Writing the book on health, risk and climate change

Daniel Callahan, cofounder and former president of biomedical research organization the Hastings Center, wrote the book "The Five Horsemen of the Modern World: Climate, Food, Water, Disease and Obesity," published by Columbia University Press. Here, he explains why and how he connected the dots on climate change and other looming risks to business and society.

Q: Why did you write a book on the "five horsemen"?

Callahan: I have a mind that seems to like lateral moves. Health Care ethics and policy have dominated my career, but I like wandering into other territory. Beginning about four years ago, as the climate change debate was heating up, I was struck by the sense of doom and gloom that was evident among climate researchers. 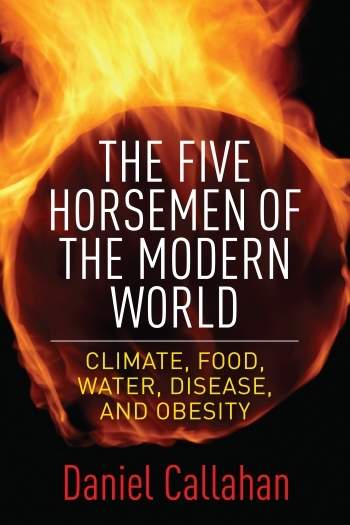 Yes, scientific knowledge was gaining ground, as was the adoption of helpful technologies such as solar panels and wind farms. But that was far below the pace of change needed to radically lower CO2 emissions; that was just getting worse and worse. In health care, obesity showed a depressingly steady increase going back some 40 years, with such chronic diseases as heart disease and cancer going up as well in tandem and an unbroken ascendency; and now starting 10 years sooner in poor countries.

And while looking at environmental and climate change, I could hardly ignore similar patterns in water scarcity and global food threats.

My basic question is this: how is the persistently downhill path of my seemingly different five horsemen to be explained? It was not from a lack of attention. Hundreds of thousand researchers and hundreds of millions of dollars have been spent on policy changes at both the international and country levels.

Those disturbing facts invited what in medicine is called a differential diagnosis, that of sorting out of many symptoms those that identify a specific disease — and then going from there to appropriate treatment. That is what I have tried to do with the five horsemen.

Q: What did you learn from your diagnosis?

Callahan: Tolstoy famously wrote that "all happy families are the same, but all unhappy ones are different." That may well be true for families, but not for my horsemen.

I Identified similar and important features.

The first is low public priority. Public opinion polls and other surveys show that the general public in most countries is aware of the dangers of the five horsemen — but all tend to give it a low priority. It seems to be something to worry about but not to fear. Resistance to regulation and taxes. Hardly surprising, a public that is worried, but not too much, dislikes regulation and taxes, which cut more deeply into personal lives.

The second concept is that it goes back to the 1970s. While there was an awareness of the five horsemen earlier, each showed a sharp jump in the 1970s just as there was then the emergence of neoliberalism, stetting the stage for the coming of Ronald Reagan and Margaret Thatcher.

Finally, there's the idea that we have a love of progress. Progress is a much-loved modern value, but one that is a doubled-edge sword. It is industrial progress and GDP growth that gives us global warming. It is technical wizardry that allows the depletion of deep underground water that cannot be replenished. It is cheaper and more available food that gives obesity. And that obesity in turn gives us excessive heart disease and diabetes.

Q: What has been the role of industry opposition and academic backlash?

With global warming, it is the coal and energy industries that bring to bear deep pockets and layers of lawyers that give them a heavy clout; and a conservative Congress in the U.S. is an important ally. The food and beverage industries play a similarly obstructive role with obesity, often effectively blocking regulation and taxation of their unhealthy products. Chronic illness has to wrestle with the medical device and pharmaceutical industries, resistant to any price control of its expensive products.

"Water," Boone Pickens has said, "is the new gold." He may be right about that, and the kind of wrestling that goes into the selling and regulation of it is often furious.

With business responsible for the bulk of climate financial flows, and producing far and away the greater part of global GDP and jobs, its active support will be the key to sealing any deal governments make.

Yet it needs also to be said that the academic and research communities have not always helped matters. It is understandable that they will often see their policy ideas and perspectives rejected, and sometimes their science belittled, as if ideologically infected. They have good reason to complain. But serious efforts by them to close that gap have been few and weak.

I propose in my book that they adopt the diplomatic model used in international relations, that of a willingness to talk despite suspicion, to understand the values of those they criticize, to be willing to compromise and look for alternative pathways.

If, for instance, federal regulations of a kind are needed to reduce fossil fuel emissions, and resisted by companies that will lose money and their employees put out of work, then helpfully look for ways to reduce the pain and to seek alternative possibilities for those companies. Don’t just shake your fists.

Q: What Is the model offered by business?

Callahan: Of all my five horsemen, two things came to stand out. One of them was the advances being made in global warming efforts in moving ahead and opening some promising new pathways, far beyond anything happening with the other four horsemen.

The other was the change in pace, insight and energy brought to bear by the global business community in that effort. That was the earlier missing link with global warming. It came about slowly, beginning in the 1980s, and began on a negative note.

A number of global and American corporations established a Climate Global Coalition, which then undertook a television campaign against U.S. endorsement of global carbon emissions. The coalition began to fall apart in the 1990s in the face of growing scientific evidence of the harm those emissions were doing.

In its place was a potent mix of corporations and major foundations that began with environmental concern as its main initial stimulus but gradually encompassing global warming as well. The 2014 People’s Climate March in New York, drawing some 300,000 participants along with a number of business satellite programs, was a notable step along the way.

George Kell, executive director of the U.N. Global Compact, succinctly noted at that time the important business role: "With business responsible for the bulk of climate financial flows, and producing far and away the greater part of global GDP and jobs, its active support will be the key to sealing any deal governments make, or to move ahead if negotiations fail. Moreover, corporate engagements and activity can be pivotal factors in disarming skeptical outlooks."

I wish the same could be said of efforts to cope with my other four horsemen. With the business role in global warming as an important model, two other ingredients seem necessary as well: grass roots movements (as personified in the New York march); and legislative interest and action.

It is that triad that is now crucial. Global warming efforts now have all three (although with notable struggles in the U.S. Congress, more so than in most other countries). I came also to think that fear is a necessary ingredient in firing up all of them, but that is easier to find globally with global warming than with the others.

The main difference is that the others do not have the global scope of climate change, harming many places around the world but not others. There are, for instance, severe water problems in many areas and countries, but not in Europe or the eastern United States.

My beef with beef

The inconvenient truths behind the 'Planetary Health' diet

EPA Touts 40 Years of Successes, but What Do the Next 40 Hold?