Yahoo's latest data center, which we first wrote about earlier this year, brings the decidedly low-tech ideas of chicken farming to the server farm, and showcases the big green potential of small ideas.

The "Yahoo Computing Coop" is based on the principles of chicken coop design: A series of long, tall buildings aligned along the path of the prevailing winds, the Coop is able to harness those winds for free cooling for most of the year, much as chicken farmers use the wind to clear out the smells of hundreds or thousands of chickens.

From its design to its operation, Yahoo's new facility is about as green as large-scale compute facilities come, with a power usage effectiveness (PUE) ratio of 1.08 -- dramatically lower than the industry average of about 2.0.

PUE is the standard benchmark of data center efficiency, measuring how much of the power drawn into the facility is used for computing instead of cooling and lighting.

Based on its cooling-centric design, the YCC uses less than 1 percent of its total energy on cooling, and consumes at least 40 percent less energy than conventional data centers.

With none of the raised floors commonly found in traditional data centers -- the Coop's servers, pictured below, sit on poured-concrete in preconstructed steel buildings -- Christina Page, the company's director of climate and energy strategy, described the building as being designed to keep servers cool rather than maximize the number of servers in the space. 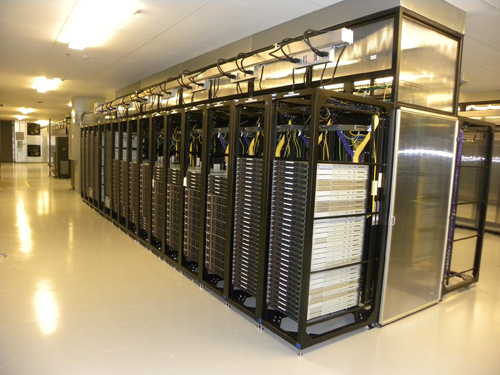 Yahoo also designed the facility to function without needing chillers, and as a result it will use 95 percent less water than other facilities. Rather than chillers, the Coop will use direct evaporative cooling from Lockport's hot, humid summer climate when outside air is insufficient to cool the data centers.

According to Page, the green design of this data center is a win-win.

"By owning, designing and building these energy-efficient data centers, it's good for our bottom line and better for the environment," Page said. She explained that removing the "super-expensive" chillers in particular saved the company plenty of money, and not using water for cooling keeps the Coop from generating wastewater that needs expensive treatment.

Part of the inspiration for the facility came from the architecture in nearby Buffalo, where industrial facilities were designed to make the most of the region's cool air long before air conditioning was even an option.

The site was chosen with sustainability in mind, from the cool climate that allows outside-air cooling almost year-round to the nearby Niagara Falls, which will provide the facility with a clean hydropower source of energy. (A move that will, incidentally, keep Yahoo off of Greenpeace's radar, at least on this issue.)

Yahoo's engineers took some of the successes from the Coop process to apply to the company's existing data centers. Page said that Yahoo was able to save 1.5 million kilowatt-hours a year on its Sunnyvale, Calif., campus by knocking a hole in one wall of the server farm and putting in louvers to allow outside-air cooling.

Even the Coop itself is certain to evolve in the future. "We're constantly evolving, we've got incredibly creative and smart engineers who are designing and running these things, from the standard of the bottom line as well as environmental performance," Page said. "All the challenges out there are opportunities that we're trying to take advantage of."