GreenBiz is pleased to publish this among the winning entries from the 2015 #CleanEnergyU essay competition.

Since April, when California Gov. Jerry Brown stood on top of the dramatically snowless Sierras and mandated statewide water cuts, the public and media frenzy surrounding California’s dwindling water supply has continued to grow in fervor.

The media has focused upon the animosity between groups, making caricatures of the key factions as the public decides who is most to blame. In the media’s eyes, farmers, fish heads, lawn gluttons and government officials are locked in a multi-way tug of war, desperately fighting to gain control of what little water California has left. Unfortunately, in the thick of this "high school drama all over again" (as one water lawyer put it), stories of progress and innovation get overlooked. This is exemplary of climate change and environmental challenges.

This is not the first time California has had to buckle down in the face of drought. Ever since the arid state was settled in the 19th century, Californians constantly have been fighting to expand and develop in what is, in many places, a desert. Major droughts ever since then have proved to be challenges to Californians. However, these crises have not been roadblocks. In many ways they have given California the motivation to innovate new solutions when it comes to its relationship with water.

Take, for example, the drought of the late 1970s. Under the leadership of Brown's first term as governor, the state pushed through a novel new policy to reimagine how California managed its water. In the previous years, water management was based completely on penciled-in lines on a map, the remnants of California’s centuries-old water laws. Originating in the Gold Rush era, these laws favored the principle of first come, first serve over any considerations of geology or ecology. In cities, water rights were determined by the land under city jurisdiction — with no regard to where the water was sourced. 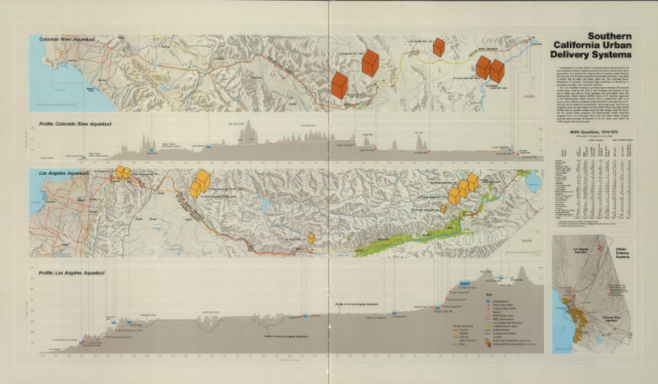 In 1976, when drought began taking a toll on the state’s economy, this antiquated version of water management finally began to be phased out. Brown commissioned the California Water Atlas, a technicolored, science-based system for managing California’s water resources. The Atlas’s full-page, full-color maps and illustrations combined history, hydrology and social theory into a completely new way of managing water.

The atlas attempts to help Californians envision water "beyond the faucet." It emphasizes that the history of California is, at its core, a history of water, and incorporates this philosophy into how water is managed. Under the new Water Atlas, water policy began to address statewide trends rather than simply focusing on isolated water districts. Gradually, policy and infrastructure began to follow in the same direction, marking a turning point in the state’s relationship with water.

Despite all of the current media emphasis on the antagonistic atmosphere that the current drought has created, many groups are working on solutions that will be just as transformative as the 1976 Water Atlas. In Glendale, on the outskirts of Los Angeles, a group called the Arid Lands Institute is working on projects that fundamentally reimagine the way that cities interact with water.

By its calculations, the city of Los Angeles could survive almost completely on its own water supply if it were ideally managed.

Although many policymakers have concluded that the only way to combat the drought is either to increase water supply by bringing in entirely new sources of water or to dramatically cut water usage, the Arid Lands Institute researchers are pushing against this status quo. The Institute has proposed a hybrid solution for water self-sufficiency for the Los Angeles metropolis. The team has reimagined urban areas as sponges by developing Hazel, a GIS tool that integrates aquifer, pollution and land use data. By its calculations, the city of Los Angeles could survive almost completely on its own water supply if it were ideally managed.

Arid Lands team member Aja Bulla-Richards, an AC Martin Scholar, has been working on a project that focuses not only on hydrology, but also on the way that people visualize water. She reasoned that the cityscape’s impermeable asphalt, sidewalks and streets were forming both a physical and mental barrier between city dwellers and their underground water system.

Bulla-Richards plans to break this barrier. She intends for the streets to be used as "rivers" for Los Angeles’s intricate aquifer system. Her solution is to drill a network of small holes at strategic points in city streets, which will allow rainwater and runoff to recharge aquifers. These holes will be colorfully painted before they are drilled, letting people "see" the water system working below their streets. The project also will be a community beautification endeavor. Drought-resistant plants will be planted in now-permeated areas that were previously just asphalt and concrete, greening the city and creating more walking and recreation space.

As the drought worsens, and as we begin to deal with the ramifications of climate change, creativity in crisis is the more critical battle.

Bulla-Richards already has started making this project a reality. She threw a block party in the Pacoima neighborhood, at which community members showcased water-themed art and painted colorful "holes" on the streets, the first cognitive step in reimagining the city’s water. This block party showcases the opportunity not only to improve relationships with water, but also to beautify and improve marginalized communities.

In San Diego, there are also city initiatives working towards constructing a new responsive waterscape. The city is implementing a program that will boost the water supply by cleaning and reusing wastewater. In this Pure Water Initiative, city wastewater will not flow into the ocean, but will be collected, purified and sent back into the city water supply.

While many have pointed to desalination as a potential solution to the drought, Cathy Pieroni, a water resources specialist with the city of San Diego’s Public Utilities Department, points out that potable reuse is actually more reasonable. Because city wastewater starts out much cleaner than seawater, it requires significantly less energy to purify. With its ambitious climate goals, California needs to employ low-energy water purification techniques. Potable reuse meets this challenge, whereas desalination falls short.

In addition, Pure Water is actually cleaner than desalinated seawater. In fact, "it’s the cleanest water supply source we have," said Pieroni. The Pure Water process is so clean that there have actually been concerns that it might damage pipes that are used to mineral-heavy water flows. The city has been making huge strides in pushing forward this project.  By 2023, a 15-million gallon per day water purification facility should be in operation. The Pure Water Initiative plans to produce one-third of San Diego’s drinking water supply — 83 million gallons per day — by 2035.

These projects demonstrate the potential for solutions that not only will help California overcome the drought, but also radically change the way Californians interact with water. Although much of the focus has been on who or what is failing, pointing fingers is a waste of time when we could focus on the progress and victories that are being made.