Replacing the burning of fossil fuels in our residential and commercial buildings with clean electricity is a crucial step to protecting public health and eliminating climate pollution. Multiple studies, including RMI’s "The Economics of Electrifying Buildings" (PDF) and E3’s "Residential Building Electrification in California" (PDF), have shown that using efficient electric heat pumps rather than gas-fired appliances is cost effective in newly constructed buildings and provides significant carbon pollution reductions. As coal plants retire and are replaced with large amounts of wind and solar, our electricity is getting cleaner and the benefits of electrification are increasing.

So, it was surprising to see a recent report from the National Institute for Standards and Technology (NIST) posit that a gas home has a lower environmental impact than an all-electric home. In "Gas vs. Electric: Heating System Fuel Source Implications on Low-Energy Single-Family Dwelling Sustainability Performance" (PDF) NIST writes that all-electric systems are more carbon intensive and more costly than gas-fired systems in new buildings built to the state of Maryland’s code.

NIST analyzed a single-family home in Maryland, looking at both natural gas and electric options in a baseline code-compliant scenario, a lowest-cost scenario, and a net-zero energy at lowest-cost optimization scenario. The study concluded that in all scenarios, all-electric systems have more significant environmental impacts than gas-fired scenarios, largely because of a supposed reliance on coal as the primary source for electricity generation in Maryland.

Replacing the burning of fossil fuels in our residential and commercial buildings with clean electricity is a crucial step to protecting public health and eliminating climate pollution.

Replacing the burning of fossil fuels in our residential and commercial buildings with clean electricity is a crucial step to protecting public health and eliminating climate pollution.

The NIST report falls short in three critical ways. First, it relies on old and no longer relevant data about the percent of electricity generated by coal-fired power plants. Second, it fails to consider the most efficient electric appliances available on the market. Third, it makes assertions that buildings powered by electricity are more expensive than fossil-fuel fired buildings without providing sufficient supporting evidence or addressing other studies, including "The Economics of Electrifying Buildings," that reached the opposite conclusion.

With the enormous progress we have made retiring coal-fired power plants over the past decade, our electricity is a lot cleaner. Today there are clear benefits to replacing the use of fossil fuels in our buildings with electric appliances — indeed, the carbon dioxide pollution per unit of electricity is down 32 percent nationwide since 2001, according to emissionsindex.org. In Maryland, the focus of the NIST study, the grid was 45 percent cleaner in 2017 than in 2001. The NIST study misses this historic transformation by relying on outdated pollution information, stating that the higher emissions impact from heat pumps is due to "the significant share of coal used for electricity generation in Maryland (greater than 50 percent)." In fact, according to the Energy Information Administration, from April 2018 to March coal use was only 19 percent of Maryland’s electricity mix.

Maryland’s 2018 grid mix — 30 percent natural gas, 35 percent nuclear, 23 percent coal and 10 percent renewable — makes heat pumps significantly less carbon-intensive than natural gas-fired devices. Because Maryland is adding additional clean energy sources such as wind and solar every year, electric appliances will continue to get even cleaner in the years ahead. Indeed, Maryland just enacted a commitment for the state to rely on 50 percent renewable energy by 2030.

There are clear benefits to replacing the use of fossil fuels in our buildings with electric appliances — the carbon dioxide pollution per unit of electricity is down 32 percent nationwide since 2001.

The report also asserts that electric appliances are less environmentally friendly than natural gas appliances because of additional health risks — cancer, mercury poisoning, asthma and other respiratory ailments — due to the reliance on coal as a primary source of electricity. Coal does have significant negative health impacts. But as NIST’s assessment is based on the same outdated data about coal’s contribution to Maryland’s electric grid, these assertions are woefully out of date. 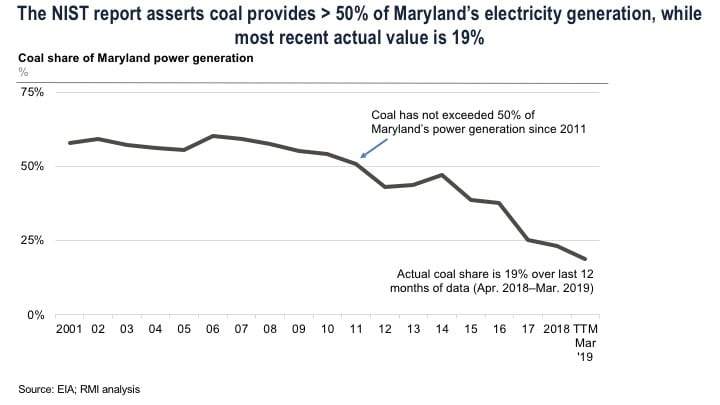 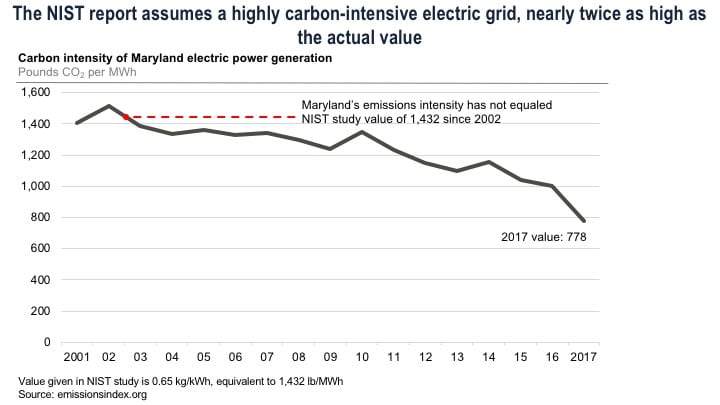 For the other scenarios that NIST looked at, the devices selected were higher efficiency than baseline code compliance, but not nearly as highly efficient as the best devices available. While NIST looked at devices with a seasonal energy efficiency ratio (SEER) of 16.5 and a heating seasonal performance factor (HSPF) of 9.1, NEEP’s Cold Climate Air Source Heat Pump List includes devices with efficiencies up to SEER 19.5 and HSPF 11. Minisplit devices can work at even higher efficiencies, including SEER 38 and HSPF 15. Had NIST analyzed the most efficient electric heat pump appliances for both space and water heating, its all-electric building results would have shown improved cost and carbon savings.

The report’s third shortcoming is its suggestion that the lifetime costs of gas-fired appliances are cheaper than heat pump systems in their baseline code-compliant scenario; although in the net-zero building scenario, the writers assert it is cheaper to build all-electric. While the study does not provide sufficient detail to scrutinize these conclusions, the finding that a newly constructed gas system is cheaper than building all-electric runs counter to our own findings in "The Economics of Electrifying Buildings." In addition, E3’s recent study further concludes that "all-electric new construction delivers lifecycle savings relative to a mixed-fuel home with AC." In new construction, building all-electric has cost benefits in part due to the avoided costs of separate heating and cooling equipment; a heat pump provides both heating and cooling.

In addition to the lifetime costs of device and energy usage, considering the avoided costs of extending gas service to new buildings makes all-electric buildings even more attractive. While gas extension costs vary, the cost of the line extension is commonly in the range of $5,000–$10,000 (PDF) ;per home, depending of the length of gas main required.

The finding that a newly constructed gas system is cheaper than building all-electric runs counter to our own findings in 'The Economics of Electrifying Buildings.'

Heat pump systems also can provide improved comfort as compared to gas-fired systems, due to their ability to modulate heating output up or down to match the building’s need. However, the NIST study concludes that the gas home is more comfortable, arguing that the number of "uncomfortable hours" per year is higher for all-electric homes. The authors claim this is due to the smaller heating capacity of the heat pump, making it unable to maintain the target temperature. If in fact the heat pump they modeled is too small, the simple solution would be to increase its size, as heat pumps do come in larger capacities. Indeed, cold climate heat pumps do operate in chillier climates; NEEP’s Cold Climate Air Source Heat Pump List includes thousands of heat pumps that work down to 5 degrees Fahrenheit with the best devices retaining setpoints at 12F. We explore all-electric homes in cold climates in the recent cold-climate addendum to our Economics of Zero-Energy Homes report.

In contrast to NIST’s conclusions, we generally expect that heat pump systems make for more comfortable spaces. Their ability to deliver only the amount of heat needed allows them to run more frequently at lower outputs, compared to gas furnaces which typically run in short bursts at high power. In this way, heat pumps are better able to maintain steady temperatures more consistently throughout a home.

Electrification is a cost-effective approach to decarbonization

Building decarbonization is a necessary component of our overall climate change strategy. Multiple (PDF) analyses (PDF) have shown that for new construction it is cheaper to build all-electric than to install gas-fired appliances and air conditioning. RMI found this to be true for all new construction scenarios, even without considering the gas infrastructure costs of new service lines. In all but the most coal-heavy regions, heat pumps provide significant carbon savings compared with natural gas alternatives. When modest estimates of methane leakage are incorporated into the analysis, natural gas systems look even more carbon intensive. Natural gas stoves without venting hoods have serious health concerns from poor indoor air quality (PDF); electric stoves do not emit the same pollutants.

To achieve our carbon goals, we must decarbonize our building stock quickly. Both heat pump performance and the carbon intensity of the electric grid have improved significantly in recent years; in order to electrify quickly, builders, regulators and customers must be armed with the resources and facts to make educated decisions. Programs such as former New York City Mayor Michael Bloomberg’s Beyond Carbon campaign will provide localized resources to help cities and states meet their climate goals, with building electrification as a key element. With accurate information and thoughtful policy, we can decarbonize our building stock and move toward our greenhouse gas goals.