You can't outproduce our environment

I practiced the conventional production model of farming for many years. I chased higher yield when growing crops and more pounds when raising beef. Everywhere I turned, the message of increasing production was pounded into me. Magazines, newspapers, radio, universities, extension service, agricultural agencies, everywhere and everyone was telling me that I had to produce more "to feed the world." Stacked GMO traits, hybrid grain varieties, foliar fertilizer, seed treatment, larger equipment. As I write this, I am watching my neighbors pull into a ﬁeld with three large combines, two grain carts and four semi tractor-trailers. My in-laws farmed for 35 years and never had any equipment larger than two single-axle grain trucks; the largest had a 16-foot box. My, how things have changed. 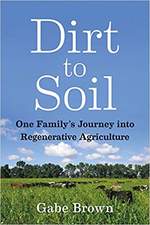 It is the same with livestock: performance-tested bulls with the highest expected progeny differences (EPDs), genome testing, total mixed rations with the latest ionophores, all designed to produce more, more, more! I distinctly remember ﬂagging down a neighbor on the road once to have him follow me back to my corrals so I could proudly show him a bull calf that weaned at over 900 pounds. I was so proud!

I chased that model for over 20 years. However, I began to question myself after the disaster years. Those four years of drought and hail were hell to go through, but they were the best thing that could have happened to me. Adversity forced me to change the way I looked at things. Slowly, over time, I found myself questioning why I was following the more-more-more mantra. Was I chasing short-term gain at the expense of my ecological resources?

My doubts and dissatisfaction came to a head one day in 2010 when I was lamenting to Paul the fact that our corn yields, although good, were not as high as some others in the area. Paul looked at me and said, "Dad, don’t you think that you are trying to outproduce our environment?" Wham! That statement hit me like a ton of bricks. He was absolutely right. Nature does not care about yield and pounds, nature cares about enduring. Nature wants to be sustainable. Did I want to farm for one more year or did I want to farm for decades? I had to let go of the yield-and-pounds mentality.

The changes in agricultural land in the United States due to the current production model are disturbing and sad. I will use my ranch as an example. From historical archives we know that 140 years ago this part of North Dakota was covered with a diverse mix of cool- and warm-season grasses and broadleaved plants. European immigrants moved onto these prairies, bringing with them the plow. Diverse prairies soon were turned under with tillage, which crushes, smashes and pulverizes soil aggregates.

The tillage continued over many decades, and along with it came the widespread practice of monoculture grain production. Not just monocultures but fewer and fewer crop species as well. Where once grew more than 100 species, now only a few grow. Overall, just 15 crops supply approximately 90 percent of the plant-based foods we eat today. The early settlers ate a much more diverse diet than we do.

We can see the loss of species diversity in our commercial vegetable production, too, where we lost well over 90 percent of our vegetable seed varieties during the 20th century. In 1900, nearly 550 varieties of cabbage were available in the United States; today only 28 varieties are sold commercially. With beets, the change is from 288 varieties to 17. For cauliﬂower, from more than 150 to only nine. And corn? I hate to tell you, but we have lost over 96 percent of the corn varieties available at the start of the 20th century.

Soil scientist Wendy Taheri recently has discovered that many of today’s "new and improved" grain varieties do not have the ability to form symbiotic relationships with mycorrhizal fungi. These varieties are not able to take advantage of all the beneﬁts that fungi have to offer. Breeders have been selecting for traits such as yield and not noticing that in the process other traits — such as the ability to form relationships with fungi — are lost. It’s not that surprising, because plant breeders develop and propagate new varieties in sterile soil. The roots never have been exposed to mycorrhizal fungi, thus it goes unnoticed when a variety does not develop the ability to interact with fungi. Those varieties will be fully reliant on applied synthetic nutrients.

These are the same nutrients that plants need in order to ward off disease. A lack of these nutrients can lead to a higher incidence of fungal diseases. An increase in fungal diseases leads to an increased use of fungicides. Fungicides are detrimental to soil biology and pollinators. Yes, pollinators! Recent studies show that fungicides, once thought to have no ill effects on bees, do have an impact. Scientists and corporate executives have to acknowledge that these compounds are having greater harmful effect than we realized. Farmers need to be educated on better methods, and consumers have to demand that the use of these fungicides is discontinued.

The lack of nutrients available to the plant also makes the plant more susceptible to pests. An increase in pest pressure leads to an increased use of pesticides. Of course, the majority of pesticides are not pest-speciﬁc, which means many beneﬁcial insects will be killed also, including pollinator species, such as bees, that are needed to pollinate our crops. Almost all fruits and vegetables grown on conventional farms today are sprayed with copious amounts of insecticides. Is it any wonder that we have such a dysfunctional ecosystem?

From a livestock perspective, the goal of producing more and more pounds per animal led to raising animals in conﬁnement. Dairy cows and beef cattle were taken off pasture, where they once beneﬁted the ecosystem by grazing living plants, thus cycling more carbon. Instead, today they are raised in conﬁned quarters. Their diets were changed by the all-knowing authorities from forages to high-starch grains, affecting the animals’ health and longevity. Most dairy cows raised in conﬁned high-production systems have a lifespan of less than four years. And the milk, cheeses and other dairy products from this system are much less nutrient-dense, which is impacting human health as well.

The high starch rations fed to beef cattle in feedlots negatively impacts the life of the animals, too, as well as the nutritional value of the beef itself. Take the example of omega fatty acids. Research has shown that foods with a lower ratio of omega-6 to omega-3 fatty acids are better for human health, and research also has shown that grassfed beef has that low ratio, whereas grain-fed beef has a much higher ratio of omega-6 to omega-3 fatty acids.

The feedlot industry has nothing to do with the cattle business. Feedlot operations are in business to market feed and pen space. They want cattle that will eat a lot of feed and take a long time to ﬁnish; that’s what is in their best ﬁnancial interest. Does anyone truly believe that grazing animals prefer to be in a feedlot? Just open the gate and see what the animals choose.

The industry moved hogs, chickens and turkeys into buildings in the ruse that the animals would be "better off." Did anyone ask the animals? Back in 1983, when Shelly and I ﬁrst moved to the farm, I took a part-time job at a nearby egg operation. My job duties included cleaning dead hens out of the cages. I started every morning at 6 a.m., kneeling on a trolley, pulling myself alongside the rows of cages, which housed over 20,000 hens, elevated above tons of fecal material. Nine hens were crammed in a 3-foot by 3-foot cage, living their lives in an area where they could hardly turn around, never seeing or feeling the outdoors. I wondered about how they must feel, never having the opportunity to scratch through the leaves or catch a grasshopper. They had no opportunity to be a chicken! Right then and there I vowed never to have chickens, at least not chickens in conﬁnement.

The U.S. government has propagated this mindset with its cheap food policy. It wants to ensure that citizens have an abundant supply of cheap food. Notice I did not say nutrient-dense food. The United States spends more on health care than any other country in the world, and yet its citizens are not healthy.

Are farmers and ranchers to blame for all this? No, not entirely, but we need to take our fair share of the blame. The American public needs to take their part of the blame as well for allowing this to happen. Through their buying dollars, consumers have made the choice that they want this system, even as they choose to ignore the environmental degradation, the mistreatment of animals and the overall decline in human health.

And think of what else this production model has caused. It has led to tighter and tighter margins for producers. Lower margins mean producers must farm more and more land to make ends meet. Farm sizes increase, leaving fewer farms overall and fewer people operating the land. In other words, this production model has also led to the demise of many of our small towns. Consider these facts:

From memory and records since 1949: From where I sit at this computer, there were four occupied farmsteads along the mile of road to the north and a schoolhouse at the end of that mile, to the south within half a mile was the schoolhouse where I and four others started kindergarten in the fall of 1950 (one later became head of neurosurgery at Yale) and an occupied farmstead within the next half mile and three-quarter mile east and west. Even tenant farmers had a connection to the land, not as strong as owner operators, but a connection. I don’t think anyone had ﬁgured out how to drain our side hill seeps (wet area) with tile. That came during the decade, but most didn’t think they could afford the cost for another ﬁfteen to twenty years. The local weekly paper always had at least one farm sale during the winter and early spring months from the mid-1950s until the mid-60s. There was cost-share assistance to apply lime and seed alfalfa/grass in the early ’50s. This all began to change during the ’60s. NPK became readily available. Atrazine for corn and Amiben for soybeans were introduced. Out-of-county or out-of-state investors began to purchase land that had been marginal, tile out wet areas and clear trees and crop-share or cash-rent it for row crops. Proﬁt from the rent or proﬁt from the inﬂating land value drove the change. I remember one day watching a 24-row planter work on some adjoining land and realized what the American Indian must have felt when the white man showed up. The land ethic gathered dust on a shelf somewhere. Change (technology) came faster and with more force (proﬁt) than humans could handle intelligently.

Are feedlots the ingredient to an ethical beef industry?

How a Big Mac becomes sustainable