So we already knew that watching too much TV dulls the mind and costs a bundle (my cable bill is $170 a month, including Internet and phone).

Now we know, thanks to a new report from the Natural Resources Defense Council, that your super-snazzy, set-top box and DVR combo that means you will never have to miss another episode of "Two and a Half Men" is costing you more money, wasting energy and generating carbon emissions.

With more than 80 percent of Americans now subscribing to cable, the numbers taken as a whole grow pretty big, the NRDC says:

In 2010, the electricity required to operate all U.S. set-top boxes was equal to the annual household electricity consumption of the entire state of Maryland, resulted in 16 million metric tons of carbon dioxide emissions, and cost households more than $3 billion.

They aren’t as startling on a house-by-house basis; each box, on average, costs about $18.75 a year to operate, depending on local electricity prices. But much of that money, it turns out, is wasted. About two-thirds of the energy consumed by the set-top is used when no one is watching TV or recording programs.

Set-top boxes are the ultimate home energy vampires, silently sucking significant amounts of energy and money when nobody’s using them. The consumer, who pays the electric bill, deserves technologies without hidden costs.

On his blog, Noah goes on to say:

The biggest finding from our field work was that the only way to really turn these boxes off is to unplug them — not an attractive option. For almost all the boxes we tested, hitting the power button simply dims the clock or display. For a typical DVR, instead of consuming 30 Watts when on, the box used 29 Watts, only the difference of one Watt.

The problem here, as it is with many wasteful practices in the economy, is a split incentive between the owner and the user. (Economists call this a principle-agent problem.) It’s the reason why a landlord doesn’t care how inefficient an air conditioner is if the tenant pays the bill, and why few people dining out on an open-ended expense account pay much attention to the bill. In this case, the cable operator (Comcast, Time Warner) or phone company (Verizon, AT&T) that buys the set-top box doesn’t pay the electric bill, and so they have no reason to design, build, buy or demand a more efficient box. Markets aren’t working the way they should.

To put this into perspective, here’s a chart from NRDC: 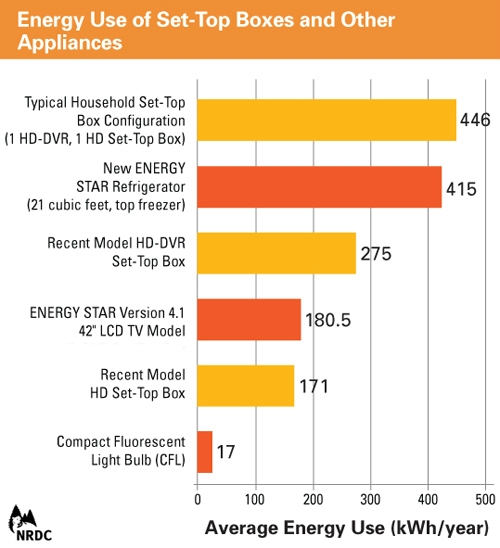 So what’s to be done? Ideally, align the incentives to drive efficiency. By email, Noah told me that “NRDC is working with local utilities to explore the possibility of providing rebates to the service providers” — i.e., the cable and phone companies — who deploy set-top boxes that meet the highest standard, Energy Star 4.0.  Utilities are interesting in efficiency, at least in deregulated markets, because it saves them the expense of building new power plants. NRDC also wants to “engage with set-top box manufacturers,” he said. For their part, consumers can request an Energy Star 4.0 box.

I emailed Motorola Mobility, a major manufacturer of set-top boxes (and a leading maker of environmentally-friendly phones) for comment. A spokesman replied by email:

Motorola Mobility has developed low-power modes for our latest line of set-tops, bringing significant energy reductions. We have set a requirement for all new designs of our set-tops for the U.S. market to meet the latest U.S. EPA’s ENERGY STAR standard.

So it sounds like the industry is moving in the right direction.

What the industry really needs to figure out is how to provide dramatic energy savings when a box is not actively in use, while preserving the ability to refresh quickly when the user returns. The ideal model, of course, are cell phones, which are always able to receive a call or email (and) use very little power in standby mode.

Here’s an even more radical idea. Cut cable altogether. You’ll spend more time with your family, read more books, get outside and save money. I’m not there yet, unfortunately, but as soon as I can watch big league baseball (including my hometown Nationals) and ESPN on my iPad, I’ll cut the cord myself.