Buying renewable energy is hard. Often it requires a lot of upfront capital, and the contracts are too complex or far-removed from core business functions for commercial and industrial companies to complete. Moreover, local electricity policy in many U.S. markets makes buying renewable energy inaccessible to businesses.

Despite these difficulties, more companies than ever are voluntarily jumping on to the renewable train. In 2015 alone at least 3.23 GW of new renewable power capacity was added by corporate buyers, enough to power the lights of more than 2.5 million homes. This trend is due in no small part to the help of the non-governmental organizations that provide clarity to this landscape.

The supply side of companies having access to renewable energy projects in the U.S. is not what is holding companies back. "Frankly, I think the market is oversupplied, if anything," said Managing Director of the Business Renewables Center Hervé Touati. And, as explained in the GreenBiz run-down "The business guide to green power: 12 ways to invest in renewable energy," there are plenty creative ways for companies to buy renewable energy.

But even as the benefits of going renewable are becoming rapidly clearer, as the pool of companies that can produce renewable energy becomes saturated and as a proliferation of methods of buying renewable energy are developed, the process of getting deals done remains murky.

In the past two years in particular, a slew of non-profit groups has rushed in to remove the obstacles on the demand end. Many groups focus on merely getting companies on board and to the table by encouraging corporate commitments to renewable use goals. Others provide education around financing or risk allocation, or even lessons that may resemble Electricity 101. And others still facilitate meet-ups where buyers, suppliers and distributors can all be in the same room.

But as well intentioned as these NGOs are, the sheer influx of the groups, and the accompanying barrage of acronyms, can obscure the landscape, especially considering that the NGOs often partner with one another on initiatives. Furthermore, at first glance, it can seem as if there may be a duplication of services between the organizations.

Here is a field guide to some of the most influential groups out there — each one's particular purpose, area of expertise, affiliations and membership — to make the pursuit of renewables that much easier.

RE100 is a coalition of international companies that publicly pledge to procure 100 percent of their electricity from renewable sources of energy (the timeline for doing so, however, is up to the individual companies).

Joining RE100 is a way for a company to draw a line in the sand, allowing it to clearly signal to the world its commitment to climate leadership, join the ranks of other ambitious companies and the privilege of bandying the RE100 logo. The campaign also functions as a platform for members to share knowledge on how to best go renewable in different market contexts.

Fine print: Companies cannot fulfill the RE100 promise with carbon offsets because the stipulations are strictly about electricity use. And although a company can buy (unbundled) RECs to fulfill its claims — such as buying credits from a renewable energy supplier without actually using the electricity produced itself — companies are encouraged to procure their own energy through either onsite installations, PPAs or virtual PPAs in order to enable new projects to get off the ground.

This encouragement acts both as a motivation for companies to leave their utilities, and practically means that only companies that can take on the financial risk of procuring their own energy practically can sign onto RE100. 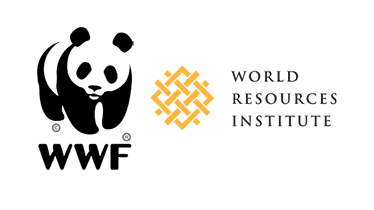 The Corporate Renewable Buyers’ Principles is a manifesto that articulates the renewable energy purchasing desires of the companies that have signed on. It was written in a collaborative effort by WRI and WWF and is adopted by 58 of some of the world’s biggest companies.

The signatories have set internal renewable energy commitments that collectively add up to buying at least 44 million MWh of renewable energy annually in the U.S. by 2020. This boost in visibility of buyer demand encourages the regulatory changes necessary for utilities to take advantage of this market demand.

From a company’s perspective, the Corporate Renewable Buyer’s Principles are similar to the RE100 for signaling a commitment to renewables, but it is easier to sign onto since the company doesn’t have to achieve a very aggressive — and public — goal. Rather, it is a tool to get companies on the path to setting their own renewable energy targets.

The Business Renewables Center is a program of the Rocky Mountain Institute that convenes corporate buyers, service providers (including brokers, law firms, software support and financial institutions) and project developers. With 131 members to date, this large network functions as a go-to place for large companies to get in touch with the organizations and companies that will advance the transaction process.

The BRC develops tools for use by all of its members. Some include the BRC Online Marketplace, where project developers can post projects that are ready to be sold. The BRC also provides price comparisons between wind and solar projects against the wholesale market by location. It also hosts two conferences a year (one of which is REBA). Mostly recently, the BRC has begun to organize boot camps in Aspen, Colorado, for buyers that do not have deals yet in order to train them on how to do a transaction step-by-step.

The driving objective of the BRC is to add 60 GW of wind and solar capacity to the U.S. grid by 2030.

Compared to the other groups named here, the BRC has a more specific energy procurement focus because it only facilitates corporate purchasing of off-site, large-scale wind and solar energy projects in organized wholesale markets. This means that the BRC helps companies sign PPAs for wind or solar projects in areas where a company can do so without conflict with their utility (as opposed to being forced to defect from the utility for such a project, as is the case in vertically integrated utility systems.)

Despite this focus — or perhaps because of it — the BRC boasts that 91 percent of renewable energy deals in 2015 involved a BRC company.

Get ready to go one deeper with REBA. It is an association of other corporate buyers’ associations: Namely, the BRC, WWF’s and WRI’s Corporate Renewable Buyer’s Principles and BSR’s Future of Internet Power initiative (which is a group of companies that rely on data centers that are committed to using 100 percent renewable energy).

The three buyers’ associations convene members of their individual multinational corporate members during the yearly REBA summit in order for the groups to work in an organized and coordinated manner, to minimize the chance of service redundancy and to develop a game plan for the U.S energy landscape as a whole. WWF and WRI focus on the vertically integrated utility territories while RMI’s BRC focuses on organized wholesale energy markets. Note: the individual corporate members of each of the NGO initiatives aren’t technically members of REBA.

In bringing together over 60 of some of the largest multinational companies in the world, REBA leverages incredible collective influence to signal to other companies, energy providers and the greater public that the corporate renewable energy buying movement is rapidly expanding.

Who are the members of these groups?

In the chart below, I’ve listed the companies that belong to each of the groups described above. I’ve also included the 154 companies that made pledges to the Obama administration’s American Business Act on Climate — representing more than $4.2 trillion in annual revenue — that effectively voiced support for the COP21 Paris agreement, and most of whom have set renewable energy targets.

I’ve shaded the companies that appear in three or more groups; one color per company. (Click on the image to see the full chart.) 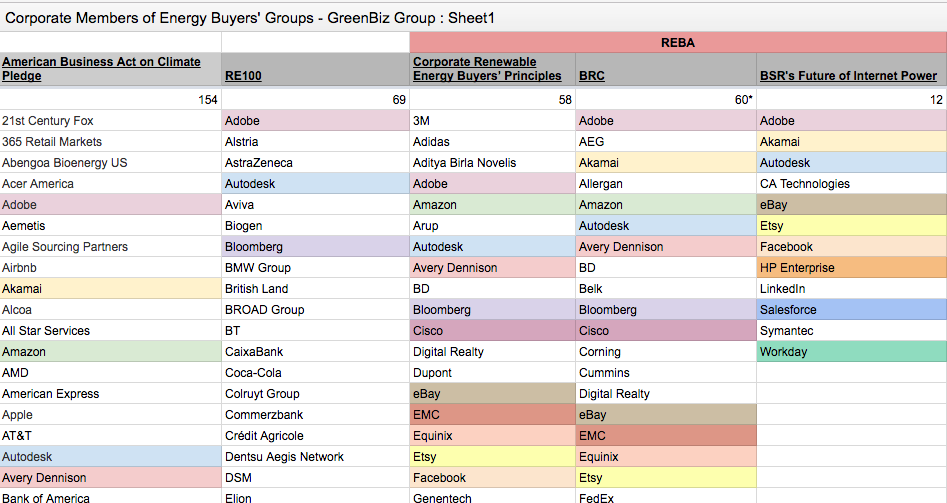 As is evident from how colorful the sheet is, many of the same companies are members of these groups.

On the one hand, this may be evidence of how the NGOs are making an effort to work in congress to galvanize member support for renewable energy buying. A company can set a goal with one group and then get advice on how to achieve it with another, or vice versa.

But on the other hand, though some of the world's largest company's are represented in the chart above, the repetition of names may indicate that the conversations still only circulate among a certain set of companies. This may be due in part to prohibitively high membership fees, or the inability for smaller companies to take on the financial risks that would be necessary for joining a certain group. Renewable contracts have yet to become the norm, and it remains a question whether these groups are providing resources that can service the more mainstream — Fortune 500-1000 — companies, which is where the bulk of energy use it found.