Youth are calling for immediate climate action, and majority of Americans agree

Two-thirds of Americans believe climate change is either a crisis or a serious problem, with a majority wanting immediate action to address global heating and its damaging consequences, major new polling has found.

Amid a Democratic primary shaped by unprecedented alarm over the climate crisis and an insurgent youth climate movement that is sweeping the world, the polling shows substantial if uneven support for tackling the issue.

More than a quarter of Americans questioned in the new CBS News poll consider climate change a "crisis," with a further 36 percent defining it as a "serious problem." Two in 10 respondents said it was a minor problem, with just 16 percent considering it not worrisome at all.

More than half of polled Americans said they wanted the climate crisis to be confronted right away.

More than half of polled Americans said they wanted the climate crisis to be confronted right away, with smaller groups happy to wait a few more years and just 18 percent rejecting any need to act.

"Americans are finally beginning waking up to the existential threat that the climate emergency poses to our society," said Margaret Klein Salamon, a clinical psychologist and founder of the Climate Mobilization Project. "This is huge progress for our movement — and it’s young people that have been primarily responsible for that." 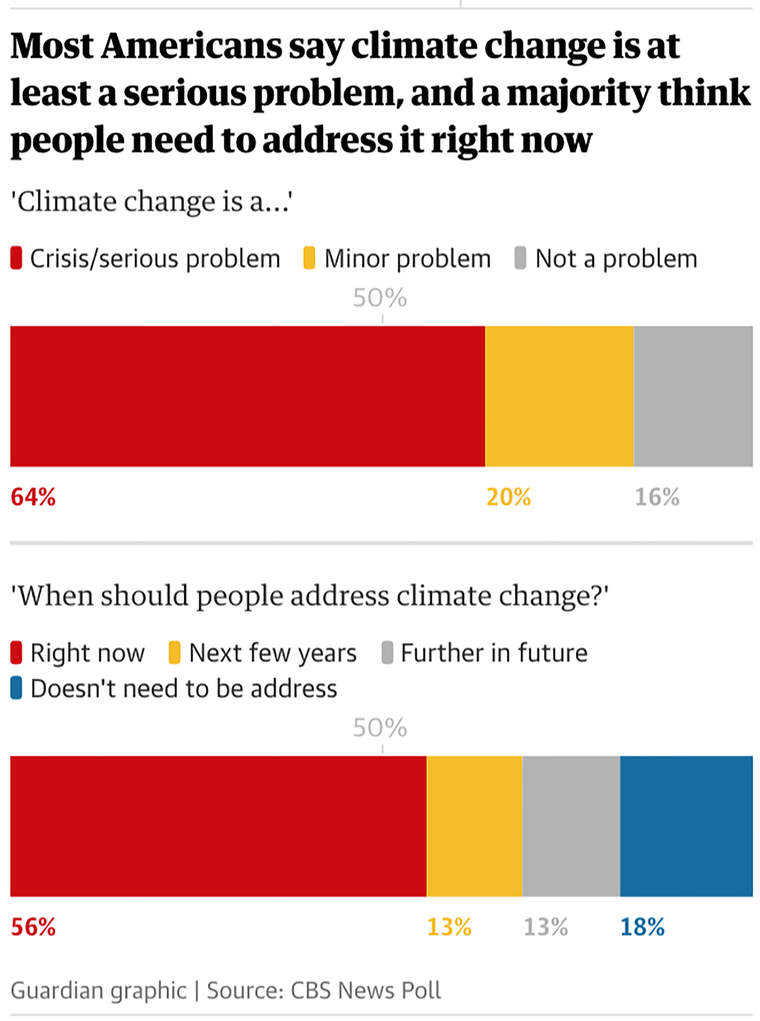 But while nearly all of those questioned accept that the climate is changing, there appears to be lingering confusion over why and scientists’ confidence over the causes.

There is a consensus among climate scientists that the world is heating up due to human activities such as burning fossil fuels for electricity generation and transportation, as well as cutting down forests. However, just 44 percent of poll respondents said human activity was a major contributor to climate change. More than a quarter said our impact was minor or nonexistent.

There is an even starker split on the findings of climate scientists. According to the CBS poll, 52 percent of Americans say "scientists agree that humans are a main cause" of the climate crisis, with 48 percent claiming there is disagreement among experts.

"This remains a vitally important misunderstanding — if you believe global warming is just a natural cycle, you’re unlikely to support policies intended to reduce carbon pollution, like regulations and taxes," said Anthony Leiserowitz, director of the Yale Program on Climate Change Communication, which has made similar findings in its own, long-running polling.

"These results also again confirm a longstanding problem, which is that many Americans still believe scientists themselves are uncertain whether human-caused global warming is happening.

"Our own and others’ research has repeatedly found that this is a critical misunderstanding, promoted by the fossil fuel industry for decades, in order to sow doubt, increase public uncertainty and thus keep people stuck in the status quo, in a ‘wait and see’ mode."

Similar to previous polls, the CBS research finds sharp ideological differences in attitudes to the climate crisis. While nearly seven in 10 Democratic voters understand that humans significantly influence the climate and 80 percent want immediate action, just 20 percent of Republicans think humans are a primary cause and barely a quarter want rapid action.

On the science, nearly three-quarters of Democrats said almost all experts agree that humans are driving climate change, with just 29 percent of Republicans saying the same.

While 70 percent of 18- to 29-year-olds think climate change is a serious problem or crisis, just 58 percent over 65 concur.

Age is another key variable. While 70 percent of 18- to 29-year-olds think climate change is a serious problem or crisis, just 58 percent over 65 concur. Younger people are far more likely to consider it a personal responsibility to address the climate crisis and to believe that a transition to 100 percent renewable energy is viable.

Young people have been galvanized by climate science being taught in schools as well as a spreading global activist movement spearheaded by Greta Thunberg, the Swedish teenager who started a wave of school walkouts to demand action. Thunberg recently arrived in the United States on a solar-powered yacht ahead of a major United Nations climate summit Sept. 23 in New York. 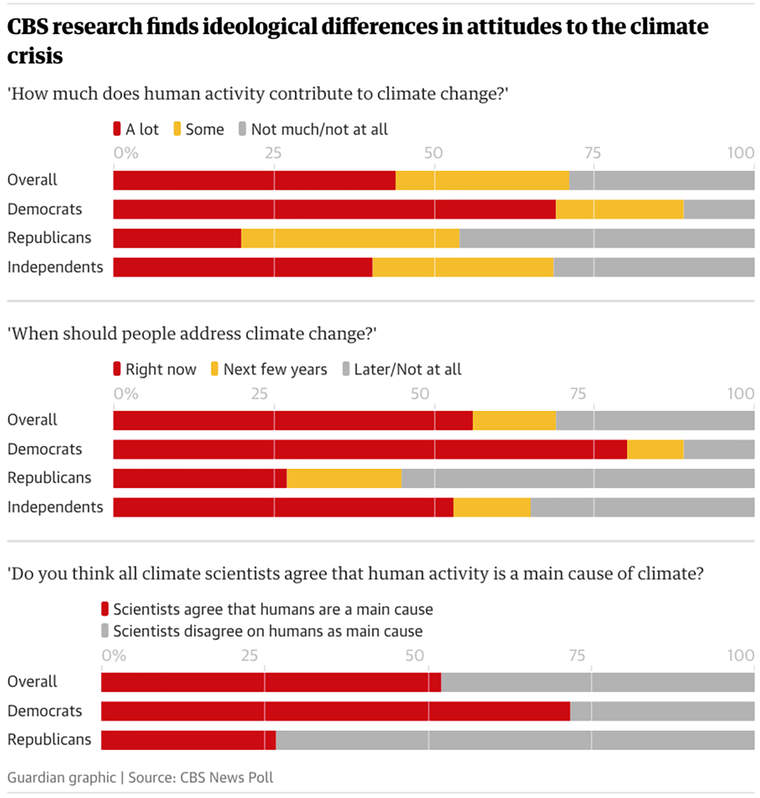 This generational divide even cuts across party affiliation, with two-thirds of Republican voters younger than 45 considering it their duty to address the climate crisis, according to the CBS poll. Just 38 percent of Republicans older than 45 feel the same.

"Younger Republicans are much more convinced climate change is a crisis and are supportive of action than older Republicans — which has big implications for the future of the party," said Leiserowitz.

Around three-quarters of all respondents said they understand that climate change is melting the Arctic, raising sea levels and causing warmer summers. A further two-thirds accept that hurricanes will be made more severe by global heating. Hurricane Dorian, which recently devastated parts of the Bahamas, made 38 percent of Americans more concerned about the climate crisis, with 56 percent unswayed.

Leiserowitz said that the relationship between extreme weather events and concern over climate change is a complex one, with people already worried the most likely to say that their alarm has increased when a major storm or flood hits.

Regardless of concern over climate change, there appears to be skepticism among Americans about how much humans can do about it. Just 19 percent said humans can stop rising temperatures and the associated impacts, with nearly half thinking it possible to slow but not stop the changes and 23 percent refusing to believe humans can do anything at all.

This may well influence the views of leading presidential contenders’ climate plans. Democratic hopeful Bernie Sanders, for example, has proposed a rapid remodeling of society where planet-warming emissions from transport and power generation are eradicated within just 11 years.

"By saying we should merely slow and not reverse global warming, we are passively accepting the deaths of billions of people," said Salamon, of the Climate Mobilization Project.

"The only thing that can protect us is an all-out, all-hands-on-deck mobilization, like we did during the Second World War. Avoiding the collapse of civilization and restoring a safe climate should be every government’s top priority — at the national, state and local levels."

See all by Oliver Milman