Social distancing measures are in place but these organizations are still engaging in collective action.

If you’re reading this, you know today — April 22, in case you needed a reminder of the date — marks the 50th anniversary of Earth Day. For some, this would have been a day to take to the streets, if it weren’t for the stay-at-home orders in place across the United States and the world to control the spread of COVID-19.

"We were planning on having something very similar to Sept. 20, where we were hoping to have ... tens of thousands people demonstrating in the streets," said Sarah Goody, a youth activist who is part of the lead circle for Youth vs. Apocalypse, a network of young climate justice activists in the San Francisco Bay Area.

Youth vs. Apocalypse's original plan was to hold a demonstration in San Francisco that would have been similar to the Global Climate Strike last September, when it was estimated that millions took to the streets all over the world to demand action on the climate crisis. (Other youth-led organizations had the same idea, announcing a three-day strike back in January.)

But Goody said while social distancing has made on-the-ground demonstrations this week impossible in most places, it was still important to hold a strike digitally, which is in line with Earth Day Network's call to mark the anniversary via online channels.

Earth Day is a chance to come together as a global community and show ... the people in charge how important recognize recognizing the climate crisis is to us and finding viable, just solutions.

"Earth Day is a time to celebrate all the work we've been doing and all the efforts we've made in order to fight for a just future and for a just planet," Goody said. "I see it as the chance to come together as a global community and show our government, our leaders, the people who are in charge, how important recognize recognizing the climate crisis is to us and finding viable, just solutions."

Youth vs. Apocalypse is organizing a three-day strike starting today. Each day of the series has a different focus, but there is one throughline: "Our main theme is that no one is disposable. And I feel like that's so relevant with everything that's going on right now ... between the climate crisis, and the coronavirus pandemic, and all other life crises that we face in our society," said Cemre Gonen, a youth climate justice activist involved with Youth vs. Apocalypse.

The organization is encouraging youth — and adults — to encourage people to make art in their homes, paintings, dances, music, Tik-Tok videos or even just selfies and posters to share on social media under specific hashtags — #nooneisdisposable for the duration of the three days. It is encouraging participants to support the specific calls to action that change from day to day.

For example, while the strike is not geared toward business participation per se, on Thursday, it is targeting financial institutions and businesses to divest from the fossil fuel industry.

(To hear about how companies are commemorating the 50th Earth Day, listen to Friday's GreenBiz 350 podcast.)

"I think that companies need to treat climate change as a corporate responsibility issue instead of a public relations necessity. And I think we've seen this with a lot of companies, ones like BlackRock, who for many years did a lot of greenwashing," said Goody, whose organization has called on the investment management company to divest from fossil fuels.

Goody acknowledged the company's relatively recent announcement that it would do just that, which made headlines weeks after the youth network protested outside the company's doors in San Francisco. 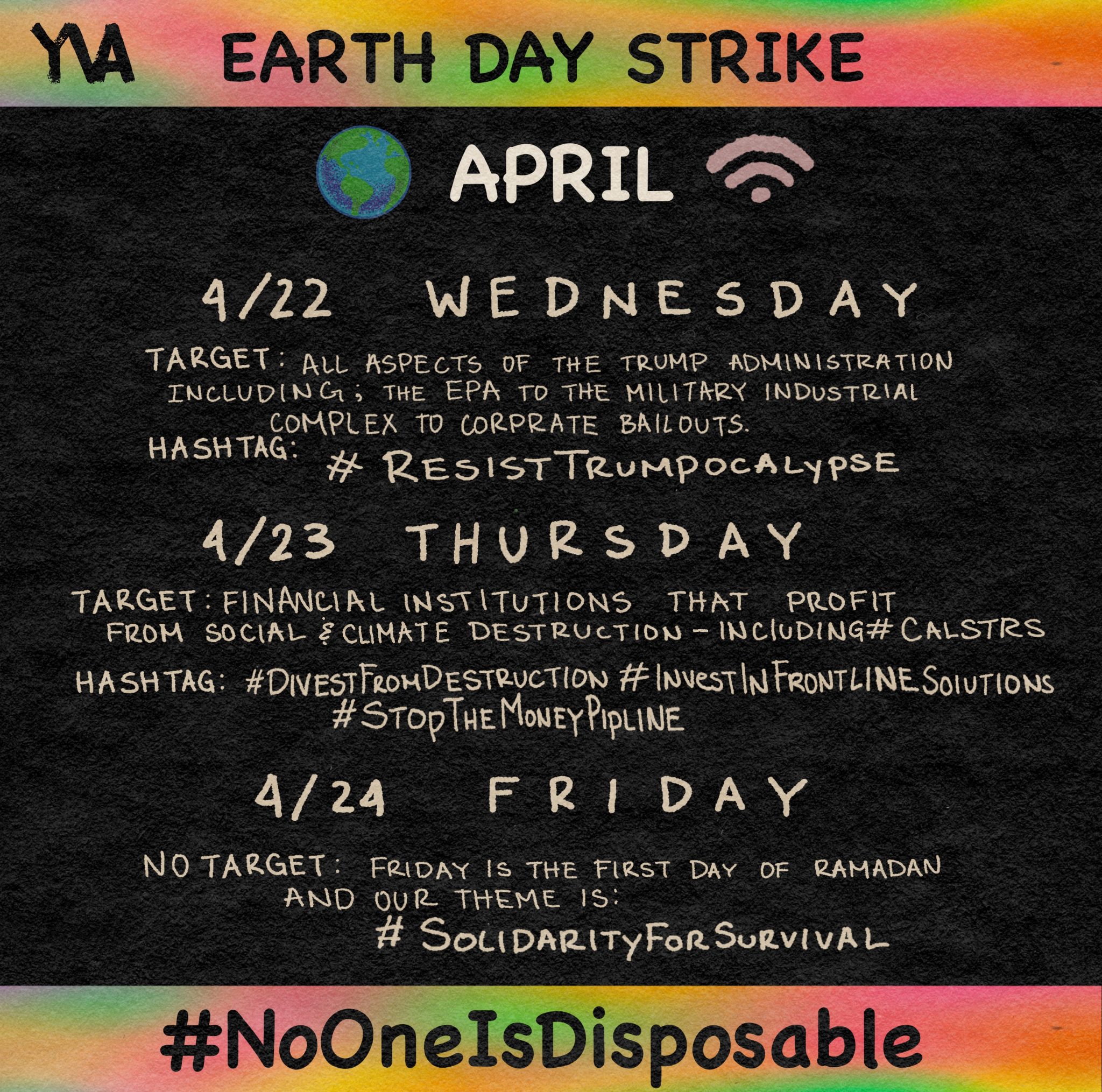 On a larger scale, U.S. Climate Strike Coalition and Stop The Money Pipeline Coalition, which together are made up of over 500 organizations — including numerous youth-led organizations such as Sunrise Movement, International Indigenous Youth Council and Fridays for Future —  came together to organize Earth Day Live, another three-day series, which the Earth Day Network is working to support. The online event includes a livestream of talks and performances that start at 9 a.m. EDT and run into the night.

Here’s a sampling of what the days have to offer: There’s a session called "When Kids Fear Rain: A Conversation on Climate Disasters" on Earth Day. On Thursday, Youth vs. Apocalypse plans to release a No One Is Disposable music video, and on Friday, there’s "Spill The Tea with [Rep. Alexandria Ocasio-Cortez]: A Conversation on the Green New Deal."

"Our goal is to recreate the feeling of attending an in-person mass mobilization but in the virtual world," said Naina Agrawal-Hardin, Sunrise Movement organizer, in a statement. "That means dynamic speakers, the chance to meet people you don’t know, an opportunity for direct action — and yes, we still want you to make a protest sign. Social distancing doesn’t mean that we can’t still engage in collective action."

The circularity news we’ll be following in 2023

Want to avoid greenwashing? Be clear about what it means

Circular Services is poised to expand the circularity ecosystem

How a Washington initiative is creating a just circular economy