These appetites to increase the amount of wind and solar energy in particular should be inherently complementary. A small group of large, cash-rich companies — Apple, Walmart, Google and others — are increasingly investing in off-site clean energy projects.

For other businesses, however, convoluted deal structures, lacking manpower and a jigsaw puzzle of state and local policies related to energy procurement have created a hard-to-crack stalemate. Herve Touati, managing director of the Rocky Mountain Institute's Business Renewables Center (BRC), has seen these obstacles play out first hand.

"The typical buyer will receive one or two or three emails a week," Touati recently told GreenBiz. "Unless you are Google and you have a big team, if you are one sustainability manager in a large company, what do you do with those emails?"

That's why his organization has created the BRC Marketplace, an online platform designed to function as a matchmaker between clean energy project developers and companies interested in getting involved.

“If you want a wind farm, 50 Megawatts near Chicago, you go on our platform and you search for a developer," Touati explained.

Once on the platform, users can search for wind, solar or other types of energy projects and tailor their results based on desired capacity, contract term, how far along the project is and whether actual electricity or only Renewable Energy Credits (RECs) are available for purchase. 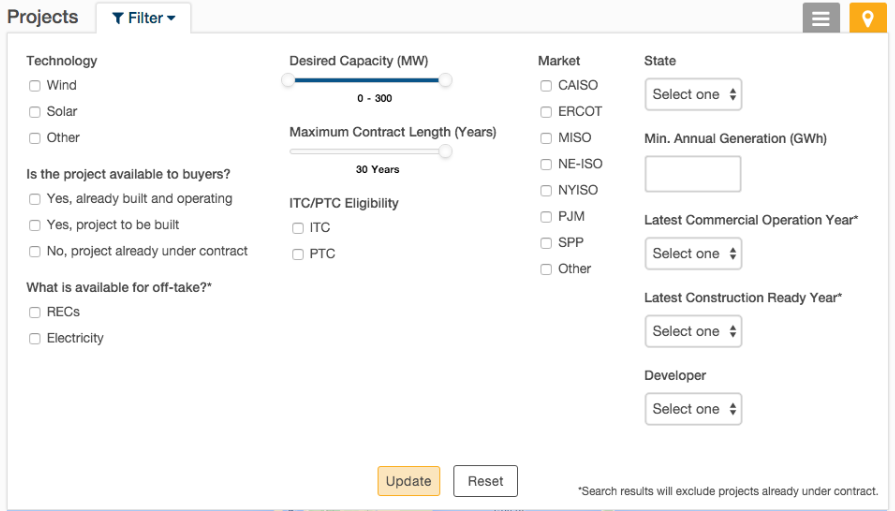 The release of the product comes as NGOs, corporate sustainability departments and energy industry players seek ways to increase the amount of capital flowing into the renewable energy sector — an investment prospect made more complicated by the dizzying array of complex deal structures available to corporate buyers.

The BRC was launched in February alongside an increasing number of corporate climate action initiatives from the likes of the World Wildlife Fund, CDP, the RE100 and We Mean Business.

At least initially, the new BRC Marketplace platform will be limited to the group's members, a roster that currently includes more than 60 companies, such as Autodesk, FedEx, Sprint and Starwood Hotels. There are no sector or size requirements for member companies.

The goal is to lower the barrier to entry for corporate renewable energy investment by greasing the wheels at the early stages of project planning, leaving the regulatory and financial haggling for later.

"There’s variation regionally across the different wholesale markets, but the niche we’re trying to fill is at the earlier stage," said Ian Kelly, a senior associate in RMI’s electricity practice.

Once a potential match is made, the membership organization is happy to leave the haggling over Power Purchase Agreements (PPAs), virtual PPAs, RECs or other financial and logistical arrangements up to the lawyers, consultants and third party brokers often enlisted to complete large-scale renewable energy projects.

"We don’t complete the transaction ourselves, so we are not trying to compete with the brokers," Touati said.

The idea for the BRC Marketplace arose at the organization's last meeting of member companies in May. The release of the platform this week is timed to coincide with a second biannual workshop held Tuesday in New York.

While the need for a central tool to organize the renewable energy project pipeline emerged fairly quickly, the group had to enlist outside talent to actually build the tool over the last several months.

"We’re not software developers," Kelly said. "That’s not our bread and butter."

Among the diplomatic challenges were getting developers wary of revealing potentially sensitive project details early in the process comfortable with the idea. The next question — who to make project data available to — could evolve over time.

“We’re opening it up to our membership at this point. We welcome more companies joining us," Kelly said, adding that the environmental group also will monitor interest in the tool. "At the end of the day, obviously we want to have the biggest impact we can."

While it remains to be seen how many companies and developers will use the new marketplace, there is also the matter of shifting geographic constraints on clean energy to contend with.

"We believe with in 12 to 24 months that PPAs will be feasible in China," Touati said. "In the U.S. so far we are focused on deregulated markets. Over time, we are going to look more at regulated markets."