What happens when shared transportation, electric vehicles and self-driving cars converge? Automakers and rental car companies are racing tech companies like Google and Uber to find out.

In urban areas like Paris, San Francisco and Boston, there is no shortage of carsharing providers with creatively-capitalized names, from Zipcar and Car2Go to Getaround or City CarShare.

Now, however, the carsharing industry is at a turning point where evolving business models — round trip or one way? free-floating vehicles or cars docked at specific stations? — are poised to collide with parallel breakthroughs in ridesharing, electric vehicles and self-driving cars.

Though big questions remain about demand patterns, who will drive these futuristic cars and what happens to the data collected by service providers, the opening to increase efficiency and ease congestion in a cost-effective way is increasingly compelling for a range of providers.

“This allows flexibility for the operator to serve more people with a single car," Susan Shaheen, director of Innovative Mobility Research at the University of California, Berkeley's Transportation Sustainability Research Center, told GreenBiz.

But who will end up eating whom in the space, and how long might it be until all of these technologies actually come together (if ever) in one comprehensive mobility offering?

These early competitive dynamics have already resulted in automakers rushing to either acquire or partner with carsharing upstarts. Uber, meanwhile, is acquiring its own mapping talent and speculating about autonomous vehicles as Google hones its self-driving cars and tests out new ridesharing apps.

And we're not talking about just a handful of potential carsharing customers at stake. More than 1.5 million people are already using these services in the Americas, according to new research from UC Berkeley: 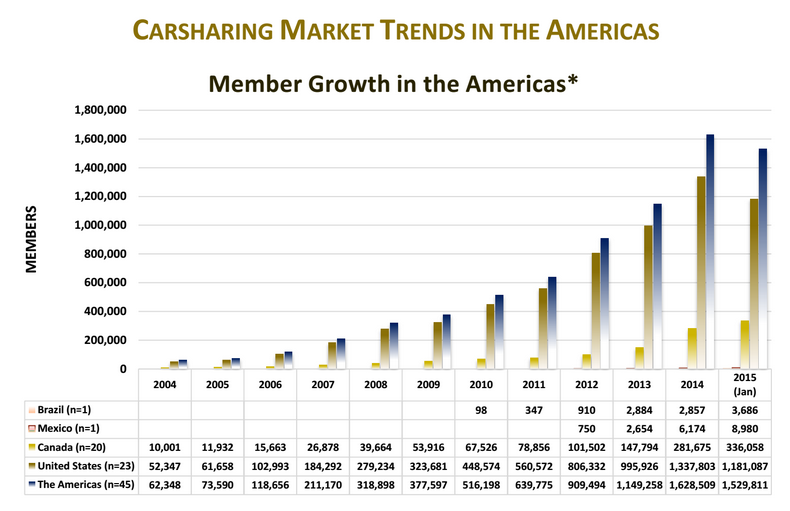 Still, a slight decline in customers from 2014 to early 2015 does underscore just how in flux the industry is.

"For the first time, you see a decline. I’ve already gotten a couple of emails like, 'What does this mean?'" Shaheen said. "It means that a few operators have closed and a few have opened."

While Shaheen's data doesn't include peer-to-peer providers, like Getaround, which declined to divulge their internal numbers, the carsharing space is transitioning from a mishmash of nonprofits, co-ops and a few established businesses to an industry dominated by for-profit players.

With auto industry incumbents now jockeying for position in a segment once relegated to the fringes of the transportation world, the real question is where to from here?

“Does it signal that we’re entering more into a mainstream phase, or a scaling phase or both?” Shaheen said. “It’s very important to look at this as a system, and how to create a more robust and resilient system.”

Over the course of 15 years in business, Zipcar has gained traction by offering reliable short-term car rentals to urban and suburbanites.

The key, which enticed rental car magnate Avis to pay around $500 million to acquire the company in 2013: giving members access to wheels without traditional rental car hassles, like standing in line at a counter or paying for days at a time.

Now, the window for car rentals is getting even smaller, thanks to a boom in immediate gratification on-demand services encouraged by newer competitors like Uber.

Since late last year, Zipcar customers in Boston have also been able to rent cars for one-way trips. They pay in 30-minute intervals and drop the car off at designated stations, where it’s guaranteed that a parking spot will be available.

“Largely that was driven by member demand,” Justin Holmes, Zipcar’s director of public policy and communications, told GreenBiz. “They wanted the flexibility to take a vehicle and leave it in another part of town.”

The one-way pilot started with a small pool of vehicles for employees in late 2014 and has since scaled to 200 vehicles that can be accessed at 400 locations — an expansion reinforcing the growing market for cheaper shared rentals based on even shorter time intervals.

Shaheen’s new research found that as of January 2015, about one-third of carsharing vehicles in the Americas were available as part of one-way carsharing services. There are also multiple other business models being deployed: 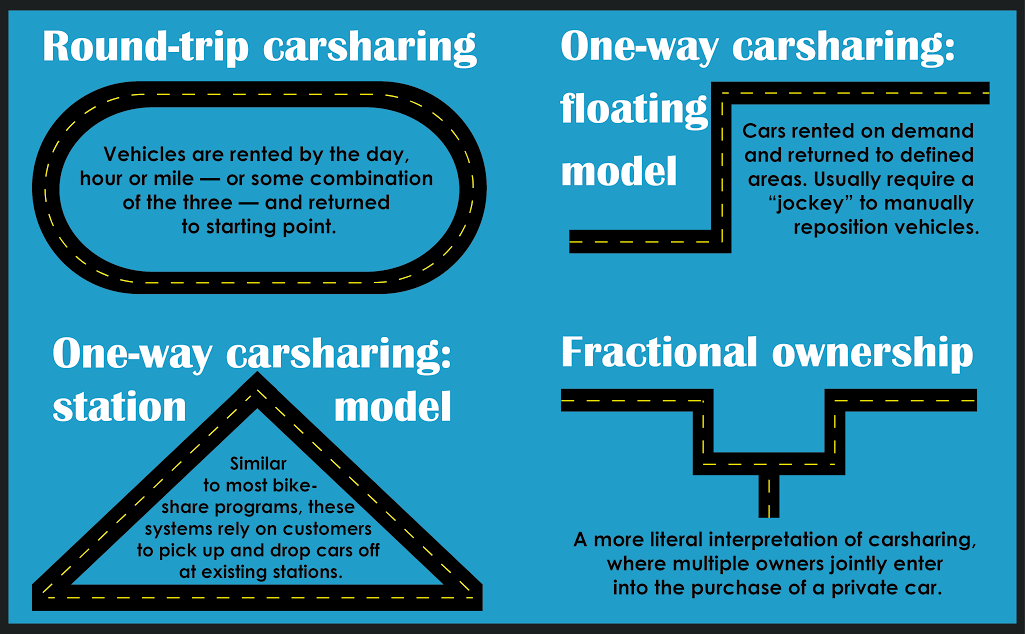 One-way carsharing systems take a cue from existing bike sharing models in many cities, which makes sense given that city planners are increasingly looking to incorporate both types of vehicles into first- and last-mile transportation offerings.

“When you look at bikesharing, the majority of systems are point-to-point, or one way,” Shaheen said. “About 80 percent of those trips are one way. It provides people with a higher degree of flexibility.”

BMW’s DriveNow system, for instance, offers driver’s by-the-minute rentals of electric vehicles in Europe and the San Francisco Bay Area. Costs include a one-time $39 memberfship fee, then $12 for the first 30 minutes of a rental and $0.32 for each minute after.

Car2Go, a one-way carsharing provider acquired by the moovel subsidiary of Mercedes-Benz parent company Daimler AG, has scaled quickly in Europe and North America by offering on-demand rentals of compact cars in urban areas. The company charges a flat $0.41 per minute and lists other fees that can be incurred — $100 for parking in an unauthorized area, $400 for a lost key — on its website.

Those automaker models are markedly different from rental car companies like Avis, Enterprise and Hertz, which have tended to gravitate toward round-trip offerings.

“With the auto rental industry, most of their activity has been more round-trip focused," Shaheen said. "With the OEMs (automakers), the models are not round trip.”

More recently, however, Avis-owned Zipcar has thrown its hat into the ring, along with Enterprise, for a contract with the City of Boston that would make publicly-owned parking spaces available for a network of 150 free floating vehicles.

Holmes of Zipcar said that such a move, which is still being discussed with the city, would further the companies goal of providing "a range of mobility solutions."

Car2Go representatives, meanwhile, said earlier this year that the scope of the proposed pilot in Boston was too small to forge a "reliable service," since fleets in similarly-sized cities have started with closer to 300-400 vehicles.

Shaheen adds that one dual challenge and opportunity when it comes to carsharing is the variation inherent in different local conditions.

"It’s likely that we’re going to see differences that reflect the densities of the cities, along with their public transportation networks," she said.

The economics of carsharing

While futuristic prophecies of adaptable urban transportation networks have floated around for decades, one thing that has remained much less clear is how such systems might actually become economically viable.

The key behavioral mechanism at work, according to Shaheen, is changing how a person or a business pays for transportation.

"You're taking a fixed cost — auto ownership — and turning it into a variable cost," she explained.

Those costs can vary even more depending on the payment terms for different carsharing models. 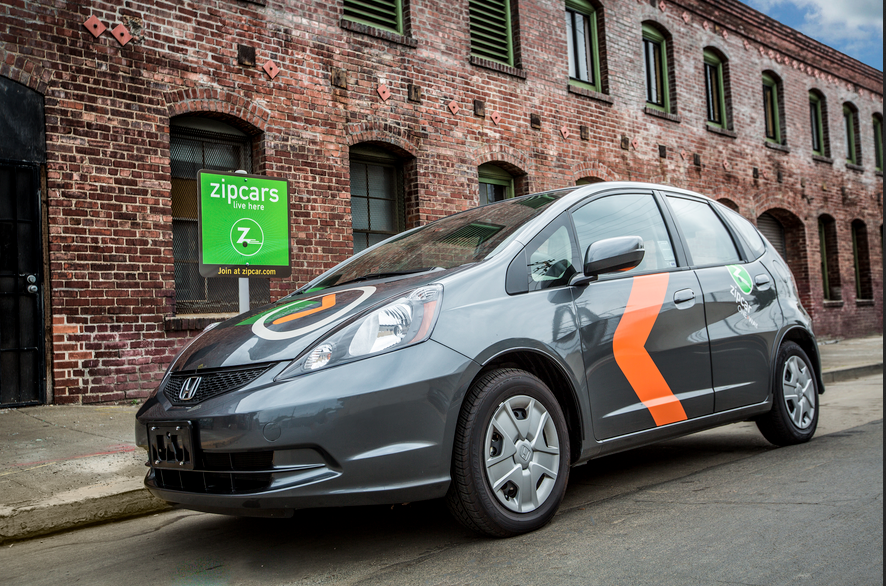 “There’s a definite economic difference. With round trip, you’re paying by the mile or the hour or both," Shaheen said. "With the one-way model, you’re essentially paying by the minute. That also has impacts on behavior."

While white-knuckle drivers racing to return a car they're paying for by the minute conjures up all sorts of safety and liability concerns, a related question is how environmental impacts may vary among carsharing models.

With round-trip models, Shaheen and others have found that more tangible cost structures make users "think differently about their trip making." Her research shows that each shared vehicle in North America reduces the need for nine-13 personal cars.

What's less clear, however, is the effect that one-way carsharing, whether station-based or free floating, has on greenhouse gas emissions or sales of privately-owned cars.

Once those impacts — along with the cost projections for a new generation of longer-range electric vehicles — are more clearly understood, there is the possibility that carsharing providers and sustainable development advocates could use supporting data to lobby for policy changes, like dynamic road pricing or new carpooling regulations.

In the gray area between personal cars and carsharing services, there are also possibilities like "fractional ownership" — a newer framing of older co-op models , where a group of private owners jointly purchase a vehicle. This approach is currently being tested in India by Ford Motor Co.

In another example of an automaker hedging its bets on carsharing, Honda has partnered with Zipcar for its one-way carsharing pilot in Boston. It might seem contradictory given the existential threat to automakers posed by carsharing companies, but the move is intended to appeal to a more targeted audience.

“Some of our strongest partners are automakers," Holmes said. While Zipcar espouses a "car-free or car-light lifestyle” in cities, he said more suburban markets give automakers, "an opportunity to introduce a fleet of vehicles to potential customers."

While the competitive dynamics and environmental impacts of evolving carsharing models remain in flux, other clear flashpoints in the conversation about the future of sustainable mobility are already emerging — particularly when electric cars and autonomous vehicles enter the picture.

The irony for Shaheen and other transportation history buffs is that electric vehicles (EVs) and carsharing are far from strangers.

"They were very, very closely coupled for years, and then decoupled for a decade," Shaheen said. "Now, there appears to be a Renaissance occurring where these innovations are being joined again. Will they also join with the automated vehicle, or semi-automated vehicles?”

While both short-range EVs and carsharing networks have struggled in past hype cycles to achieve scale, the buy-in from incumbent auto industry heavyweights — coupled with a new wave of tech innovation in the form of on-demand software platforms — could change that.

Holmes said that range anxiety is still very much a factor for round-trip carsharing customers, but expanding charging infrastructure, better battery storage technology and lower up-front costs are helping to increase the number of providers investing in EVs.

While powertrain options are one issue that also translate to autonomous vehicles, self-driving cars also introduce a host of other issues. A new generation of privately-owned autonomous cars wouldn't do much to combat traffic, raising the question of how automakers or new entrants like Google may combine the technology with shared mobility services.

One potential upside: fewer first-mile conundrums when it comes time to pick up your shared ride.

"If we are in the world where the car can come to you, that’s going to make carsharing more convenient," Holmes said.

He also acknowledges a range of other obstacles — “clearly, public policy challenges” and avoiding the collection of "data that would be, for lack of a better term, creepy” —  that stand in the way of that scenario.

And while Holmes contends that alignment with public transit is one of Zipcar's "key growth strategies," it is much less clear how a larger provider like Uber or a centralized Google transportation service might interact with mass transit systems.

That's where technology might find its next use, Shaheen theorizes.

"I think that public transportation is a core service and that it needs to exist," she said. "You’re not going to redistribute rail, but you could redistribute a bus line. You could change the size of a bus. You could make it on-demand."