More than 15 years ago, I received some data that changed the way I looked at trash. It came in the form of an obscure presentation by a U.S. Environmental Protection Agency official to a September 1992 teleconference hosted by the Center for Industrial Services at the University of Tennessee.

The document was an eye-opener. According to Jim Lounsbury, then in the EPA's Office of Solid Waste, the pile of trash that had become the focus of public concern — the so-called "landfill crisis" — municipal solid waste, or MSW, comprised only a tiny piece of the overall waste disposal picture. There were several much, much bigger piles of trash created by industrial activity to which no one was paying attention.

I've been writing and speaking about that larger trash pile — which I dubbed the Gross National Trash, or GNT — repeatedly, including in my recent book, Strategies for the Green Economy. As I explained it, MSW — which consists of newspaper, cardboard, yard clippings, bottles and cans, other packaging, and various other things people toss out — represented only about 1.5 percent of Gross National Trash. The rest consisted of a long list of industrial debris, including various manufacturing wastes, construction and demolition waste, sludge, hazardous waste, and many other things. 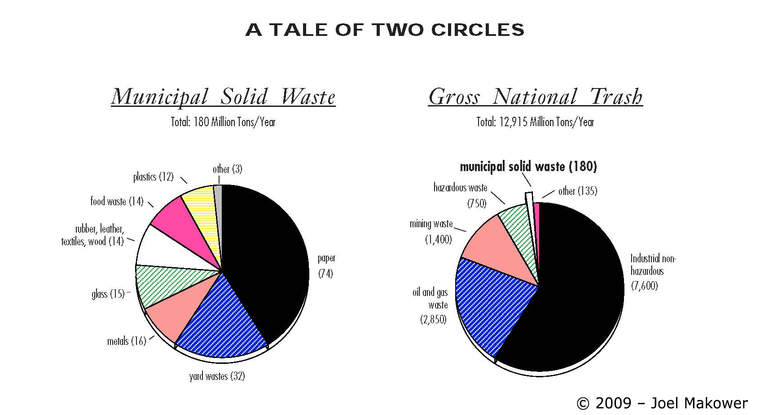 Problem was, that 1992 study was never updated. And while solid waste experts I consulted assured me that the relative amounts probably hadn't changed much, the age of the data bothered me nonetheless.

But I've just stumbled over some much newer data — 15 years newer, to be exact — and while the overall point I was making hasn't changed, the numbers have changed a great deal.

And that raises more questions than answers.

The government — and the rest of us — don't have a clue about how much waste companies produce.

Indeed, it makes me more than a little suspicious.

Here's the gist of the problem. The 1992 data showed that U.S. industry created 13.2 billion tons of GNT. In contrast, MSW that year equaled only 195 million tons — about 1.5 percent of the total.

In 2007, GNT equaled only 2.6 billion tons, while MSW grew to 252 million tons, representing nearly 10 percent of the total.

So, industrial trash dropped by 80 percent, while consumer trash grew by 30 percent. This, during a time when the U.S. population grew by 18 percent (from 255 million to 301 million people) and the U.S. gross domestic product, or GDP, more than doubled (from $6.2 trillion to $13.5 trillion in 2000 dollars).

There are two possible explanations. One is that industry has gotten magnificently more efficient over the past decade and a half, producing a lot more stuff while creating just a fraction of the waste.

The other is that the government — and the rest of us — don't have a clue about how much waste companies produce.

I'm inclined to go with the latter.

Not that the first version doesn't have some merit. Over the past 15 years, companies have gotten much more efficient. For example, in our 2009 State of Green Business report, we tracked year-over-year decreases in the amount of paper and packaging used per dollar of GDP. So, improvements are taking place.

But not to the extent that these data show.

Take industrial non-hazardous waste, for example, a classification that includes effluents from pulp and paper, iron and steel, stone, clay, glass, concrete, food processing, textile manufacturing, plastics and resins manufacturing, chemical manufacturing, water treatment, and other industries and processes. In 1992, the EPA calculated 7.6 billion tons a year of the stuff (39 times more than all of the MSW generated that year). In 2007, says EPA, there was just 214 million tons — a roughly 97 percent decrease (and roughly equal to MSW that year). Where did it all go?

During that same period, hazardous waste — a witch's brew of nearly 500 toxic ingredients found in paints, pesticides, printing ink, and in hundreds of manufacturing processes -- plummeted from 240 million tons a year to just 9.6 million tons, a 96 percent decrease.

You catching a theme here?

What's the point? It's that most of us have been focusing on the wrong pile of trash. The principal concern isn't primarily the roughly quarter-billion tons of MSW that we toss out each year, though that's no trivial sum. It's the much larger pile, somewhere between 2.6 billion and 13 billion tons — or maybe more. No one really knows.

But we need to know. The amount of waste we produce — hazardous or not — has implications on our health, wealth, and well being. It impacts our energy, air, and water, and the production of greenhouse gases, among other things. Its mere presence signals manufacturing and marketplace inefficiencies — processes and trading systems in which the creation of waste is an acceptable, affordable outcome.

That's anathema to an economy seeking to become lean and competitive on the world stage, and to a world seeking to use energy, water, materials, and other resources far more wisely while addressing problems like air and water pollution, food security, and climate change.

But how can we aim our economy in the right direction if we don't know where we are?

There are implications for companies. As I wrote in my book (citing the 1992 data):

It’s only a matter of time before the story of GNT gets told, and the public recognizes that for every pound of trash that ends up in municipal landfills, at least 65 more pounds are created upstream by industrial processes — and that a lot of this waste is far more dangerous to environmental and human health than our newspapers and grass clippings. At that point, the locus of concern could shift away from beverage containers, grocery bags, and the other mundane junk of daily life to what happens behind the scenes — the production, crating, storing, and shipping of the goods we buy and use. And interested parties may start asking questions.

The disparate 1992 and 2007 figures on the Gross National Trash are troubling for us all. For all the talk about competitiveness, environmental responsibility, accountability, and public health, we're missing an important piece of the picture.

By the way, the 2007 trash data I fell into recently have never been published. Nor were the 1992 data collected by an EPA employee, since retired. (You can download the Tennessee teleconference document here in PDF; the data in question are on page 10.) The 2007 data were unearthed by an industrious researcher for a magazine article I recently wrote. So, the EPA is collecting this information — albeit sporadically — but not doing anything with it. Given the seemingly poor quality of the data, that's a mixed blessing.

How much trash does U.S. industry really produce each year? Your guess is as good as mine.

A tale of two circles

Why Waste Is a Profitable Thing to Mind

Which European Country is the Trashiest?