Now for something completely different. (And apologies to my loyal readers on green business and clean technology for this brief diversion.)

This week, my 1989 book, Woodstock: The Oral History, is being re-issued to commemorate the 40th anniversary of the historic music festival. When it was originally published, Rolling Stone called the book "The definitive story of the mega-concert." 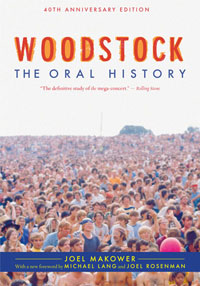 A book on Woodstock? Really? Who knew? Why you?

I've been getting that reaction lately, as I've clued friends and associates in on the book's impending publication.

And the inevitable question: Did you go?

My glib answer: I don't remember.

Woodstock always fascinated me as it became a touchstone for my generation. And it's not disconnected from the work I do today. The festival took place at a time that parallels the birth of the modern environmental movement -- just eight months before the first earth day, April 22, 1970. It helped to coalesce a political wave, born of the civil rights movement and the Vietnam War, that would become the first generation of environmental activism. I was part of that movement. And it was during the publication of my Woodstock book, in August 1989, that I began writing The Green Consumer, the book, published in early 1990, that sent me on my current career trajectory.

The more I learned of the story behind Woodstock, the more fascinating it became. The oral history format was something I was interested in, too. So, during 1988, I crisscrossed the U.S., conducting more than 70 face-to-face interviews with the people who made Woodstock happen: producers, performers, doctors, cops, neighbors, shopkeepers, carpenters, electricians, lawyers, journalists, filmmakers, and an assemblage of just plain folks who, by design or circumstance, became part of the event. In my book, their collective story is told as a sort of conversation, as if all of them had convened in one gigantic living room, each individual contributing his or her own piece of the story at appropriate moments.

You can download the book's intro here. On this same page, you can also listen to the first few minutes of a two-hour audio documentary I produced, directed by Grammy Award winner David Rapkin, which will soon be available for sale from Audible.com. It contains the actual voices of those I interviewed: Abbie Hoffman, Wavy Gravy, Joe Cocker, Richie Havens, Joe Cocker, Miriam Yasgur (who, along with her husband, Max, owned the land on which the festival was held), stagehands, cops, kids in the audience, and many others. 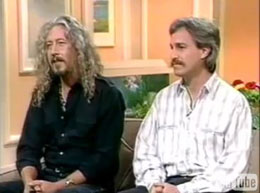 And you can watch two video clips from my 1989 book tour: me on "Oprah," with Country Joe McDonald and Riche Havens; and on NBC's "Today" show, with Arlo Guthrie and Michael Lang, one of the festival's producers. It was a fun tour.

Here's the Woodstock story in brief: In 1969 four young men -- two budding entrepreneurs who really wanted to write sitcoms, a former head shop proprietor turned rock band manager, and a record company executive who smoked hash in his office -- had a dream: to build a recording studio in Woodstock, N.Y. To finance it, they would produce the greatest rock concert ever held. Little did they know how enormous a reality their dream would become -- and what overwhelming hurdles they'd have to overcome, from crazed radicals to spoiled rockers to Governor Rockefeller.

By all measures, Woodstock should have been a disaster. Legally barred from its planned location just a month before its scheduled date, the promoters had to quickly regroup and relocate. In their haste, there was little time for planning certain facilities and amenities, some of which fell by the wayside. One key ingredient were the fences and gates, which never materialized satisfactorily, and the overflow crowds that showed up were admitted for free. The crowds caused traffic jams that paralyzed miles of highways, rendering them useless and requiring alternative measures to bring in food and medicine and supplies, and to evacuate the ill, among others. The National Guard and the U.S. Army got involved, as did a wide range of community, business, and religious organizations. It began as an exercise in hip capitalism; it turned into a multimillion-dollar financial nightmare for its producers.

And then it rained. And rained. The grounds, already muddy from weeks of summer showers, turned to muck as the skies opened repeatedly -- often violently -- during the festival weekend. Few who came were adequately prepared to camp out for three days even in comfortable climes, let alone in soggy, intensely overcrowded conditions. The fierce storms also threatened to bring down the structures, and to put the infrastructure -- electricity, water, sewerage -- in jeopardy. Needless to say, none of this aided the wellbeing of the countless individuals who had drunk, smoked, or ingested ungodly amounts of licit and illicit substances, many of whom had to be ministered to, one of whom died.

And yet Woodstock was not a disaster. Far from it. There was much joy and humanity, and heroics galore. Starting with a rag-tag crew of idealistic and energetic youth -- Woodstock essentially was financed and produced by those in their mid twenties to early thirties -- the festival's staff mushroomed into hundreds of hippies, hucksters, handymen, and hangers-on. As the plans became reality, these people met the troubles they encountered -- the weather, drugs, radical politicos, and on and on -- with high levels of ingenuity and integrity. It is ironic, albeit not surprising, that many of those involved liken being at Woodstock to having been through a war.

The festival is long gone, but the memories linger. Despite the passing of four decades, Woodstock continues to live on in the hearts and minds of many, including many of a younger generation scarcely born in 1969, some of whom have since made the pilgrimage to the festival site, perhaps drawn by the ghosts of Jimi Hendrix or Janis Joplin. Others seek to recapture the can-do innocence of a time in which young Americans were fighting a system they felt was unjust, and demonstrating, often with startling success, that there was a better way.

Indeed, if Woodstock demonstrated anything, it was that people, coming together for whatever purpose, can collectively find a better way, under even the most unpleasant of circumstances.

Musically, Woodstock may be but a footnote to the rich history of rock 'n' roll, but culturally, it helped to define a generation.

I hope you'll take a look. It's a fun book, and an amazing story.

From Woodstock to sustainability — a journey

My search for the Woodstock baby

Lessons for a corporate suit … from Woodstock

With the world heating up, who needs an event such as Burning Man?